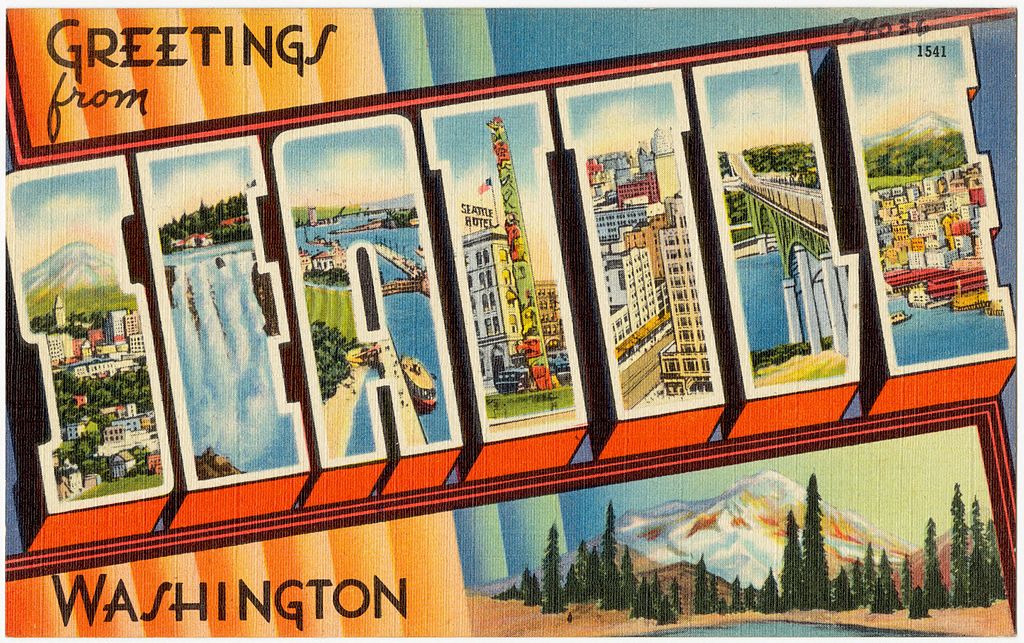 Let’s take a break from these pandemic times — a short beach vacation in the 1950s. Back then, this boy was brought up on One Morning in Maine.  I had a seashell collection.  My dream was to sail on a raft to south sea islands.  I read Kon Tiki.  I wanted to be a Norwegian.

I grew up in Washington state about eight miles from Puget Sound, a large and scenic inlet reaching inland more than 100 miles from the Pacific Ocean.  When we were little, the mothers of the neighborhood would take us kids down to a place called Picnic Point.  I remember it vividly, but with a shudder.

To get there we drove down a beautiful winding road under leafy alders and maples that made a luminous green tunnel following a burbling brook down to what in hindsight seemed a magical place.  The road ended at a rutted, muddy parking area abutting the Great Northern Railroad tracks from Seattle that swung east at the city of Everett heading for Chicago.  Double tracks curved around the point atop a broad berm of rock ballast protected by a sea wall constructed of huge stones.  The brook, reaching the beach via a culvert under the tracks, had built the point beyond, overgrown with brush and susurant trees. Fingerlings darted in its dappled shallows.

There was a hulking boathouse at the point where fishermen rented small dinghies to go out and reel in the big ones.  It was a busy place with rusty-wheeled pallets rattling up and down ramps launching boats with a splash and hauling them back up.  To get to the boat house fishermen drove their cars and boat trailers across a lumpy puncheon pathway over the tracks to the boat house pier.  This route provided the only access through tangled vegetation to the beach. Where the roadway reached the pier, a nondescript trail descended a sandy bank to a jumble of drift logs overgrown with beach grass.

In western Washington there are about two weeks in August when you can plan on half-way decent weather during a low tide.  On the selected morning the mothers packed cardboard boxes with packs of wieners and buns, jars of mustard, ketchup and relish plus bags of chips and marshmallows, a watermelon and table cloths, napkins, paper cups and plates, knives and forks, oddly well-wrapped glass and a large plastic pitcher in which to mix the Kool-aid.  Like a line of milling, yelling porters, excited kids were loaded down with boxes and directed toward the beach.  But first we had to cross the tracks.

There were no crossing gates, no warning signals, and surly fishermen growled and honked their horns as the gaggle of bearers wandered in several directions for the puncheons.  The brook was flanked by high headlands, and the tracks curved so sharply at the point that one could not see trains coming in either direction until they were RIGHT THERE.  If you were on the puncheon way, you had about 20 seconds to cross before the train ran over you.  The headlands also blocked sound.

Inevitably we would be struggling up the puncheon way or on it when the baleful headlamp of a gigantic lead diesel thundered into view, horn blasting like a trumpet of the Apocalypse.  They came at a furious pace, slowed not at all, and the banked tracks made it look like the monster was wheeling right toward you.

Boxes flew as we hurled ourselves screaming into thickets of Himalayan blackberries.  The deafening, jack-hammer pounding of passing cars and steel shrieking on steel lasted until the red-lit caboose disappeared around the headland taking the noise with it.

The mothers extracted blackberry thorns from sobbing children, sticking pieces of kleenix on the larger wounds. We gathered strewn supplies back into boxes and continued our desperate journey.  Leaving the road of death, we shambled down the sandy slope, stumbled across the drift logs and reached the upper beach.

In those sturdy days, logs served as picnic tables and benches. As we doffed our street shoes, threw off our clothes and scampered barefoot in our swimming trunks across the gravel, our mothers dutifully set the logs with tablecloths, plates, napkins, etc., all held down with beach cobbles.

Before us stretched endless vistas of stunning blue: blazing blue sky, hazy blue mountains across the deep cerulean Sound lapping on a miles-long beach half a mile wide.  I do not think plastic sandals had been invented yet, and only explorer scouts carried band-aids.  Parenting those days was informal at best. My father always enjoyed telling us as we went out to play, “If you drown, don’t come back!”  We didn’t care.  Train schmain, we’d made it.

But only as far as a dark green gauntlet of sea lettuce.  In the relative warmth of a Northwestern summer, it had bloomed into an immensely wide mass, and the morning sun had already baked its upper layers to a blackened crust.  It looked strong enough to walk on, but bare feet quickly broke through into the hot slime to packed cobbles armored with razor sharp barnacles.

Like corn in a popper, a few screams mounted into a staccato wail.  The gelatinous goo was also slippery, and we began to fall on our knees, elbows and on hands spread to steady ourselves, increasing the amount of skin to be gouged and lacerated.  A full- throated lament rose from bodies hull down in the reeking muck, while the mothers ashore, lowering their martini glasses, exhorted us to keep on going into the water; that it would be better there.

In high summer, the temperature of Puget Sound varies between 50 and 53 degrees, giving a swimmer about 30 minutes before they cramp up and die from hypothermia.  The initial relief we felt came from being numbed in frigid water.  We waded up to our knees, to our waists far into eel grass beds.  Weak from shock and loss of blood, we wandered zombie-like, stupidly unaware of where we were or what we were doing.

When the shivering began, survival instincts led us to slosh around and face the shore.  Small fish nibbled, absorbing our protein-rich blood.  Barely visible in the seaweed, large crabs threatened with upraised claws, sending us pressing away in terror under the scorching sun, saltwater drops on our skin acting like little magnifying glasses focusing intense, ultraviolet rays.

We lumbered toward shore on a rising tide, taking forever to make any progress.  Gradually we emerged, presenting the primitive spectacle of fish-things on stumpy fins dragging themselves gasping onto dry land.  But not quite yet.  There was still the sea lettuce.

Now submerged, what little cushioning effect it had on the barnacles was gone.  Afloat, it coated our legs in heavy, ragged globs.  Mercifully, instead of falling hard on the cobbles, we simply keeled over like half-dead seals, but the effect was the same.  The mothers had built a beach fire and were boiling hot dogs in a pan.  As we staggered ashore, blubbering, they held terrycloth towels toward us, but seeing the blood, thought better and dried us off with paper towels.  “You’ll be fine!” they chortled with doughty aplomb.  “You just need something to eat.”

Our thousand-mile stares did not stop them from plopping over-boiled wieners on our plates and giving us small paper cups of warm Kool-aid.  A stolid Calvinist-Manichaean ethic prevented their em-bunning or dressing our lunch.  “Isn’t this fun!” they asked rhetorically, “What a beautiful day for a picnic!”

Barely functioning memory led us through the motions of eating, ignoring buns or condiments, taking a slow bite of wiener that eventually fell back out of several mouths.  No one ate watermelon, and no one wanted to roast marshmallows over a fire that seemed preternaturally hot.

Then it was time to go.  The mothers briskly packed up, smilingly slipping lighter vermouth and gin bottles beneath the folded tablecloth while munching the remaining olives.  Graciously they carried the boxes, loading us only with bags of buns or chips but making sure we carried the marshmallows.  As blood pooled in our street shoes, we dragged ourselves up the trail, waiting impassively as another long freight blasted by.  Painfully, we inserted ourselves into cars, already feeling an unearthly heat somehow radiating from rufous body parts.

There followed three days of agony as second and third-degree burns healed slowly.  Our mothers smeared our crackly skins with Peter Pain’s ointment, but we could only sleep on our stomachs as epidermal sheets peeled away from keloid scars.  Days passed, weeks, and then it was back to school in the rain and an endless succession of dark, miserable days.

Time enough to forget and think again of a green tunnel winding down to the magical place.