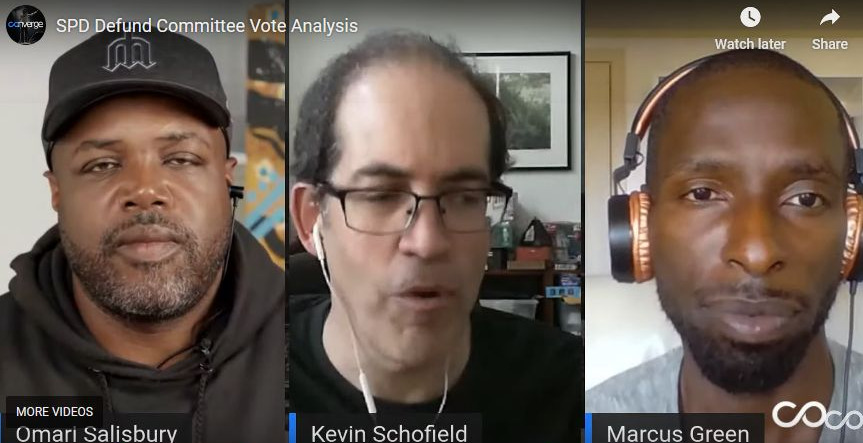 After the Vote: City Council’s Start To “Defunding SPD”

Earlier this week, The Seattle City Council tentatively approved amendments to the city’s 2020 budget that would begin the process of “defunding SPD.” The various cuts to the police department budget total to only about 100 positions out of a workforce of nearly 2,100 sworn officers and civilians, but as a down payment for meeting advocates’ demands for a 50% cut they suggest the direction that the Council is headed in.

Following the Council’s vote, I joined Omari Salisbury of Converge Media and Marcus Green of the South Seattle Emerald for a far-ranging discussion of the Council’s historic vote, what led to this moment, and the hurdles that lie ahead for the movement to re-imagine public safety in Seattle.  We discussed the origins of the 50% target, the politics that led to this point, and the deep, often acrimonious divisions in City Hall over the wisdom of moving quickly to cut SPD’s budget. Omari and Marcus explored the ways in which the Black community in Seattle has been systematically denied opportunities to gain and accumulate the kind of wealth that would resist the forces of gentrification – and asked what it would take to turn that around. And the three of us speculated on what happens from here: both the proposed changes to SPD in 2020 that are on the table, and the outlook for next year and beyond.

Kevin Schofieldhttp://sccinsight.com
Kevin is a city hall reporter and the founder of SCC Insight, a web site focused on providing independent news and analysis of the Seattle City Council and Seattle City Hall in general. In a previous life, he worked for 26 years in the tech industry in a variety of positions but most notably as the COO of the research division at Microsoft. Kevin volunteers at the Woodland Park Zoo, where he is also on the Board of Directors. He is also the Vice Chair of the Board of Trustees of Harvey Mudd College.
Previous article
Has ‘The Great Awokening’ Gone Too Far?
Next article
Chapters 27 & 28: Snake, and San Diego