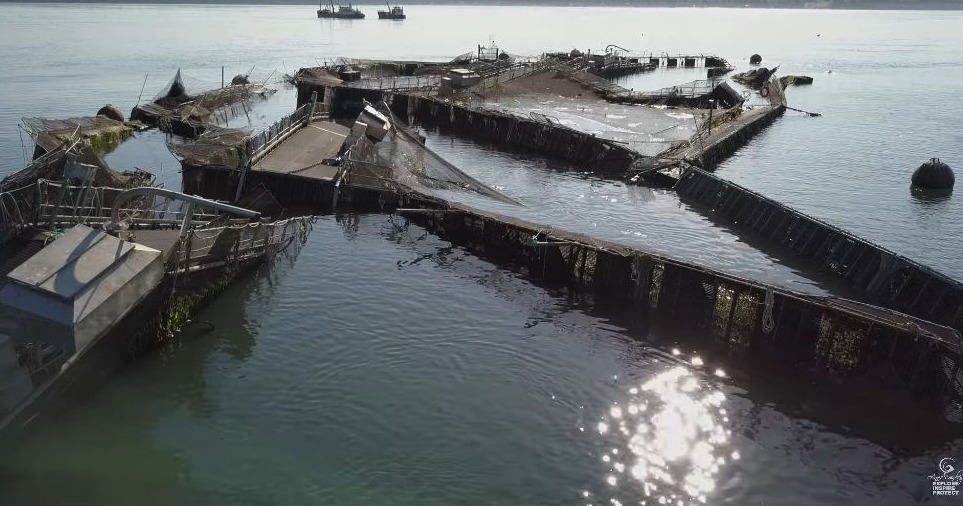 Cooke wants to replace the salmon with steelhead. Its leases expire in 2022.

Wild Fish Conservancy says it would use the tidelands for environmental restoration and public access. It has launched a public campaign to raise the money, expected to be in the low six figures.

But the legislation contained a loophole that Cooke is trying to exploit. Steelhead are native. So the company has applied for permission to switch. Earlier this year, the state Department of Fish and Wildlife (WDFW) said OK. WDFW has decided that a state environmental impact statement (SEIS) isn’t needed.

WFC, the Center for Biological Diversity, Friends of the Earth and the Center for Food Safety have sued the state arguing that WDFW low-balled the potential damage, including “impacts from net pen pollution to the benthic community, plants, and animals in nearby waters . . . from poor escape prevention and net hygiene practices, including the impacts from pen sinking . . . from farmed steelhead diseases, pathogens, and parasites on native species.” By not requiring a full impact statement, the plaintiffs say, WDFW violated the State Environmental Policy Act. Beardsley says he’s shocked that the state has chosen to fight against doing one..

He understands that some people once held high hopes for aquaculture in Puget Sound. (And Washington law still says the state Department of Agriculture has a duty to assist in the promotion and marketing of Washington’s aquaculture products.) The Sound’s potential for aquaculture — possibly pie-in-the-sky but widely accepted, not least by Senator Warren Magnuson, who in 1977 passed legislation to keep an oil port out of inner Puget Sound — became a rationale for keeping out big oil tankers, and the welfare of existing commercial shellfish operations a rationale for controlling pollution from farms and septics. But things haven’t panned out as some dreamers of the 1970s envisioned.

Of course, there’s plenty of aquaculture going on in the Sound and other Washington waters. The state is the leading U.S. producer of farmed shellfish. But even oysters are not without controversy. Some opposition to aquaculture operations, with their visible floats and docks, has come from people who don’t want anything obstructing their water front views. But some has had a more compelling basis. Last October, a federal judge vacated the U.S. Army Corps of Engineers’2017 permit for the shellfish industry. The industry can keep functioning while the Corps gets its environmental act together. Also in October, the shellfish growers’ group abandoned its appeal of a Department of Ecology decision not to let them spray the pesticide imidacloprid on shellfish beds in Willapa Bay and Grays Harbor to get rid of ghost shrimp.

And the Atlantic salmon industry clearly isn’t the wave of the future. Which perhaps should have been obvious much earlier. “Raising Atlantic salmon on the West Coast has always struck me as unbelievably stupid,” says Carl Safina, a professor of nature and humanity at Stony Brook University. “The lessons of introduced species were there way before Atlantic salmon were moved [to the West Coast].”

Wild Fish Conservancy thinks it can offer the state a better deal. The state Department of Natural Resources “has an obligation to look at both Cooke’s application and ours ,” Beardsley says, and has to weigh them to determine what’s in the public’s best interest.”

He argues that the choice is not merely between hard economic values and something fuzzier. WFC envisions “a commercial use,” Beardsley says. He points to “the importance of a healthy Puget Sound as an economic engine.” He says that when the net pens got international press for the salmon escapes “that wasn’t helping the image of the region ” And then “look at how much money the state had to spend” dealing with the escape. “What [Cooke] paid in lease rent doesn’t cover their costs.” Put that all together, and “there’s a great economic discussion we’d like to have.”

“There’s nothing wrong with a bad idea,” Beardsley says. The problem is “actually going forward with one.” He recognizes the genuine optimism and idealism of 40-odd years ago. But he argues that by now it’s clear that “aquaculture was an experiment that didn’t turn out as advertised.”