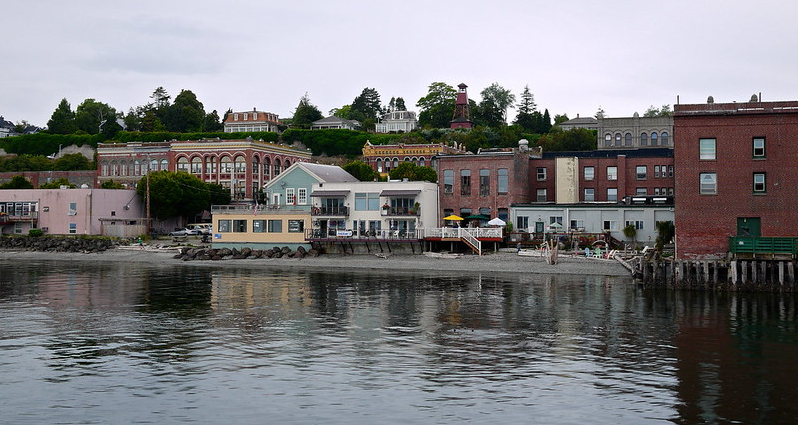 For decades, Seattle boomers have been tripping off to Port Townsend for weekends of beach walks, wooden boats, gift stores and good food.  Visitors have helped sustain a small town culture known for its arts community, affordable old homes and living-wage jobs at the local pulp mill, boatyard and hospital.

Over time, those weekenders started buying some of those little houses, fixing them up or tearing them down to build nicer houses.  And that was ok – to a point.

And now? Forget it. Aging baby boomers have transformed the town into a retirement enclave with a median age pushing 60.  That means half the population would qualify for the Denny’s senior menu.  If the town had a Denny’s, which it does not.

These demographic changes bring an array of consequences, and we’ll get back to that. But first, consider the data. According to one analysis, Jefferson County is now the nation’s third oldest county with a population of 20,000 or greater.  The median age is 20 years older than the state and national medians, and 10 years older than neighboring Clallam County, another retirement community, where the median age is 50.

How this has happened is no mystery.   While the population is growing slightly, the natural rate of growth is actually negative. From 2010 to 2019, Jefferson County reported 1,744 births and 3,336 deaths – a stunning decline of 1,592. This, however, was offset by migration from Seattle, California and beyond. If it weren’t for in-migrants – mostly retiring boomers — Jefferson’s population would be shrinking.

There are some upsides to the invasion.  Most of the newcomers are financially sound, thanks to their retirement accounts and the sales of their city homes. Their incomes are far less vulnerable to economic downturns, including the pandemic.  And boomers volunteer in droves at the food bank and schools, and at signature festivals.   All that helps.

Take health care.  An aging population means that Jefferson Health Care and other local providers are being reimbursed largely by Medicare and, to a lesser extent, Medicaid.  Those reimbursements are generally more stingy than private insurance plans – as low as 20 cents on the dollar, according to Amy Yaley, communications director at Jefferson Healthcare.

To balance their books, healthcare providers say they need a minimum of 20 percent of their payments to come from private insurers.  Jefferson gets more than 78 percent of its reimbursements from Medicare and Medicaid, and the percentage is likely to increase with the pandemic.

“Primary care doesn’t pay the bills,” Yaley says.  “So we have to be more creative.”

The strategy has been to develop specialty services – rehabilitation and cardiology and elective surgery such as knee and hip replacements.  Those services tend to pay for themselves and help offset the losses from primary care, Yaley says. But those services were closed down to deal with the pandemic.

What healthcare providers need is younger clients with fewer health issues and private insurance.  And that is not happening.

And schools? The good news is that local seniors have supported school taxes,  including the $40 million bond issue to build a much-needed new elementary school.  And the schools benefit from retirees who volunteer as mentors and classroom aides, says outgoing superintendent John Polm.

But local demographics also contribute to a steady decline in enrollment, as retirees replace families in the local housing market.  Every student lost translates to a loss of state dollars for local schools.

At the same time, the spiraling real estate market makes it tougher to recruit and keep teachers and staff.  “We have teachers commuting from Poulsbo and Port Angeles because they can’t afford to live here,” Polm says.

There lies the rub.  As retirees flock to Port Townsend, they affect both the supply and price of homes.  The median price of a home here increased by 50 percent in just three years, from 2015 and 2018.

Newly-arrived boomers can afford it. They’ve sold their homes in Seattle or California, and can pay those six and seven-figure prices for homes that previously sold for five figures.

And they can pay cash, which makes a difference when there are multiple bids for a home, says Michelle Sandoval, Port Townsend’s mayor and a prominent local realtor.  “Younger people who need loans get beat out by retirees who can offer cash.”

Some of those new homeowners don’t even live in town, she says.  Affluent boomers can afford to split their time between Seattle and Port Townsend, so perfectly good homes sit empty for much of the year while younger people are forced to buy out of town.

That explains Port Townsend’s morning and evening rush hours, with hundreds of working-age people commuting from Quilcene or Sequim to their jobs in the schools, hospital and mill.

Rising home prices also increase property taxes, she says.  “People from out-of-state like the fact that we have no income tax.  But they get here and complain about school levies.  It doesn’t make sense.”

What can be done about this?  It’s tricky.  Government has been trying to deal with housing issues for decades – with housing projects that turned into slums, or subsidies to private builders that inadvertently enriched wealthy slumlords.  It seems to be an issue that defies both market economics and liberal solutions.

Sandoval and others have been looking at programs focused on home equity.  Boomer retirees tend to have an average of nearly 50 percent equity in their homes – equity that has increased not because of hard work, but because of the whims of rising home prices. Is there a sensible way to capture some of that equity and transfer it to younger buyers who need to get a start in the market?

People are looking for something that works.  Housing Solutions Network is a Port Townsend nonprofit that is looking as far as Vermont, California and Hawaii for ideas.

Meanwhile, locals fear the economics may worsen with the pandemic, which could easily hasten the migration from cities to more rural and safer enclaves like Port Townsend.

Thanks to Post Alley contributor Michael Luis, of Michael Luis Associates, who offered data and analysis for this piece.

Ross Andersonhttps://rainshadownorthwest.com/
Ross Anderson is a founding member of the Rainshadow Journal collective. He retired to Port Townsend after 30 years of journalism at the Seattle Times.
Previous article
Back in the USSR: Trump’s Putin KGB Playbook
Next article
Chapters 8,9 & 10: WAC, Sixth Avenue, and the Nordstrom Grill