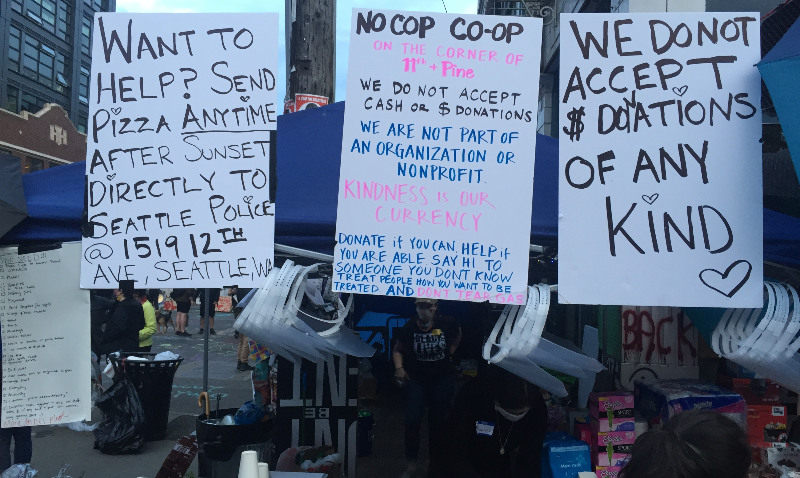 Last weekend I wrote a piece for Politico on what was then called the Capitol Hill Autonomous Zone. It started by critiquing Fox News’s breathless coverage of and commentary on CHAZ (since renamed CHOP, the Capitol Hill Organized Protest). Tagging misrepresentation and misinformation on Fox may be fishing in a barrel, but it seemed worth the effort this time because the network had covered the occupation so obsessively and, it seems, influentially, while accusing other media of ignoring it.

In contrast to the “totalitarian takeover” by “domestic terrorists” invoked by Fox, I wrote that I saw, over the course of three days, what

Wednesday and the night before, I still saw none of the enforced checkpoints or general intimidation alleged on Fox and social media. But some of the street-fair energy had gone out of the occupied zone. The mood seemed edgier and the nighttime streets meaner, and organizers labored, in the way of uprisings everywhere, to present a focused, unified message.

On the previous sunny Sunday, the street fair / Burning Man gestalt overwhelmed the zone, as “tourists” (as many participants describe them) flocked to Pine Street. One hand-scrawled sign hanging on the fence at the adjacent playfield sums up the feeling: “If you find yourself thinking this is turning into Coachella, ASK YOURSELF, WHY am I HERE?”

Some of the pop-up stations dispensing free food and you-name-it, including an “interfaith chaplin” table, had disappeared . The Conversation Cafe was still going strong, however—rebranded, like CHAZ/CHOP itself. “The name now is Decolonization Conversation Cafe,” its founder, Jordan Lyon, explained in an email. “Talked more with some of the black community’s leaders and that just made sense to always bring all the conversations and focus back to the core mission of dismantling racism in Seattle.”

After the tourists left, a less benign sort of camp follower descended on the zone. CHOP had avoided the window and storefront smashings that downtown suffered during previous weeks’ demonstrations. Saturday night, however, a young man with no apparent protest affiliation broke a store window and fled. Some of the “nightwatchmen” (some of them women) who guard the approaches and patrol the zone helped clean up the damage and guard the premises while the owner went to call a glass company, and he thanked them.

Sunday night, it happened again. A burglar broke into Car Tenders, a European-car-repair shop a block outside CHOP on 12th, stole some cash and keys, and used hand sanitizer to set the counter afire. Owner John McDermott and his son Mason extinguished the fire, caught and held the intruder, and repeatedly called 911. Police, avoiding confrontation with protesters, declined to come. A group toppled the shop’s movable chainlink fence (which they later set back in place) and, in a tense faceoff, forced the McDermotts to release the burglar. (How can you turn a burglar over to the cops when you’re trying to defund them?) Mason McDermott, standing guard two nights later with a pistol at his waist, told me they clearly knew him.

According to police charging papers, described in the Seattle Times, when the burglar reappeared in the zone, a protester punched him repeatedly, a brawl erupted, and he escaped. His caper seems part of a spree rather than tied to the protest; he was arrested the next night trying to steal a car from a White Center repair shop, and had been arrested and released twice Friday for breaking into a Sodo Mercedes dealership.

Tuesday morning, after days of negotiating with the protesters to reopen the zone to emergency vehicles and residents, the Seattle Department of Transportation installed a line of two-ton concrete blocks down the middle of Pine Street and 12th, forming a one-lane traffic channel. At the same time SDOT removed many of the metal and plastic barriers left behind when the police evacuated the precinct station on June 16. It wrapped the new blocks in plywood crowns to take the paint that would inevitably come—providing a new mural surface where so many had already been covered.

Sure enough, by day’s end the crowns had been sprayed and in some cases brushed over with familiar slogans, plus a new one: “These are not ‘barricades,’ they’re bullshit!” Whether cannily or coincidentally, the city had managed to disrupt the protest geography while protecting it. The concrete snake, with its inevitable evocations of the Berlin Wall, doesn’t just dampen the mood in the occupied zone. It divides the junction at 12th and Pine that was the protest’s zocalo, where hundreds packed in, pandemic be damned, to be inspired by speakers, poets, and other spoken-word artists MC’d by Nikkita Oliver and other local racial- and social-justice luminaries. On Wednesday just a few dozen gathered on one side of the new barrier for similar presentations.

The occupation’s center of gravity has moved to the Astroturfed playfield next door, lined with tents and farther from the shuttered police station. Hundreds, perhaps a thousand, assembled there at a rally later that afternoon calling on the county labor council to expel the reform-blocking and, under president Mike Solan, increasingly hardline Seattle Police Officers Guild. “Go home and tell your parents who are in unions to tell the Police Guild to go!” one speaker roared. That evening the labor council membership voted to do just that.

One speaker had some pointed words for the mostly white attendees as well: “I know a lot of you come here for the free food. But you need to come as an ally or a person of color.”

On the way to the labor rally, I caught Maurice Cola, an occupation organizer widely seen on Twitter last week announcing the change from CHAZ to CHOP, as he hurried to an open-air meeting of the protest’s managing council. Sorry, I couldn’t attend the meeting, he said—for my sake. “It’s going to get pretty heated,” he said. “There’s a lot of infighting.” As the occupation enters a new phase, Cola explained, “we need to figure it out. It shouldn’t be a party. The city is getting comfortable with us, and they should be uncomfortable. That means we need to be uncomfortable.”

Still he had high hopes and big ambitions: “We’re going to take this across the country. We just need to make sure it’s all established here first.” The meeting, viewed from outside earshot, did not look particularly heated. The participants, nearly all Black and male, did not include Raz Simone, the rapper rightwing commentators tagged as the “warlord” of the “totalitarian takeover.”

For those spending very long hours manning and womanning the diminished barricades at the CHOP entrances, “establishing” means protecting, an increasingly anxious business. Their prime fear is not a phalanx of police spraying tear gas and Mace but a carload of militants driving into the crowd and spraying bullets. The day before police evacuated and CHAZ formed, a man did drive into the protest at this same site with his Glock beside him and shot the protester who tried to stop him and, apparently, pull him from the car.

Some of the nightwatchmen bemoaned the new concrete dividers. “These actually make it less safe,” one fumed. “Now a car full of AR15s could just drive in.” Some talked of using a heavy prybar and floor jack to move them aside, and wondered if a nightwatch meeting scheduled for 4:30 a.m. was about just that. Apparently not — the blocks still stood the next day.

By day the watch duty is light, mostly opening the barrier (now just a folding chair at the east entrance) to let drivers through. At night, however, the watchers assemble in teams, checking in by walkie-talkie and making sure a member of each is armed. They chat and joke but scan the streets. They say Proud Boys—far-right (many say neo-fascist) streetfighters who insist they are “Western chauvinists” rather than white supremacists—have wheeled by taunting them. One says he was surrounded by a pack on dirt bikes as he walked along Aurora Avenue; they glared a warning and sped off.

Armed tensions may even be reaching into the rarefied, organically stocked aisles of PCC, the upscale local grocery chain often associated with progressive causes. A few days ago a man carrying a semiautomatic rifle walked into the Greenlake PCC store, causing predictable consternation. A manager says he just used the restroom and walked out. A spokesperson says PCC asks customers not to bring firearms and orders staff not to and adds, “The situation [in question] was not connected to any recent local demonstration or activity.”

“American Patriots Retake The Seattle Occupation Zone For America,” an invitation on Facebook announces, right under the obligatory corporate warning to “avoid large gatherings” during the pandemic. “On July 4th, Independence Day, a coalition of patriot groups and all who want to join are going to retake the Capitol Hill Autonomous Zone for America. antifa [sic] members are illegally occupying public property and terrorizing small businesses in the neighborhood. We will meet at CenturyLink field throughout the morning and then in the early afternoon march on the CHAZ.

“You do not need a bike to join. Any and all patriots with all vehicles are coming to this event.
“We are not coming to commit violence or break the law…. Instead, we will establish a base of operations in CHAZ and permanently occupy the zone for American Patriots. We’ll set up a patriot base camp and it will be staffed 24/7 by patriots both local and national.” Among the items to bring: “graffiti remover,” “sandbags (for the base camp),” and “patriot and maga gear.” Each patriot can decide, or already knows, what constitutes such gear.

The tone and the staging ground for this “retaking”—a secured private stadium—flag it as a hoax or bluff. Nevertheless, 2,100 people have clicked “going” and another 18,300 are “interested.”

Will occupation beget further occupations, here or elsewhere? This could be a rough summer. And that’s before all the new Covid-19 cases emerge from this and other marches and rallies, as seizing the political moment has over-ridden social distancing.

Eric Scigliano
Eric Scigliano has written on varied environmental, cultural and political subjects for many local and national publications. His books include Puget Sound: Sea Between the Mountains, Love War and Circuses (Seeing the Elephant), Michelangelo’s Mountain, Flotsametrics and the Floating World (with Curtis Ebbesmeyer), The Wild Edge, and, newly published, The Big Thaw: Ancient Carbon and a Race to Save the Planet.
Previous article
Masks: Now more than Ever
Next article
Sin and the Nature of Structural Racism