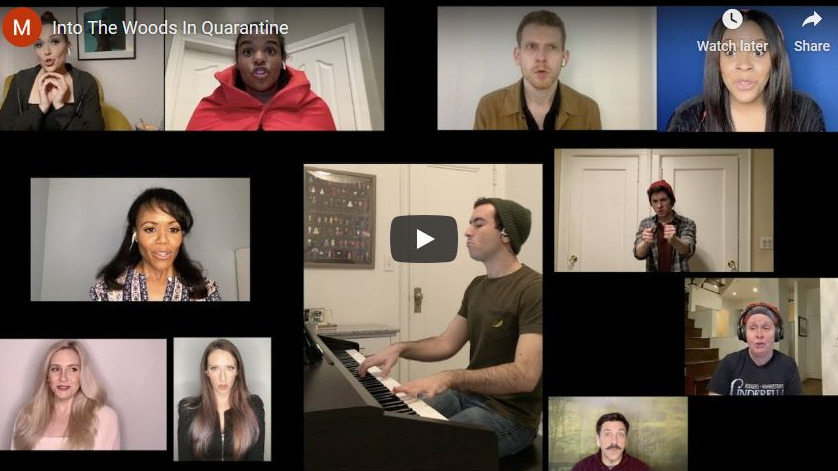 The Arts Online: Ten Great YouTubes that wouldn’t have been made without Lockdown

Since the lockdown in March, our public arts life has moved inside, or rather, online. There are thousands of great archived performances to choose from. But with performance schedules disrupted, artists began creating new work online. Soon after that, the mosaic video — artists performing by themselves in their homes and the videos stitched together in a checkerboard — became a cliche. But almost immediately the online forms began evolving.

Here are ten compelling videos that wouldn’t have been made without the lockdown:

Juilliard started busting the mosaic with an end-of-year video of an “evolved” version of Ravel’s Bolero, which takes a slight modernist detour in the middle. It is one of the first mosaics that plays with the form, using the video boxes as pieces on a larger canvas.

Pushing further, Juilliard started producing a series of short videos to thank first responders. Somehow, musicians have stuck to the idea that watching musicians saw away at their instruments is inherently visually interesting. Mostly it isn’t. Here, however, the visual editing is riveting — helping to guide the ear, but also proving to be compelling in its own right.

The Stay At Home Choir is pretty much what its name says — 732 singers from 52 countries submitted recordings of Billy Joel’s And So It Goes and the recordings were stitched together to back the King’s Singers.

Here are dancers of the Paris Opera Ballet at home and outside. It starts off conventionally, flashes a sense of humor, then throws in some moves that would be possible on a stage.

This performance of Sondheim’s “Into the Woods” is as good as it gets. First, the individual performances are outstanding, and pianist Max Grossman (who also conceived of, directed and edited this) is propulsive. But more interestingly, the moving around of the characters on the screen — solo, in groups, etc — not just directs the eye, but leads you through the narrative.

Over the past ten years, The Public Theatre in New York has produced a series of plays about the Apple family. Playwright Richard Nelson brings back the cast for a play on Zoom. “This hour-long play picks up with them during their now suspended and quarantined lives. They talk about grocery shopping, friends lost, new ventures on a hoped-for horizon.” All discussed in the form of an entertaining Zoom call.

Mark Morris is a very physical choreographer and something of a technophobe to boot. But — as he told the New York Times, lockdown isn’t a pause from your life, it’s your life. So you make with what you’ve got. And he made four Zoom dances, of which I like “Lonely Waltz” the best.

Pushing things with a bit more polish is Moving Assembly Project from the UK and South Africa and its video #BeyondBorders, which gets out in the city, and uses graphics imaginatively, all while social-distanced.

For something completely different, many solo artists have taken to YouTube stripped of their usual production values to play at home. Norah Jones has been giving almost daily mini-concerts, sitting at her spinet piano accompanying herself. They couldn’t be more informal, and she sounds terrific. This is one of my favorites in her series — a birthday tribute to Willie Nelson.

And finally — here’s bass player Leland Sklar, who’s played on more than 2000 recordings with many famous bands. Mr. Sklar sits in his room with is bass — his “peace and love” bass — playing tracks on which he’s performed. On this edition he spends the first nine or so minutes talking about what he’s going to play and some background, then reaches over and switches on some Jackson Browne — minus the bass track — and plays along. It’s mesmerizing. He’s really good.

Douglas McLennanhttps://www.artsjournal.com
Doug is a longtime arts journalist, and the founder and editor of ArtsJournal.com, he's frequent keynoter on arts and digital issues, and works with a number of arts organizations nationally.
Previous article
Capitol Hill’s Occupied Zone and how it Happened
Next article
Why is Seattle so Good at Iconic Moments of Radicalism?