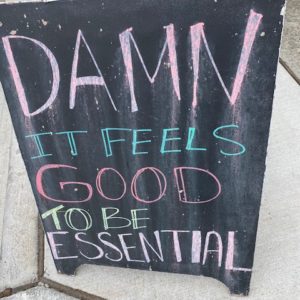 During the COVID crisis President Trump has done two things to express his support for religious institutions and curry favor with his evangelical Christian base.

Most recently he declared worship “essential” (though not for him). He indicated that governors better buckle to his command. “So I’m correcting this injustice in calling houses of worship essential. I call upon governors to allow our churches and places of worship to open right now. If there’s any question, they’re going to have to call me — but they’re not going to be successful in that call.”

While it’s nice to be dubbed essential, the source is wrong. God calls us to worship, not a President or other political leader. Moreover, gathering in a church building is not the only way for people to worship, as the ubiquity and power of worship that is live-streamed, ZOOM-ed, or pre-recorded has demonstrated. Even if these technologies did not exist, God and God’s people would find a way.

But the underlying problem here is the politicization of the church and other religious institutions. They and their worship become instrumental of partisan political ends, that is, politicized. This never ends well for churches because they get confused about where their loyalties lie and what their function is.

While religion should be political — that is, involved in the world and civic life — it should avoid, like the plague, being partisan — that is, put in the service of one political party, President or ideology.

The other move Trump has made during COVID was to include churches in those eligible for to participate in the Paycheck Protection Program or PPP. Apparently, quite a few religious institutions have applied and received funds to insure the paychecks of their staff. Last time I checked the First Amendment, the government was forbidden from establishing religion or any particular religion. PPP eligibility seems to me to be like, if not establishment then certainly a step in that direction. And, again, it makes churches, synagogues, and mosques, beholden to the wrong Lord.

As my colleague, Rebecca Spencer, pointed out in an email, you can almost hear the death-knell ringing for the exemption of religious institutions from taxation as PPP is enacted. That exclusion from taxation is also part of dis-establishment. If taxpayers are picking up the paycheck for religious workers, why shouldn’t those institutions pay taxes like others?

As noted churches should be involved in the world of society and politics, not inhabiting such other-worldly spiritual ether. But that’s different than being partisan.

Trump has worked hard, harder than any of his predecessors, to gather evangelical Christians and their leaders under his protective and privileged umbrella. But that may backfire. Not so much for Trump who, whether this year or another, will pass. But for religion and for the churches.

Those already suspicious of religion will have more and legitimate ammunition with which to question religion’s role and integrity. Meanwhile those who are religious may eventually discover that their freedom to serve God has been so badly compromised that they have lost their fundamental reason for being.

Anthony B. Robinsonhttps://www.anthonybrobinson.com/
Tony is a writer, teacher, speaker and ordained minister (United Church of Christ). He served as Senior Minister of Seattle’s Plymouth Congregational Church for fourteen years. His newest book is Useful Wisdom: Letters to Young (and not so young) Ministers. He divides his time between Seattle and a cabin in Wallowa County of northeastern Oregon. If you’d like to know more or receive his regular blogs in your email, go to his site listed above to sign-up.
Previous article
We’re Number 29!
Next article
The Coronavirus Pandemic Adds New Twists to ‘The Good Death’