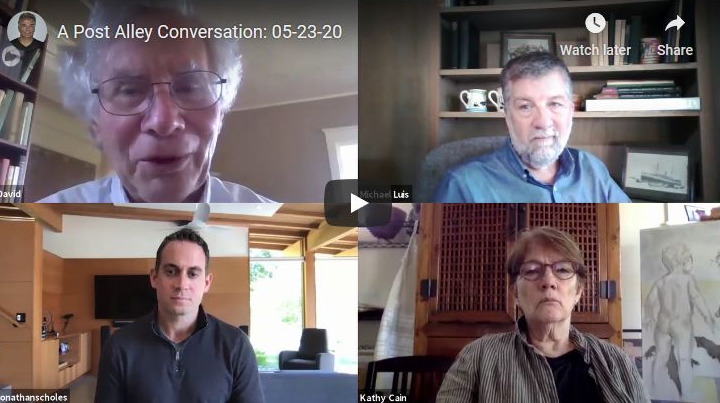 Here is another live conversation with Post Alley writers and our guest, Downtown Seattle Association CEO Jon Scholes. Our topic is all the adverse factors now hitting downtown — retail, office use, transit, arts, visitor-sector — at once. Taking part from Post Alley are David Brewster, moderator and a founding editor of Post Alley; Michael Luis, a public affairs analyst and expert in urban matters, as well as editor of the new data-analysis service, Puget Sound Indexer; and Kathy Cain, a writer and frequenter of the high-character spots in Seattle’s downtown. Ms. Cain was juggling another Zoom obligation at the time, and so dodges in an out of this lively conversation.

Guest Jon Scholes has been with Downtown Seattle Association since 2008, and CEO since 2012. DSA is an influential group drawing members and issues from a broad sweep of downtown neighborhoods, from lower Queen Anne to the International District, and waterfront to Broadway on Capitol Hill. Under Scholes, the DSA scope of issues has broadened considerable, including social welfare topics, to where it is today perhaps the most influential of Seattle’s business and civic associations.