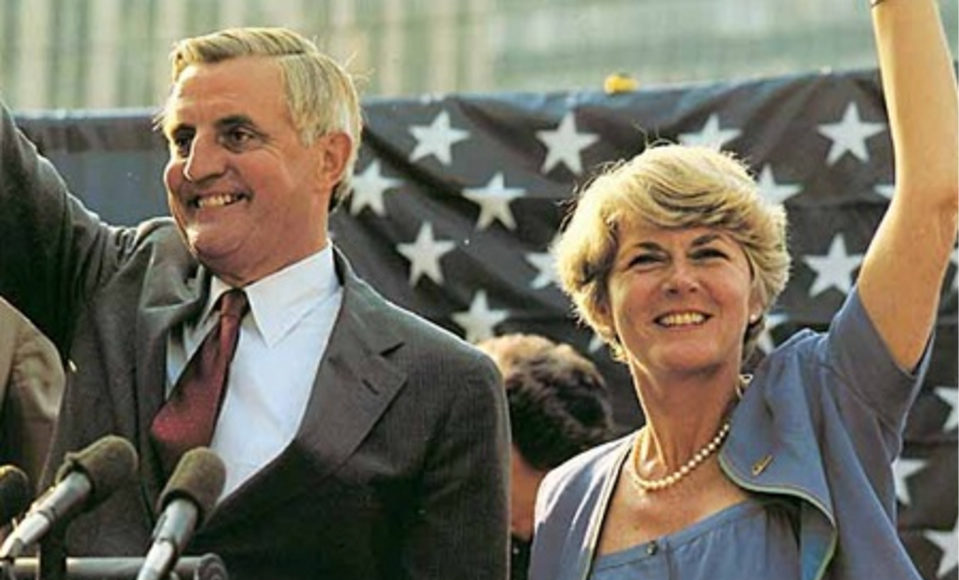 As Joe Biden cautiously moves toward naming a running mate, he may recall the high and low points of the Democrats’ first venture in this direction: the 1984 selection of Geraldine Ferraro, a little-known congresswoman from Queens, to join Walter Mondale on a ticket to oblivion.

Biden would surely have been in San Francisco—he was a two-term U.S. senator by 1984 — and the excitement of this break in the gender barrier created a moment that was quickly swallowed by the inevitability of President Ronald Reagan.

For this reporter, it was the last of eight national conventions, rivaled only by my first, the 1968 Battle in Chicago. San Francisco—particularly because of the city’s liberal legacy—produced a respite from what loomed as a losing year. Both feminism and the gay movement were rising in political and journalistic circles in 1984 and both found a home in San Francisco. State delegations were feted by both movements; I remember Oregon delegates (most of them very straight) crowding chic apartments to sip wine with leaders in the gay community.

The choice of a female running mate produced genuine excitement, more than the usual partisan venting at these conventions. There was in the air a sense that a barrier had been crossed, regardless of the outcome.

In his comprehensive obituary of Ferraro, who died in 2011, Douglas Martin in the Times described some of this excitement: “Ann Richards, who was the Texas state treasurer at the time and went on to become governor, recalled that after the Ferraro nomination, ‘the first thing I thought of was not winning in the political sense, but of my two daughters. To think,’ Ms. Richards added, ‘of the numbers of young women who can now aspire to anything.’”

I confess to being seized by a similar emotion, and in a commentary for King’s television stations related it to my own daughter, at that time serving with the Peace Corps in Africa.

The excitement of the day quickly faded, of course, but it left in its own way an indelible icon—absolutely the best political poster of my time—an adaption of the famous Eugene Delacroix 1830 painting, “Liberty Leading the People.” Artist Kip Overton adapted the classic to show Ferraro as Liberty, with Mondale in a top hat bearing an ERA banner. An inset of the original painting is at the bottom of the poster; it hangs in the bathroom of a dear friend, and I smile every time I use the facilities.

Ferraro certainly didn’t lose that election for Fritz Mondale—he won only his home state of Minnesota, plus the District of Columbia. But she didn’t help, either; so often, running mates don’t deliver actual votes.

What Biden surely took away from 1984, however, is the necessity to vet not only the candidate, but—in this case—the candidate’s spouse. Ferraro was a good campaigner, personable and also well prepared by three terms in the House, where she was mentored by Speaker Tip O’Neill. That relationship was a major factor in Mondale’s choice. In reality, the decision to pick a woman as running mate left him with a small list of potential candidates.

By 1984, a promising crop of women was making its way in the House, but there were still only ten other Democrats, including Pat Schroder of Colorado, who in 1988 would make a serious bid for the presidency; and Marcy Kaptur of Ohio, who still serves from that era. There were no Democratic women senators and only one Democratic woman governor, Martha Collins of Kentucky.

Vetting what was surely a small pool did not uncover problems with the business connections of John Zaccaro, Ferraro’s husband. In time, the couple were forced to reveal their tax records, producing yet more questions and allegations and preventing Ferraro from gaining a real footing on the campaign trail.

Much has changed since 1984, not least of which is the field of women candidates. In 2020, 101 women hold seats in the House and 26 in the Senate, and they are overwhelmingly Democrats. Washington Sen. Patty Murray is the dean of the Senate women. Elected in 1992, Murray is the only serving female senator elected in the last century. Nine women serve as governors, of which six are Democrats.

Biden’s vetting team has a lot more ground to cover as multiple names appear to be in contention—or at least in speculation enough to spark media interest.

In contrast to Zaccaro, who was prominent enough at the time to demand some serious vetting concerns, Democratic spouses this time around don’t appear to raise similar concerns—although the intense partisanship of the times lowers the barrier. Mostly, the spouses are non-political in their own rights, without apparent financial pitfalls. Three spouses are attorneys married to sitting senators, one is a journalist, one a mayor; one potential candidate is a widow, another unmarried.

Sen. Kamala Harris’ husband, Douglas Emhoff, is a veteran private attorney in Los Angeles, dealing primarily in intellectual property and including as his clients movie studios, former athletes and wine companies, according to CNBC. “On a separate 2018 Senate financial disclosure form, Harris says the couple had between $2.5 million and $5.8 million in assets. They mostly held the wealth in mutual funds, along with bank accounts and retirement plans,” CNBC reported last July. Most of the Harris-Emhoff assets are in real estate: they own homes in Los Angeles, Washington D.C. and San Francisco, three of the nation’s hottest realty zones.

If the Harris-Emhoff partnership provides at least a bit of vetting to turn up clients of potential embarrassment, Senators Elizabeth Warren and Amy Klobuchar are married to academic lawyers without the conflicts that go with private law practices.

Warren and her husband, Bruce Mann, have accumulated an estimated $12 million in assets, according to Forbes, and—like the Harris-Emhoff couple—most is property in hot markets; they own homes in Cambridge, Mass., and Washington D.C.. Mann is a law professor at Harvard, as was Warren. In the case of Senator Warren—unlike that of Klobuchar or Harris—her veep chances may be moot, as Democrats would gamble the seat in a special election in early 2021, due to a quirky Massachusetts way of filling a vacant seat. The outcome could decide control of the Senate.

Klobuchar’s husband, John Bessler, is a law professor at the University of Baltimore School of Law and an expert on capital punishment; he is also an award-winning author in both law and history. His private law practice was in Minnesota, where he retains an “of counsel” status. The couple has assets of about $2 million, according to Forbes.

Susan Rice, the former Obama ambassador to the United Nations, is married to a journalist, Ian Officer Cameron, a Canadian who has been a producer at ABC News since 1998; he is currently executive producer of “This Week with George Stephanopouos.”

Rice’s current affiliation is at American University as a Distinguished Visiting Research Fellow in the School of International Service at the university, and she is also writing a new book. One of the more controversial of Obama’s top officials, her vetting as a potential veep would likely concentrate on politics, not conflicts of financial interest.

Much less is known about three other women whose names are floated for veep. Stacey Abrams, the Georgia legislator who shot to national prominence with her close run for governor, is a single woman and the daughter of two ministers. She has, however, been both an entrepreneur and founder of nonprofits, areas that could yield conflicts of interest.

Congresswoman Val Demings, whose performance at the Trump Inpeachment hearings drew attention, is a lifelong police officer and chief, as is her husband, Jerry Demings. But he is also the mayor of Orange County, which includes Orlando, and is the only spouse with an active political career. Both Demings followed the career path of patrol to chief over their long careers in the Orlando Police Department.

Gov. Michelle Lujan Grisham of New Mexico, who has an outside chance at the nomination, served three terms in Congress in addition to the governorship. She is the first Democratic woman to govern the state, which has a large Latino population. She has also held other state offices, and her family is influential in the region. She uses Lujan Grisham as her professional name; her husband, Gregory Grisham, died in 2004. She is the most prominent Latina under consideration by Biden; I have not seen any vetting issues, although her family’s prominence will be explored.

I’m not sure if Walter Mondale, now 92, will attend this Democratic convention (if there is one), but if he does, I hope they will unfurl that poster when they introduce him. It may bring a tear, or at least a smile, to veterans of ’84 in the crowd.

Floyd McKay
Floyd J. McKay, emeritus professor of journalism at Western Washington University, covered Pacific Northwest politics as a reporter and opinion writer for four decades, primarily in Oregon. He was commentator/news analyst at KGW-TV (King Broadcasting) from 1970 to 1987. Previously a print reporter, he returned to print and online reporting and commentary from 2004 to 2017 with the Seattle Times Op-ed page and Crosscut.com. He is the author of Reporting the Oregon Story: How Activists and Visionaries Transformed a State (Oregon State University Press, 2016). He lives in Bellingham.
Previous article
Remembering Lynn Shelton, Storyteller
Next article
The Long, Slow Fade of Mainline Protestant Churches