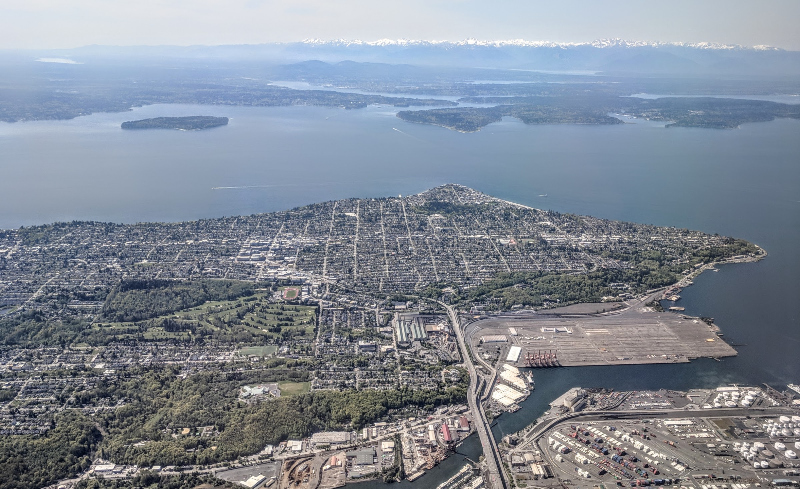 I fear the city, as with the Viaduct Thirty-Year Wars, is going to tie itself into Gordian Knots over how to replace, whether to replace, how to fund, and how many scooter lanes for a new bridge. Nothing this city likes to do more than heat up debates about transportation and make them “existential.”

Maybe there’s a way to finesse all this and reconceptualize the issue.

Start with two dramatic planning opportunities. First, West Seattle needs to embrace its sudden transportation isolation and become more self-contained, more self-sufficient, less dependent on connections to the rest of the city. Second, and relatedly, we need to rediscover and redevelop the Duwamish River. What’s a big city without a big river?

To begin with the case for a quasi-independent city-state of West Seattle. Start with realizing that the big bridge is going to be out of service for probably 5-10 more years, so West Seattle is effectively marooned. How about making the best of it by developing it as an independent city, with more jobs, affordable housing, lots of Capitol Hill-style shops and cafes and cultural vibe? (Already, West Seattle voters are pretty similar to Capitol Hill voters, maybe because so many have fled to affordable apartments and homes across Elliott Bay.)

The West Seattle peninsula already has Seattle liberal politics with small-city neighborliness but free from the high prices and the Amazon Effect (“the prosperity bomb,” as Danny Westneat calls it). Median monthly housing costs are $1,556. The workforce is 6-to-1 white collar over blue, with 52% having some college education; median household income is good but not elite: $73,849. Seattle’s is $93,000. Population of West Seattle is just right for a small city, 79,914, comparable to Kirkland and Bellingham. (Source for these figures is 2018.)

One of the major arguments for walkability and environmental stewardship is to place residences closer to workplaces. So why not urbanize cozy West Seattle? California Ave SW is already the long main street for this peninsular city. The proud region has psychologically seceded from high-rise, high-toned Seattle. West Seattle has a good blog, a good theater, a good bakery, beaches and parks and a community college that could graduate to a bigger institution.

The trick is to leverage the transportation problems into urban pride, much as Bellevue (also cut off from easy access to Seattle) has done, turning itself into a twin city, not a suburb. When you think about it, the Seattle area is full of these quasi-independent sub-cities, partly cut off by water and bridges, and underscored by Seattle’s new district system for electing the city council. The club, a kind of Hanseatic League, is already populated — Mercer Island, Bainbridge Island, Renton, Lynnwood, Edmonds, Vashon Island, Kirkland. Some day, rail transit will solve some of the isolation, but until that happens (if it does), embrace independence and build your own city.

My other proposed paradigm shift is to remember the Duwamish River. First would be to develop its riverbanks for affordable housing, startup businesses overlooking the water, parks and walkways and running paths and water taxis. While you’re redeveloping the river valley, put up some new bridges to ease the access problems for West Seattle and add romance (like Portland’s bridges over the Willamette or Vancouver’s over False Bay).

Also while you’re at it, bring into the urban mix the river valley burgs such as Georgetown and South Park. Some of these towns are ripe for affordable housing and full of cheap land. I’d even dust off talk about annexing White Center and Glendale to Seattle city limits, with West Seattle as the urban spine and downtown.

The Duwamish River is the vital waterway for the Duwamish Tribe that Chief Seattle led, and the valley where the first white settlers perched their cabins (even before the Denny Party of 1851). The once-long river system was diverted, converted and straightened into an industrial waterway.

Does that still make sense? Are we better off to reclaim the river valley and allow industrial and Port uses to find cheaper, more accessible land in Tacoma or elsewhere? The cleaning up of the Willamette River was the great civic crusade in Portland. Why not do the same here, in much the same spirit that we are reclaiming our central waterfront for an urban park?

I can already see the posters and the buttons. Free West Seattle! Free the Duwamish! Tame the West Seattle Freeway! Free Chief Seattle!

David Brewster
David Brewster, a founding member of Post Alley, has a long career in publishing, having founded Seattle Weekly, Sasquatch Books, and Crosscut.com. His civic ventures have been Town Hall Seattle and FolioSeattle.
Previous article
Coronavirus Fallout: The End Of Meetings (We Hope?)
Next article
Rebecca Solnit’s Book: Remaking Our Lives Amid Major Disasters