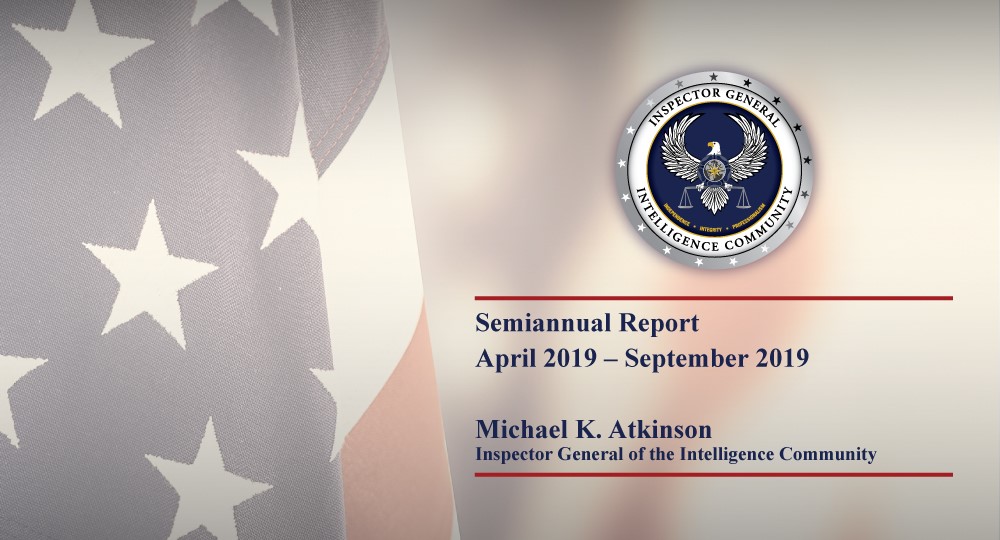 Donald Trump was elected president to disrupt our government and society — to drain the  swamp. The specifics were vague, but the understanding was that someone had to change the “system.” As Trump said at the 2016 Republican nominating convention in Cleveland, “Only I can fix it.” Topping that, he wants explicit loyalty to him from government employees as the means for doing these heroic feats.

While the coronavirus pandemic is ravaging our country, President Trump’s attention has shifted from deflecting responsibility for appropriately preparing for it to firing the institutional watchdogs that Congress had created to keep it informed of any department’s problems that could usurp Copngressional authority or endanger the public’s health.

A bipartisan Congress established a network of independent watchdogs over various federal departments when it enacted the Inspector General Act of 1978. In an era when, despite party affiliations, there was a common recognition that Congress needed to curb excessive presidential authority, the House passed it 388-6.

The law clearly states that Inspector Generals were created “to conduct and supervise audits and investigations” and “to provide a means for keeping … Congress fully and currently informed about problems and deficiencies relating to the administration of such programs and operations and the necessity for and progress of corrective action.”

Congress in the past has resisted presidents from interfering in the duties of IGs. President Obama’s administration attempted to do so when it issued a 2015 legal memo allowing departments to withhold some information from the IGs. Sen. Chuck Grassley (R-Iowa), then Chair of the Senate Judiciary Committee, amended the existing legislation  guarantying the IGs had access to “all records” of the agencies they oversaw. It was then signed into law by President Obama.

On April 3, 2020 Trump fired Michael Atkinson, the IG for the intelligence community. Atkinson handled the whistleblower complaint that eventually led to Trump’s impeachment. Atkinson said the firing was retaliation for doing his job. A bipartisan letter of eight senators led by Chuck Grassley was sent to President Trump followed the firing in less than a week. It accused Trump of not providing a sufficient explanation for firing Atkin and for apparently circumventing Congress’s authority by not providing a proper 30-day notice.

Trump did not break new ground here. President Obama in 2009 removed the IG for the Corporation for National and Community Service after that IG investigated an Obama supporter. Obama said he no longer had the “fullest” confidence in the IG. Trump said that he lost his “vital” confidence in his IG. Obama gave Congress a 30-day notice, as did Trump, but both of them put the IG on administrative leave, effectively removing him from his position prior to the completion of the statutorily required notice period.

Congress failed to fix this ability to bypass Congress’s authority back in 2009, by stripping out a key provision in the  House version of the Inspector General Reform Act of 2008.  The final bill became law, but it did not include the House’s “for cause” requirement for removing an IG for 9 specific reasons, such as Neglect of duty; Malfeasance; Knowing violation of a law, rule, or regulation; Gross waste of funds; or Abuse of authority.

So the wording for firing IGs remained simply that an “Inspector General may be removed from office by the President. The President shall communicate the reasons for any such removal to both Houses of Congress.” As a result, presidents have fired IGs because they just darn wished to. President Reagan in 1981 fired all the watchdogs nominated by his predecessor, President Carter, a Democrat. After a fierce backlash, he reversed some of those dismissals.

Clearly all presidents appoint “loyal” followers to key White House positions, so that they can speak and act freely in pursuing any policy they choose. Such loyalty is to be expected. But Trump differs from former presidents, in that he has expanded his expectation of loyalty to offices that in the past were considered to be more bound to government rules and regulations than personal loyalty to the president.

Loyalty has come down to executing Trump’s policy or instructions, regardless of what some musty, old rules may say. The assumption that federal employees should be personally loyal to him puts employees in an awkward position. Do they follow an allegiance to the nation’s constitution and law, as they swore an oath to do, or do they maintain the trust of the president by supporting his decisions if they run counter to the law?

Early in Trump’s first term, former Sen. Jeff Sessions found himself in that dilemma. Trump appointed him as Attorney General, after Sessions had been the first senator to endorse Trump’s candidacy. Sessions recused himself from his Department of Justice’s probe into whether Russia had interfered with the 2016 presidential election because a DOJ regulation forbid its officials from investigating campaigns of which they were a part. Session was a Trump campaign surrogate throughout the race and served as chairman of the campaign’s national security advisory board.

In retaliation, Trump said he never would have hired Sessions if he knew he was going to recuse himself, despite Trump knowing that if Sessions headed the investigation it would have violated that Department’s rules. Session defended his decision saying that it was necessary in order for the DOJ “to do its work in a fair and impartial manner according to the law and Constitution.” Trump was outraged and eventually removed Sessions. Loyalty was more important than the law.

Trump has fired a number of professional employees who have served under prior presidents and who he considered disloyal for carrying out their legal duties.

FBI Director James Comey had served in the administrations of George W. Bush and Barack Obama and was overseeing the Russia probe. Comey claimed that in a personal meeting with Trump in the Oval Office, he was asked to end the investigation into Trump’s former national security adviser, Michael T. Flynn, who was later found guilty and sent to prison. Two months after Sessions’ recusal Comey was fired.

Ukraine Ambassador Marie Yovanovitch was appointed as an ambassador three times, twice by a Republican President, and once by a Democrat. She was abruptly told to come back to Washington from Ukraine “on the next plane.”

The Deputy Secretary of State informed her that the President had lost confidence in her and the Department had been under pressure from the President to remove her, although he told her that she had done nothing wrong. Her office’s anti-corruption efforts raised concerns with Ukrainians who “played by the old, corrupt rules sought to remove me,” Ms. Yovanovitch said. Trump’s personal attorney, Rudy Giulani was representing the interests of some of these individuals. She was subsequently dismissed as the Ambassador to Ukraine before her term was over.

Lt. Col. Alexander Vindman, a director for European Affairs at the National Security Council, testified before the Trump impeachment inquiry because he had raised concerns that a phone call between Trump and Ukrainian President Volodymyr Zelensky threatened US national security.

Afterwards, Trump called him “insubordinate,” and said Vindman had reported his “’perfect’ calls incorrectly.” The Army said they would not investigate him for disciplinary action, despite Trump recommending that they do so, because Vindman told  “horrible things” to the House investigators. Two days after Trump’s acquittal, Vindman was fired and escorted out of his White House office.

Most recently Trump has begun focusing on IGs who might balk at carrying his political message on the coronavirus pandemic rather than just reporting factually on it. He attacked Health and Human Services Inspector General Christi Grimm, after she released a report describing widespread testing delays and supply issues at the nation’s hospitals. In his tweet, Trump dismissed it as “Another Fake Dossier!” He mentioned that she served under the Obama administration, but did not note that she had also previously served under the Bush administration.

More significantly, Trump removed Glenn Fine as the coronavirus relief watchdog. Fine had just been named by the Council of the Inspectors General on Integrity and Efficiency to lead the Pandemic Response Accountability Committee, because he was the acting Pentagon IG.

Since Trump did not have a say in that decision, he could not be assured that Fine would loyally publicize Trump’s role in fighting the pandemic. So, while Congress was out of town, Trump named a new acting official to Fine’s position, who automatically became the new watchdog of federal government’s efforts to fight the pandemic.

The president has the right to replace certain government employees, but they have constraints when those positions protect the public’s interests. Trump’s dismissal of ambassadors, justice department and investigation department directors, and IGs has revealed a pattern of firing those who do not follow his policies as opposed to following the law that frames their responsibilities.

To avoid having these critical positions becoming fixated on being loyal to a particular president’s political agenda rather than having an allegiance to the constitution, Congress needs to pass new legislation. It should reintroduce the 2009 legislation requiring a president to only fire an IG for specific cause. In addition, they must not allow an IG to be suspended or put on administrative leave in order to circumvent Congress publicly reviewing his reasons for dismissing an IG before that person vacates the position. Unless Congress acts accordingly, government agencies will fall under the sway of a president who cuts off public scrutiny of mismanaged or corrupt agencies.

Any candidate for president could endorse such legislation and pledge to get it passed during their first year. Nevertheless, regardless of who becomes president in 2021, Congress must recognize that they are the government branch that must check any president, Republican or Democrat, from corralling too much authority that could endanger the public’s safety and liberties.