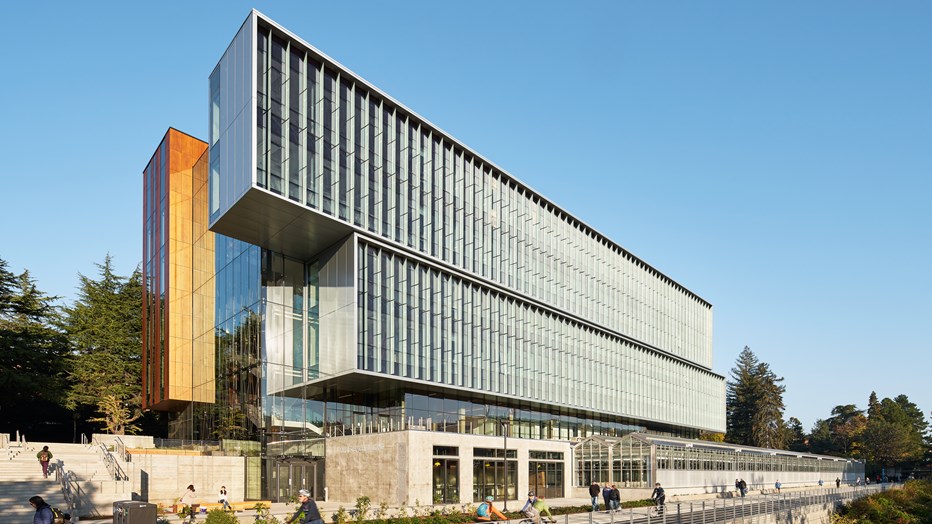 A Building That Is What It Does: UW’s New Life Sciences Center

Good luck finding the new UW Life Sciences Building, though it’s well worth discovering. It’s hidden behind a row of mature evergreens along the interior circle road in the southwest quadrant of the main campus. But the building might be the best possible introduction to new science infrastructure in Seattle.

To see the true scale of this six-story structure, go around it downslope to the south side, where cars cannot go, and look back.  It’s huge—as if three or four skinny downtown towers were stacked on their sides. A companion greenhouse structure stretches along the base, next to a long section of the Burke Gilman Trail where bicycle traffic is heavy, even in freezing weather. You might want to walk over the pedestrian bridge that leads across Northeast Pacific Street to the UW’s medical campus and look back at the rapidly redeveloping southwest quadrant.

It’s a tight fit. The new building packs as many square feet as it can into the six-story height limits set by the UW and fills a thin strip of land between Stevens Way and the Burke Gilman Trail. The old railroad trail connects it to UW Link Light Rail station.

In fact, the polished aggregate floors and large art works in corridors and elevator areas of the Life Sciences Building may remind you of SeaTac airport, at the far end of the light rail system. That corporate look makes this place, where a new generation of biology students is preparing to enter the workforce, seem like part of a new workday world. So it’s no coincidence that the large national architecture firm, Perkins + Will, has also designed some recent downtown towers and three UW research facilities in South Lake Union.

The UW campus is emptier these days, but this sector is a hive of scientific research in areas like vaccines, epidemiology, genetics, and epigenetics. The Life Sciences Building itself houses 40 principal investigators plus students, who use it as if it were any institution or high-tech building.  There are no classrooms, only informal lounges with whiteboard walls. Seated at moveable tables and chairs, young adults talk quietly and study like they’re in a library. Teachers reserve these same rooms for classes.

Upstairs there are open gathering spaces next to the stairs. Project teams convene and re-form and move from desk to lab bench to meeting space, all on the same floor. They drop their backpacks and hang their coats and set their cups on tables. The clutter is in the open. This spatial arrangement works a lot better than it did back in adjacent Kincaid Hall, according to David Perkel, who heads the UW biology department.

Multiple refrigerators and shelves of specimen bags, for instance, serve a group that’s mapping ancient grasslands with fossil pollens. When one of their appliances breaks down, someone right there is likely to fix it, instead of waiting for an owner who is on another floor. The new Life Sciences Building works hard—for the campus, the network of users, and the department, according to Perkel.

In the top floors, the Life Sciences Building is still being built out as private funding is sought. In the lower floors, modular spaces make it easy to settle into new teams for new projects.   Much of the middle is taken up with laboratory bench space. Users circulate between this inner core with its controlled environments and the corridors along the south side, just outside the lab window walls. Offices and small seating areas line up along the south wall.

On the north side of the core labs is a long, wide hallway a little like a hospital corridor, except the outer wall is lined with enough refrigerators and incubators to make an ordinary architect cringe. The design team has understood that equipment will evolve far faster than a building should age. The finishes are tough and the electrical supply and ventilation systems are generous and adaptable. Along the north wall are a number of workspaces and dark rooms where light must be controlled. Some have views of the close-by evergreen canopy.

It doesn’t get any greener than this building. Institutions like the UW and other big users of power are reliable investors in sustainable construction.  Arrays of glass fins extending from the south walls of the new building are photovoltaic panels. Surplus water is diverted from the green roof to irrigate greenhouse plants. The energy burned with heavy use of refrigerators and all manner of controlled environments inside the facility is partially offset by the latest systems for absorbing and recycling heat. The UW has announced a design award and a LEED Gold designation.

But is it good? Yes, very. Form follows function. The UW is joining the larger corporate and scientific world, and the Life Sciences Building is what it does. It makes knowledge workers happy and productive.

Its functional excellence looks good in contrast with its neighbor on the corner of campus, the stand-alone Physics and Astronomy Building and planetarium (Cesar Pelli, 1994). I don’t like the Pelli buiding’s fake brick structure and textbook allusions to historic architecture. Compared to the rational purity of the Life Sciences Building, it’s unnecessary at best. And yet, I hope there’s still room on the campus (and in the budget) for bold experimentation in architecture—without nostalgia. Institutions of higher learning can be good patrons of design. But it involves risk and money. Who’s the artist? And who’s going to pay? We seem to be out of answers, for now.

Instead, safety is first and art is a distant second. Climate change and pandemics threaten us all. New public places like the Life Sciences Building have become background environments where smaller works can be commissioned and installed. At the same time, flexibility in use means the building can adapt to change and keep on working hard. In these times, that’s what we need.

Clair Enlow
Clair Enlow is a freelance journalist writing about architecture, planning and history. She’s a Loeb Fellow and an honorary member of AIASeattle.
Previous article
Italian Diary: Inside The CoronaZone Lockdown
Next article
Dying… In Perspective…