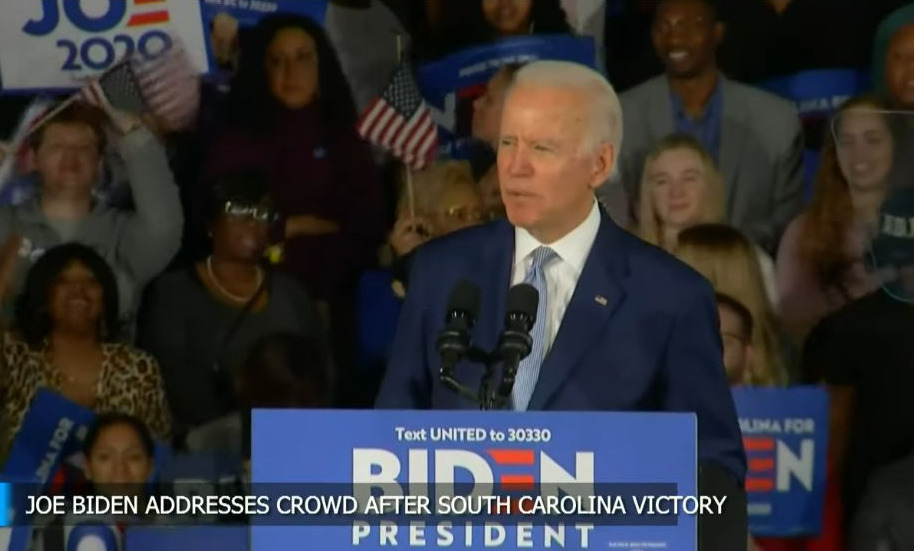 Did the Real Joe Biden Just Stand Up?

Joe Biden had a great day on Saturday — and an even better night.

It wasn’t just that he registered a landslide victory in the South Carolina primary, winning African-American voters overwhelmingly, and (at least for the moment) halting what was beginning to appear like Bernie Sanders’ inevitable march to the Democratic nomination. Perhaps more important, it appeared that he finally found a compelling way to explain why his rejection of partisan polarization and anger is the true way to build the progressive change that Democratic voters crave.

Biden’s short 13 minute victory speech Saturday night in Charleston was not just good. It was great. Biden was forceful. He was confident. He avoided for the most part the verbal tics and trips and stumbles — the remains of a serious stutter he overcame as a child — that have plagued him on multiple debate stages. But it wasn’t just how he said it that was better. It was what he said.

In his speech, Biden delivered what a savvy political consultant friend of mine insightfully described as “the moral case for traditional American liberalism, and for a politics that’s measured by actual moral progress instead of smug position-staking.” It harkened back to the tone and the rhetoric of Barack Obama and his administration, and yet the emotional flow and cadence of Biden’s speech were deeply personal and uniquely his own.

In the early part of the speech Biden delivered the obligatory thank yous, to the voters, and Jim Clyburn. And he drew a forceful contrast with Bernie Sanders (though he did not utter Sanders’ name); “We have the option of winning big, or losing big. That’s the choice… most Americans don’t want the promise of ‘revolution,’ they want results.”

But then, about halfway through the speech, Biden’s tone shifted, and became confessional. The heart of Biden’s speech – the most powerful part – was really a narrative of Christian forgiveness and redemption, one that was touched on universal human themes that were powerful and compelling even to a staunch secularist like myself. Biden said that this election was not really about intra-party disputes; rather it “is a battle for the soul of America,” a quest to heal the spirit of a country broken by the meanness, selfishness and divisiveness of Trump. He added, “Winning means uniting America, not sowing more division and anger. It means not only fighting, but healing the country. We have to beat Donald Trump and the Republican Party but here’s the deal: we can’t become like them.”

This was the point where Biden’s rhetoric soared to new heights, even as his voice softened, where he made the argument that true political victory is really about how the hard personal work of listening to our better angels, about the difficult struggle to find our common humanity, is the true pathway to progress.

Biden told the story of the white supremacist church shooting, and says it was because the surviving victims forgave the shooter that change, and progress on racial harmony, happened in South Carolina. The Confederate flag was removed from the state Capitol.

Biden then proposed that as the exemplar of how you really create change, which is about bringing people together, Uniting them rather than driving them apart. And he movingly equated the emotional pain of those survivors, and his own pain over the loss of his son, with the pain on the nation.

The contrast he was drew was really on two fronts: first the contrast with Trump’s meanness and lack of empathy and the destruction that has caused, but also he was drawing a clear contrast with the angry, chimerical promise of “revolution,” an indulgent fantasy of a total partisan victory that was also corrupting the nation’s soul. When he called Bernie’s revolution “false promises,” the religious subtext was hard to miss.

It was strong and heady stuff, a clear indication that Biden has finally found his voice, just when it may be too late to make a difference. .

Sandeep Kaushik
Sandeep Kaushik is a political and public affairs consultant in Seattle. In a previous life, he was a staff writer and political columnist at the Stranger, and did a stint as a Washington State correspondent for Time Magazine and for the Boston Globe, back in the olden days when such positions still existed.
Previous article
Report From The Front: Life In Italy During The Coronavirus [UPDATED 3.3.20]
Next article
Bill Gates, on What to Do About the Coronavirus Threat