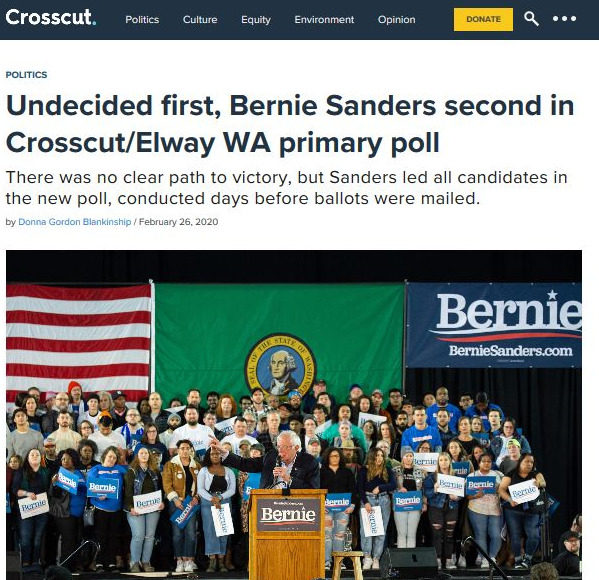 Crosscut’s Elway Poll for the Democratic presidential nomination is just out, and can be compared with an earlier (Jan 31) KING-5 poll to give some indication of how this state’s March 10 primary might turn out. These polls need to be taken with shakers-full of salt, since the Super Tuesday results will have a big impact, and some candidates might drop out before the Evergreen State votes.

Among the trends: Small rise for Bloomberg (pre-debate); droop for Warren (for whom this state is a natural, and where she has spent significant time campaigning); big rise for Klobuchar; big fade for Biden. Sanders continues to lead, though losing ground and stuck in the 20s (low ceiling?). Lots of late-deciders. And, notes the Crosscut story, Only 63% of people who voted for Sanders in 2016 are still with the candidate this time around. “That is surprisingly low,” [pollster] Elway said.

David Brewster
David Brewster, a founding member of Post Alley, has a long career in publishing, having founded Seattle Weekly, Sasquatch Books, and Crosscut.com. His civic ventures have been Town Hall Seattle and FolioSeattle.
Previous article
Back To The Future: What’s The Holdup On A Lake Washington Passenger Ferry?
Next article
What would a real pandemic change? Everything.