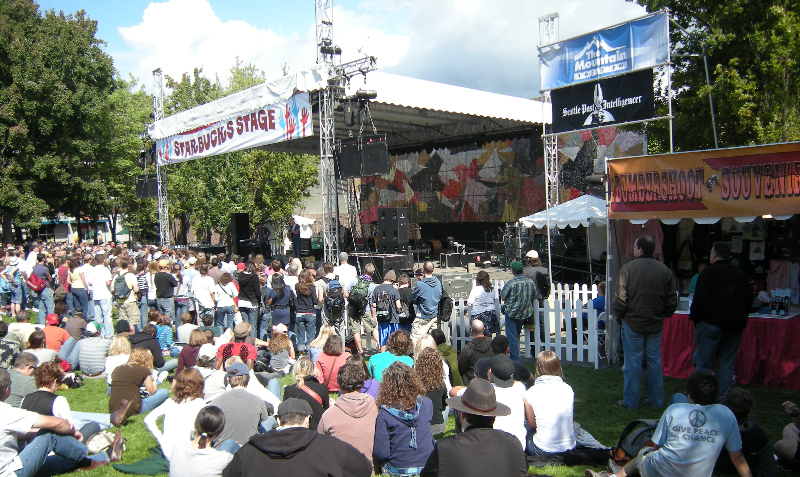 Last fall AEG, the giant entertainment event producer, told the City of Seattle it was not going to renew its contract to run Bumbershoot, the iconic Seattle Labor Day festival. Once the tent poliest of tent pole events in the region (attracting 325,000 in 1974 at its height), over the past 20 years Bumbershoot declined creatively, lost its distinctiveness and priced itself out of being a community event. To be fair, changes in the music industry made the business significantly more challenging, but until recently, the past ten years have been a kind of Golden Age for festivals. AEG, despite heroic attempts to make the business model work given considerable constraints, decided to pull out.

Now, after reappraising the situation, the City has decided to continue Bumbershoot, returning the contract to run the festival to One Reel, another Seattle icon. The non-profit One Reel is a legendary presence in the Northwest. Under founding director Norm Langill, it ran Bumbershoot for decades. It also produced the Goodwill Arts Festival attached to the Goodwill Games in 1990, the Gasworks Fourth of July fireworks, the Summer Nights at the Pier concert series on the waterfront, and Peter Gabriel’s WOMAD (World of Music and Dance) USA festival in Redmond. Langill eventually created TeatroZinzanni cabaret about 20 years ago, which set up next to Seattle Center before moving to Marymoor Park.

At its height, One Reel had 50+ employees, hiring 1000 more for events like Bumbershoot. But One Reel has been a quieter, more modest presence in recent years, and according to its website – despite an impressive list of “task force contributors” and advisors – its main activity lately seems to have been the Pianos in the Park program.

Nonetheless, it’s hard to get more local than One Reel, its artistic and creative pedigree is unsurpassed here, and even the company slogan “Our stage is Seattle” is encouraging. It’s an open question whether One Reel still has the creative juice and production resources to reinvent Bumbershoot, but the City seems to have made the logical bet.

One Reel executive director Marty Griswold told Crosscut this week that the plan is to come back with a scaled down festival this year and come back strong for the 50th anniversary in 2021. “Our goal this year is to return to our core values of inclusiveness, community engagement and the ‘specialness’ that has always been part of what makes Bumbershoot feel different than other festivals,” he said.

Sounds about right. On the other hand, here’s an opportunity to radically reinvent the whole thing – simply shrinking or trying to recreate an earlier version would be a mistake. Sure, build on the quirky fun spirit of the original, but our expectations for such events have significantly evolved. Seattle, with its tech sector, is one of the most creative cities in the world. Seattle’s 1962 World’s Fair had a wide definition of creativity; at the first Bumbershoot in 1971, a significant piece of a somewhat insignificant budget was spent on an improbable laser show that wowed the crowd and signaled ambitions. What’s the equivalent for the imagination today? Now it’s up to One Reel.

Douglas McLennanhttps://www.artsjournal.com
Doug is a longtime arts journalist, and the founder and editor of ArtsJournal.com, he's frequent keynoter on arts and digital issues, and works with a number of arts organizations nationally.
Previous article
Italian Towns Reclaim Their Beachfronts For The Public – Here’s How
Next article
Unrelenting Grays: Native Myths About Endless Rain