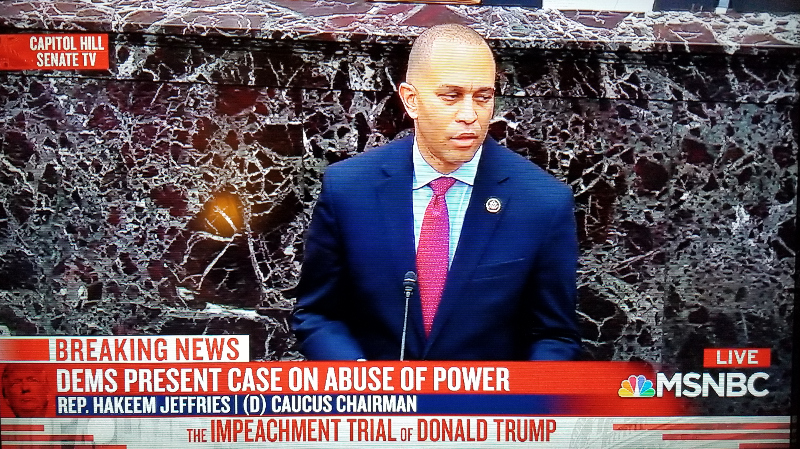 A very wise friend has counseled me that President Donald Trump will be defeated when he becomes a laughing stock for public debate, because the ultimate fear of a narcissist is to be made fun of.

We may have reached that point in Wednesday’s impeachment trial, thanks to the very skillful use of video technology by Rep. Adam Schiff and his team. My takeaway goes something like this:

Schiff used Trump himself to make his case, with brief video clips of the President inviting Russia and then China to help him investigate his political rivals, and also bragging about his power to withhold evidence from Congress.

Some of those videos were of the President as he prepared to board his helicopter, shouting at hapless reporters forced to resort to this demeaning manner of interacting with the President. After the second or third of these clips, the image of a very large man with a strange haircut and a somewhat-orange face, wearing a very large coat and a yard-long necktie and waving and shouting became, well, comical.

Where else would the Latin term “quid pro quo” wind up determining the fate of a president who possibly had to Google it before using it—over, and over, and over. “No quid pro quo” is the 2020 version of Richard Nixon’s “I am not a crook” of Nov. 17, 1973. For those of us who speak very little Latin, it is a welcome primer.

We were spared images of the same fellow hunched over his laptop sending out literally dozens of Tweets based on misinformation or lies from sources that most of us would reject as nut cases. Does he wear the same uniform when he tweets at 1 a.m.? Whose book will break that story?

But we did enjoy a very long narrative that resembled a routine from the old Abbott and Costello team of long-ago radio. That was the tag-team dialogue that went something like this:

Three Amigos: You must make an announcement of an investigation into the Bidens.

Zelensky aide: But we can’t make the announcement until we have a date for a White House meeting.

Zelensky aide: No, you go first.

Abbott and Costello play Alphonse and Gaston. After you. No, after you. Optional tap dancing.

The image of these three white guys: Rick Perry, Gordon Sondland, and Kurt Volker—in sombreros, perhaps with a mariachi band, propositioning a suspicious team of Ukrainian diplomats is delicious in itself. A remembrance of Desi Arnaz here?

Somewhere in the realm of humor must be the very weirdness of the president’s public appearance in the midst of what he claims is a laughable attempt to impeach. He shows up at Davos, the annual gathering of the real ruling class of the modern world, plus political leaders and hangers-on. While the group is pretending to place real actions on climate change over quarterly dividends, President Trump is selling American coal and oil and debunking the world’s leading scientists as doomsayers. With a straight face! Now, that’s comedy, albeit of the dark side.

Maybe Trump was just kidding at Davos; it’s an escape valve he often uses when caught in a particularly egregious insult or lie. The president was just kidding, his minions assure us. Well, if Trump has a sense of humor in any way, I’m the Prince of Sussex.

I don’t know if Schiff has a sense of humor, but he seems to have a sense of irony. Plenty of that to go around (read Lindsay Graham). My favorite impeachment manager (after Schiff) was Rep. Zoe Lofgren, 72, who is a player in her third presidential impeachment. Lofgren comes across as your favorite older aunt who is also sharp as a whip. I saw her repress a smile in her address to senators, and I saw that twinkle in her eye as she perhaps recalled a time when members of the Congress could address each other civilly and with respect and not be called out for it by their president.

And then there is Rudy Guiliani.  No, we won’t go there.

Is it sacrilege to examine impeachment as a theme for a stage show? Perhaps, but if they can make a musical out of Les Miserables, think of what could be done with Trump, Guiliani, and the Three Amigos; with Volodymyr Zelensky as Jean Valjean?

If we can’t get justice from this show, at least we could have a few laughs.

Floyd McKay
Floyd J. McKay, emeritus professor of journalism at Western Washington University, covered Pacific Northwest politics as a reporter and opinion writer for four decades, primarily in Oregon. He was commentator/news analyst at KGW-TV (King Broadcasting) from 1970 to 1987. Previously a print reporter, he returned to print and online reporting and commentary from 2004 to 2017 with the Seattle Times Op-ed page and Crosscut.com. He is the author of Reporting the Oregon Story: How Activists and Visionaries Transformed a State (Oregon State University Press, 2016). He lives in Bellingham.
Previous article
Humor: Tips on Buying Off Shakedown Artists on the Phone
Next article
Everyone Wanted To Be Silicon Valley – Now Silicon Valley Is Everywhere