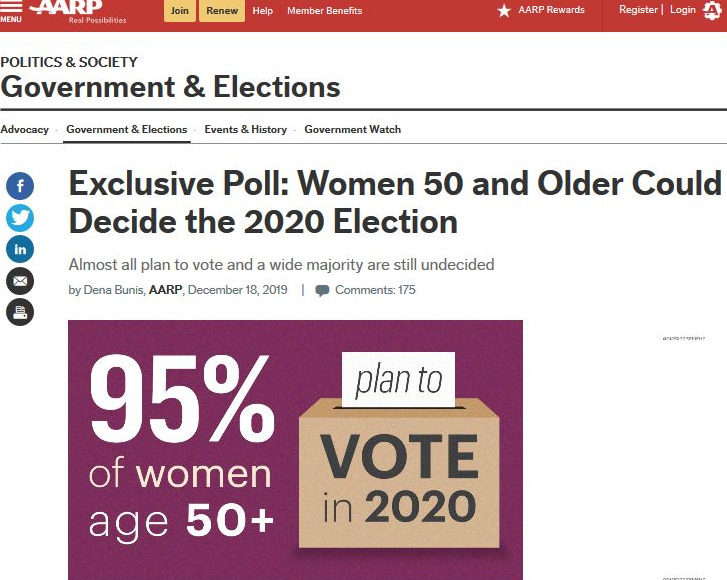 Will Older Women Pick the Next President?

Most presidential campaigns in the modern era have worked hard to gain the support of women voters, and so they should. I helped cover six campaigns when based in Washington, D.C., and each one always had a dedicated team focused on outreach to women. One cycle it was all about “soccer moms” and another it was “Walmart women.” In 2020, it could be all about “graying women.”

A new poll published by AARP found that women over 50 are poised to have a decisive voice in choosing our next president because 95 percent of them plan to vote. This is great news for those of us in the demographic.

Too often, women of a certain age feel invisible, marginalized, discounted. The New York Times obituary columns historically were a measure of this reality because rarely did they feature the deaths of prominent women. The paper acknowledged this sad oversight by launching a  project publishing the obituaries of women it had ignored at the time of their deaths, like Sylvia Plath and Ida B. Wells.

Sexism and ageism are difficult isms to disrupt, but demographics may be on our side. By 2060, the number of Americans 65 and older is projected to soar to 95 million or 23 percent of the total population, according to the Population Reference Bureau. And most of these senior citizens are likely to be female since women statistically live longer than men.

Look at our state. In Washington, the overall population is divided almost evenly between males and females as counted by the last Census. However, women start to outnumber men going into their 40s and 50s upward.

Statistics like these show why older women may find they are not invisible or discounted by presidential contenders in 2020. It also may help that Elizabeth Warren is one of them, and three other of the top five remaining candidates also are over 70.