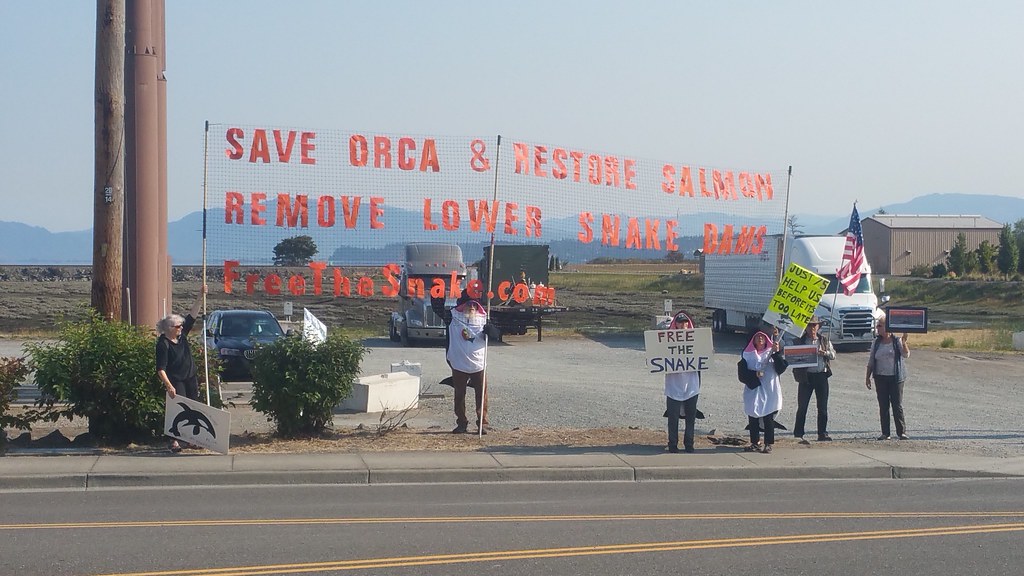 Another Study, Another Impasse on Breaching the Snake River Dams

Governor Jay Inslee’s Lower Snake River Dams Stakeholder Engagement Study landed on the Friday before Christmas not with a bang, as if someone in your neighborhood were trying out New Years fireworks. And not with a thump, as if Santa were practicing rooftop landings. Instead, it arrived with the barely discernible sound of discarded Christmas wrapping paper hitting the rug.

The usual array of vested interests, which had spent years expressing the usual array of opinions on breaching the lower Snake River dams – which impede passage of salmon to and from their Idaho spawning streams — had gotten together and summarized those opinions yet again.  Getting everyone talking together can’t be bad. The conservation group American Rivers says, “Governor Inslee’s report is a step toward the creative thinking and problem solving we need to do as a region to understand a path forward.”

That may be true; it certainly sounds optimistic.  There’s no way to cast the report as substantive progress, though. Or to see it as evidence of gubernatorial leadership.

In 2018, after the orca dubbed Tahlequah made international news by swimming around Puget Sound with her dead calf for 17 days, Inslee convened an Orca Task Force in which representatives of the same interest groups came up with consensus recommendations for saving Puget Sound orcas.  It wasn’t hard to agree on, say, enforcing laws already on the books. (That was actually a recommendation.)

Some salmon advocates hoped the group would go a bit farther and recommend breaching dams.  Some scientists have argued that because Snake River chinook are historically an important seasonal part of the orcas’ diet off the Washington coast, the Northwest orcas can’t make it unless those dams are breached. Agricultural and barging interests that rely on – in other words are subsidized by – the dams have argued otherwise, as has the Bonneville Power Administration.

The salmon advocates were disappointed by the Orca Task Force report.  There was no recommendation to breach or even consider breaching the dams. (Breaching would be a federal decision, but one that could be influenced by state preferences. So far, Washington politicians have not gotten behind it.)   Instead, the task force recommended convening a bunch of “stakeholders” — i.e., vested interests –- to think about ways to ease the economic transition if the dams were breached.  But the “stakeholders,” as noted, just summarized their own old arguments.

A more substantive and potentially more significant document appeared the same day: The 9th Circuit Court of Appeals ruled that the Environmental Protection Agency (EPA) must come up with temperature standards for the Columbia River and its largest tributary, the Snake.  The court noted that water temperatures had periodically exceeded 68 degrees Fahrenheit – a dangerous level for salmon – for years. The states of Washington and Oregon should have devised “Total Maximum Daily Loads” (TMDLs) for  water temperature decades ago, but the states had punted to the EPA. By not creating TMDL, the EPA has violated the federal Clean Water Act.

How could the federal government lower water temperatures in a major river?  Funny you should ask. That question leads back to those same Snake River dams.  This past October, a group of 55 scientists signed a letter to Gov. Inslee and other Northwest political leaders arguing that the only plausible way of lowering water temperatures in the Snake and even the mainstem Columbia was to breach those dams.

The Snake carries a lot of water – it is the Columbia’s largest tributary – and a lot of that water originates high up in the mountains of Idaho. If it rushed unimpeded into the Columbia, it could actually lower the temperature of the larger river.  But trapped in a series of reservoirs, it warms up too much to do the job. Get rid of the dams, and the fish would have not only fewer obstacles but cooler water.

Will Trump’s EPA or the other federal agencies due to issue a new EIS for operation of the federal Columbia River dam system in 2020 raise the subject of breaching?  Of course not. At best, the 9th Circuit ruling will probably just form the basis of more litigation.  The Lower Snake River Dams Stakeholder Engagement Study isn’t apt to change that.