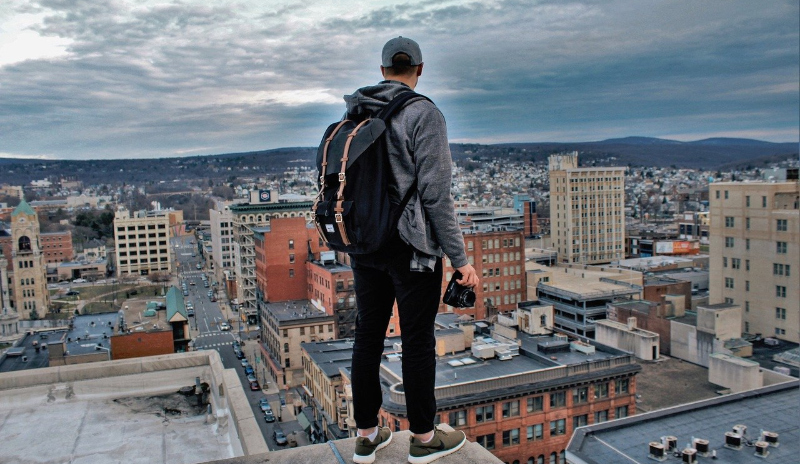 If you sense that the Seattle area is getting more Bro-ish by the day, you are right. And not just in Seattle, but throughout King County. The Millennials are, indeed, taking over, and fast—just as their parents did a generation ago.

The pattern of age distribution in the Seattle area reflects the pattern of in-migration. Migration into King County is heavily from other states and foreign countries, and migration over long distances leans largely toward young adults. Nearly 50 percent of migrants to King County are between 20 and 35 years old (Millennials) and only 8 percent are between 55 and 75 (Boomers).

We can see all this unfold through population pyramids, a favorite tool demographers use to illustrate the distribution of population across age groups and gender. Figure 1 shows the population pyramid for the entire United States in 2018. By convention, males are on the left, females on the right. Each bar represents the number of people in that age group.

The remnants of the Baby Boom shows up as a slight bulge in the 55 to 59 age group, but mortality and large scale immigration of post-boomer aged people has diluted that bulge considerably. The Millennials show up as the bulge in three bars between 20 and 34. The smaller Gen-X cohort is seen in the shorter bar between 40 and 44, and their smaller cohort of children is toward the bottom.

Figure 2 shows the pyramid for King County in 2018. Totally different shape. The Boomers near the top are shrinking away, while the Millennials have bulged way out, especially in the two bars between 25 and 34. Now, the Seattle area has always been different than the country as a whole, since it attracts large numbers of in-migrants, and in-migrants tend to be young adults. And older cohorts diminish more rapidly in places like Seattle as retirees move to warmer places. So, some difference from the national picture is expected.

The 2018 pattern is a more extreme version of the past. Figure 3 shows the pyramid from 1990, when Boeing was decidedly middle aged and young talent was just starting to arrive in large numbers to Microsoft. Newsweek magazine had a cover story titled “Everyone is Moving to Seattle.” The Baby Boom bulge is quite pronounced, and since the younger boomers were still in prime age for migration, that bulge was expanding. Millennials were about two-thirds of the way onto the planet. The older, “Greatest” generation was quite a bit smaller.

Figure 4 shows the pyramid for 2000, after the go-go decade of the 1990s. The Boomers continue to dominate the picture, and the Millennial cohort is still quite a bit smaller. Gen-X is in prime migration age at this point and beginning to fill in the post-Boomer bars in the 25 to 35 range.

What happens between 2010 and 2018 is quite dramatic. Figure 6 compares the shapes of the 2010 and 2018 pyramids. In just eight years, the young adult bars shoot out. The Boomer bars would have advanced up the pyramid to about two spaces, so they shrink quite a bit.

How big were the shifts? Figure 7 shows the population change, in numbers of people, by age group (both genders) in just five years. (This chart uses the more accurate 5-year average data from the American Community Survey, so it understates the most recent changes.) The chart shows the growth of each cohort from 2012 to 2017, with total population growth shown on the far right.

Although the Millennial growth is exaggerated, this general pattern is explainable through the normal shifts in population. People migrate mostly when they are young adults, and migrants to an expensive region like Seattle usually have a job before they arrive. The rapid hiring by Amazon explains a good deal of the Millennial bulge. At the other end of the age spectrum, few older people migrate to a place like King County, and some older people will migrate out to warmer, quieter, less expensive places. And within the older groups, death begins to take a toll. About two thirds of the decline in the Boomer groups can be attributed to deaths, and one third to out-migration.

So, yes, the Millennials are really taking over and we should not be surprised. But two questions remain. First, will they stay? Recent research on migration suggests that people with few ties to an area often leave to go back to their hometowns. So we can expect some of these in-migrants to turn into out-migrants in a few years. On the other hand, Seattle has always been a “sticky” place where people “come for the job, stay for the lifestyle.”

Second, among the Millennials who stay in the region (having been born here or moving here), will they have their own children in large numbers? There is no evidence to suggest that Millennials are any less fertile than previous generations. And, contrary to some expectations, there is no evidence that they want to raise Generation Alpha in urban apartments, so we can expect further pressures on the region’s limited supply of single family homes.

Michael Luis
Michael Luis is a public policy consultant who has been wrestling with housing, growth and economic development issues around Washington State for over 30 years. He is author of several books on local history and served as mayor of Medina.
Previous article
Indexer: Taking Over – Millennials Everywhere?
Next article
Impeaching Trump: Is That All There Is?