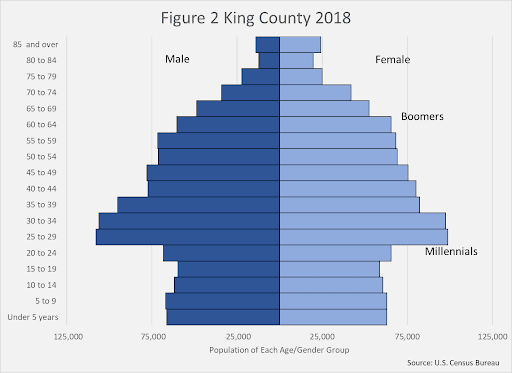 The Millennial generation, born between about 1979 and 1995, is the largest age cohort in U.S. history. Millennials are the children of the Baby Boom, and with birth rates in the 1980s of just over two births per female, this group was bound to be slightly larger than its predecessors. But immigration, both legal and illegal, picked up in the 1980s, bringing waves of young adults to the U.S., ready to start their own families.

Figure 1 shows the population pyramid for the U.S. in 2018, with the Millennial generation between the red lines. Those slightly longer lines do not look so intimidating at a national level. But population is fluid, and Millennials are now in the period of life with the highest propensity to move long distances. In 2017, about 3 percent of American’s moved from one state to another or from overseas, but 5.5 percent of people between 20 and 35 years old made such a move. Looked at another way, 40 percent of the people who moved from abroad or to another state were in that age range.

None of that moving around will show up in the population pyramid for the U.S., of course. But it will show up in pyramids constructed for individual areas. Figure 2 shows the population pyramid for King County in 2018. Now we see the impact of migrating Millennials. The bars for the ages 25 through 39 are quite long, indicating quite a bit of in-migration in recent years.

We can contrast this with a region that has struggled economically and has difficulty attracting young people. Figure 3 shows the pyramid for St. Louis County, Missouri. Here we see the Baby Boom generation still the largest of the cohorts, with the longest bars on the chart in the 60 to 64 age range. The Millennial bars at 25 to 29 are slightly longer, but proportionally shorter than the national picture seen in Figure 1.

The presence of Millennials is even more exaggerated in San Francisco than in Seattle. And, as is well known, the presence of children under 18 is very low in San Francisco. Multnomah County shows a pattern similar to that of King County, but with not the same size bulge in the Millennial cohort. Although Portland is certainly not “the place young people go to retire,” as described by Portlandia, it does not have the technology jobs magnets that San Francisco and Seattle have that draw in large numbers of well-educated Millennials.

Social scientists have noted that rates of migration within the U.S. have fallen steadily for the past 50 years, and there is no generally agreed upon reason for this. But in the case of the dynamic West Coast cities, attracting young people from around the country does not seem to be a problem. Whether they choose to stay and build their lives in these cities is another question, and is tied closely to the price of housing and the lengths of commutes.

Michael Luis
Michael Luis is a public policy consultant who has been wrestling with housing, growth and economic development issues around Washington State for over 30 years. He is author of several books on local history and served as mayor of Medina.
Previous article
The Impeachment Of Donald J Trump: Our Story So Far
Next article
Indexer: King County Migration – Why We’re Getting More Millennial