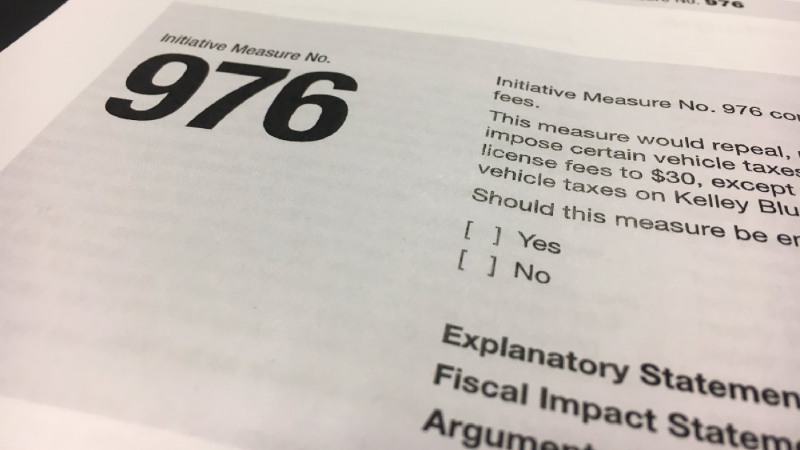 I-976 Trust Issues: Opening For A Governor Eyman?

Let’s put aside for the moment whether voters were right or wrong to approve Tim Eyman’s initiative 976. Or whether it’s unfair that voters in Eastern Washington tipped the balance to pass a measure that was important for funding transportation projects in King County (Danny Westneat makes an excellent case that King County contributes more to the rest of the state than we get back).

But the fact is 976 passed and did so easily despite apocalyptic warnings about the consequences if it did. Now cities and counties are suing to nullify the initiative saying that it is a “poorly drafted hodgepodge that violates multiple provisions of the Constitution.” And Sound Transit says it will ignore initiative results and continue to collect the fees. Officials are protesting that voters didn’t understand what would happen to projects and budgets.

In the I-976 filing, Ferguson’s office points to Seattle’s rapidly growing transportation budget, public benefits coming from the Washington State Convention Center expansion and the recent sale of the Mercer Mega Block for more than $140 million to argue Seattle can withstand I-976.

Voters were well aware of the funding cuts that would result from slashing car-tab taxes, the Attorney General’s office counters, and voted for the tax cut anyway.

“[Plaintiffs’] alleged ‘harm’ must be seen for what it is: a policy disagreement with the Washington electorate,” the filing says.

That’s stark. Part of what fueled anger at the Sound Transit car tab fees was a perceived unfairness in the way the state was calculating car values and assessing the tax. If you say you’re taxing on the basis of a car’s value and then don’t use the commonly accepted standard for establishing that value, voters doubt its fairness.

Now, after hearing from voters, officials are risking further distrust by ignoring them – even if it’s only while appeals go on – thereby putting in jeopardy future tax asks, no matter how justified. A friend renewing her car tabs this week reported that the clerk at the renewal office thanked her for being so polite. The clerk said motorist after motorist had heaped abuse over their unhappiness that the measure hadn’t yet been implemented. Again, my argument isn’t about the rightness or wrongness of the vote, but about the damage of losing the trust of voters. Already, the much-loathed Tim Eyman has announced he’s running for governor. Surely he won’t win, but the tone deafness of ignoring voters has been rocket fuel for many a demagogue. Why give him this?

Two last points: If the initiative as written really is unconstitutional, it was a mistake to allow it to get to the ballot. Politically, the time to challenge it was before it went to voters. Now, even if it was illegal, there will be a perception that voters’ will was nullified on a technicality and that officials still aren’t listening. Woe be to the next tax voters are asked for, even here in generous King County.

Second – even if 976 is illegal, voters clearly rejected this way of taxing them. The longer lawmakers don’t address the fundamental issue of equitable tax reform (we have one of the most regressive tax systems in the country), the more difficult it’s going to be to solve the problems we have and fund the level of services we need.

Douglas McLennanhttps://www.artsjournal.com
Doug is a longtime arts journalist, and the founder and editor of ArtsJournal.com, he's frequent keynoter on arts and digital issues, and works with a number of arts organizations nationally.
Previous article
Housing the Homeless: Keep it Simple
Next article
Satire: Trump Shoots Three on NYC Street; GOP Apologists Fire Right Back