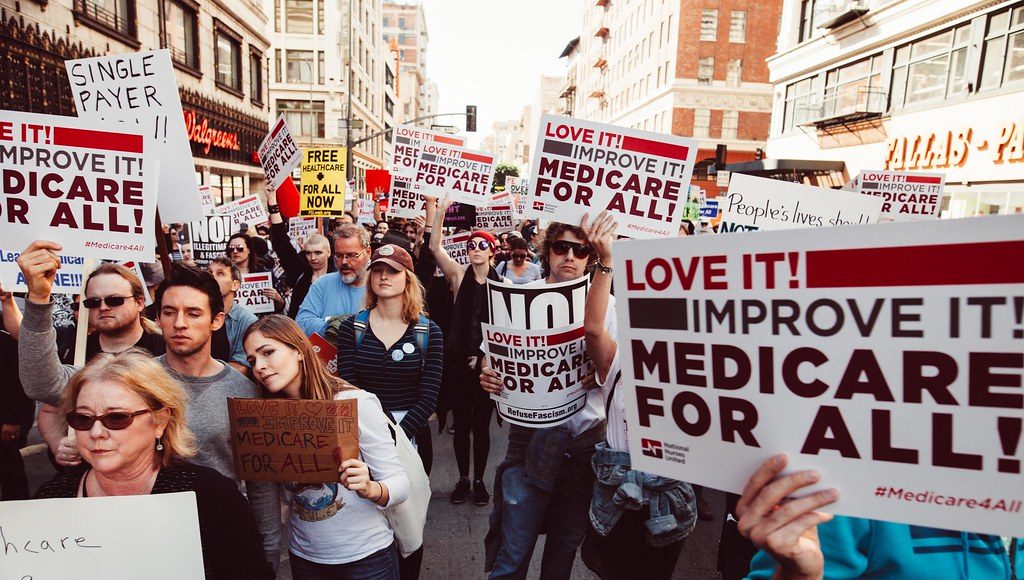 A Better (And Fairer) Way To Fund Medicare For All.

Most of the hyperventilating in the media about the supposed horrible cost of Medicare for All makes it sound like Senator Elizabeth Warren’s ten-year $34 trillion cost (some estimates are lower) would be a brand new tax sucking personal and public finances dry. Let’s clear this up, and then I’d like to suggest a better, more equitable approach to single-payer plans.

There are caveats, of course, in the explanations Warren has produced, but the main point doesn’t really get enough play: most—if not all – of this money already exists. It’s the money we already spend on health care at about 19 percent of Gross Domestic Product (GDP), almost $4 trillion every year.

So we’re in the ballpark, maybe already over the top of what Warren’s plan would cost. We’re also in a political campaign so the arguments (supported by one think-tank or academic study or another) will continue, with opponents (Republicans and the entire medical-industry complex) focusing on the scary figures. No change is their preferred option.

Nevertheless, the main issue remains:  how do we take the $4 trillion we’re already spending on health care and use it more efficiently? Simplifying the system – and increasing its fairness — is the attraction of single-payer or Medicare-for-All. Eliminating private health insurance premiums and the profit built into them is another attraction.

This is a high-stakes debate for all Americans because everyone is, justifiably, worried about family budgets and whether the insurance they have will cover sudden large medical bills and whether it’s sufficient to keep them from bankruptcy if the worst happens. It’s an even more serious worry for the 87 million people under- or uninsured.

Now I’d like to add to this debate by suggesting a strategy that would help any future efforts to move toward a “government option” short of – or on the way to – Medicare-for-All.

Currently, the Warren Medicare-for-All proposal calls for the monies paid by employers for employee health to be transferred to the federal government, the single payer for health care. That’s a huge chunk of the money – around $1 trillion – we’re already spending. But it’s the wrong method for moving the money. Here’s a better way:

What employers now pay for their workers’ health insurance should be paid NOT to the government but to the workers as a raise – both the portion already taken out of employee paychecks and the company’s share. The average employer cost for health plans is almost $20,000 per year per worker for family coverage and nearly $6,000 of that is deducted from pay. Coverage for single workers costs employers less, of course, as do weaker plans – less coverage, higher deductibles, higher co-pays. Single workers and those employed where the health insurance is simply not as good would get a smaller raise.  But they’d still get more take-home pay.

Yes, some of that money likely would go for Medicare-for-All premiums but how much would depend on what incomes would be taxed.  That’s a crucial decision in designing any future plan. I’d suggest no new Medicare tax on any family whose earnings fall below median income, with graduated premiums beginning somewhere above that.  Higher is better. And where that tax on ordinary folks cuts in would depend on what Medicare tax rates are set for high earners, and if the wealth taxes proposed to fund Medicare-for-All are indeed substantial. (Currently, there is a 2.9 percent tax on payrolls for Medicare – half paid by workers – that could be left in place without violating Sen. Warren’s “no new taxes on the middle class” pledge.)

Even families now paying for their own insurance – another $1 trillion  – would get the raise if their incomes fell under median or whatever higher level the plan could set. Their monthly premiums would disappear.

There would be a couple important benefits from this approach. First, workers at relatively low-pay companies with decent health insurance, even $15 per hour outfits like Amazon, and those trying to get there like Starbucks and Walmart, would get meaningful raises and actually keep the money if their families remained, as is likely for many, still below median income.

Second, this approach avoids a serious pitfall created if companies simply transferred their health insurance costs as cash to the government. Health benefits are a huge part of union contracts. Workers negotiated – and sometimes struck – to gain these benefits. Therefore, the money belongs to them – not the companies they work for – and should be paid to them as a raise when they sign up for the “government option” or Medicare-for-All. Even non-union workers are likely to feel the same ownership of their benefit packages.

Sens. Warren, Sanders, Congresswoman Pramila Jayapal and others should think about re-writing their plans to work this way. It would bring a lot of workers on board, and wash away worries about taxation for many by making it clear that below, say, median income or some other clear level, there would be no new Medicare tax.

Dick Lilly
Dick Lilly is a former Seattle Times reporter who covered local government from the neighborhoods to City Hall and Seattle Public Schools. He later served as a public information officer and planner for Seattle Public Utilities, with a stint in the mayor’s office as press secretary for Mayor Paul Schell. He has written on politics for Crosscut.com and the Seattle Times as well as Post Alley.
Previous article
Election: Lessons and Predictions from the Voters
Next article
Books: A Seattle Historian on How the West Rescued a Starving Russia