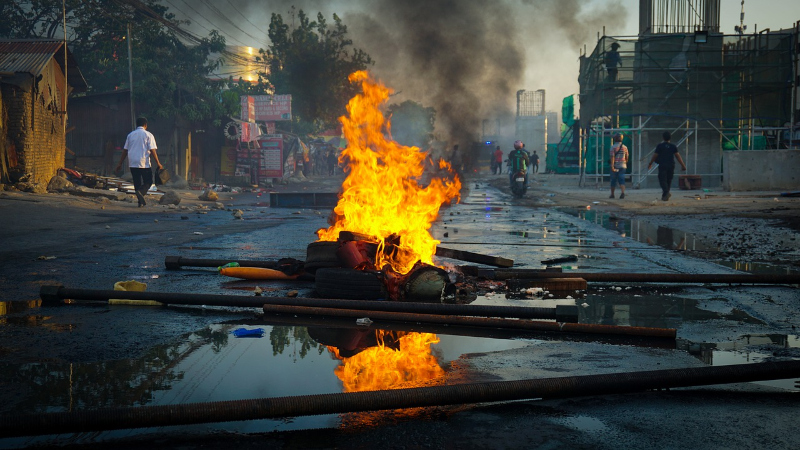 Breakdown: Why Corruption and Inequality Are Fueling a Global Wave of Anger

Rioting and protests are spreading around the world at a pace and intensity that threatens global economic stability and social peace.

Like the Occupy Wall Street rage earlier this decade and the contagion of discontent across the Middle East during the 2011 Arab Spring, millions of angry citizens from Hong Kong to Haiti are lashing out against a status quo of corruption, income inequality and governments more beholden to the wealthy than the working class.

The instigations for the wave of unrest vary from flashpoint to flashpoint. But the common tinder fueling the fires is social injustice, even in countries that only a few years ago threw out authoritarian regimes and seemed on promising paths toward democracy.

Another shared element will be the economic damage to the countries from disrupted business, blocked transit and property destruction. In the end, the venting is likely to make living conditions and social disparities worse, not better. The International Monetary Fund last week lowered its global growth forecast for 2019, citing the spreading instability as a cause, and economists now say Hong Kong has tumbled into recession with no end to the economic damage in sight.

A look at the epicenters of a global nervous breakdown:

Bolivia – Against the backdrop of an economy deteriorating due to falling oil prices and export demand, Bolivians took to the streets on Oct. 20 to accuse President Evo Morales of election fraud in his claim of victory in his bid for a fourth term. Rioters burned election offices and ballot boxes in major cities. Opposition supporters called a general strike on Monday, blocking roads and shuttering businesses in the capital.

Chile – In one of the most prosperous democracies in Latin America, the spark for a rebellion that brought a million people into the streets last week was a 4-cent rise in the price of a subway ride in the capital, Santiago. President Sebastian Pinera sacked his Cabinet and promised an end to the state of emergency that brought tanks into the streets, but the measures have failed to quell the turbulence. At least 20 people have been killed.

Ecuador – President Lenin Moreno announced an end to government fuel subsidies as part of a $1.3 billion package of austerity measures earlier this month, intended to pay down loans taken out by the previous administration for massive investment in urban infrastructure and universities. The payback plan angered indigenous farmers, who saw little benefit from the public spending binge during Ecuador’s oil-exporting heyday when prices topped $100 a barrel. Moreno cancelled the austerity package, quieting the revolt two weeks ago, but not before seven were killed, 1,000 injured and the government forced to temporarily relocate from Quito to Guayaquil.

France – Truck drivers angered by a rise in fuel prices blocked highways and rioted in the heart of Paris in October 2018 in protest of the price hike. A broad array of workers joined in opposition to government tax reforms they see as disproportionately hurting the working class. The protests have continued to roil France for a year, leaving at least 11 dead and 4,000 injured among the protesters and police.

Haiti – Months of protests against endemic corruption in the Americas’ poorest country have paralyzed transport and commerce. Unrest is intensified by economic fallout from the crisis in Venezuela, which had been supplying Haiti with subsidized fuel under the Petrocaribe trade community founded by late Socialist leader Hugo Chavez. Protesters accuse a succession of leaders in Port-au-Prince of embezzling billions from the fuel aid and vow to keep up their disruptions until President Jovenel Moise resigns.

Hong Kong – Five months of pro-democracy protests have challenged China’s authority over the former British colony, prompting the threat of a military crackdown from the mainland with echoes of the Tiananmen Square massacre of 1989. The autonomous territory’s leader, Carrie Lam, rescinded a law that proposed to allow extradition of criminal suspects from Hong Kong to Beijing’s jurisdiction – a move curbing the territory’s autonomy that sparked the protests. As with uprisings elsewhere, concession has failed to satisfy the masses.

Iraq – The latest wave of violence to grip Iraq’s main cities has taken at least 223 lives this month. Baghdad authorities announced a midnight-to-6 a.m. curfew beginning Monday but demonstrators demanding an end to government corruption and economic hardship said they would defy the order. The outbreak of discontent broke a two-year period of relative peace in the country after the ouster of Islamic State militants in 2017 from land seized for their proclaimed caliphate.

Lebanon – Protests that began in mid-October against a proposed tax on calls made through the messaging service WhatsApp have morphed into collective outrage against Beirut’s ruling elite. Tens of thousands from across sectarian communities formed a 105-mile human chain from the country’s northern border to the Mediterranean Sea on Sunday in peaceful demand of a complete overhaul of a political system widely considered corrupt and inept.

Spain – Massive demonstrations against the government in Madrid broke out again last week after Spain’s high court sentenced nine separatist leaders in Catalonia to prison terms of nine to 14 years for holding a 2017 referendum on independence that Madrid deemed illegal. The protests turned violent over the weekend when demonstrators clashed with police in Barcelona and transport was shut down across the regional capital.

Carol J Williams
Carol J. Williams is a retired foreign correspondent with 30 years' reporting abroad for the Los Angeles Times and Associated Press. She has reported from more than 80 countries, with a focus on USSR/Russia and Eastern Europe.
Previous article
The City Council Election: A Pox On Both Your Houses
Next article
Explainer: The Real Challenge of Funding Single-payer Medicine