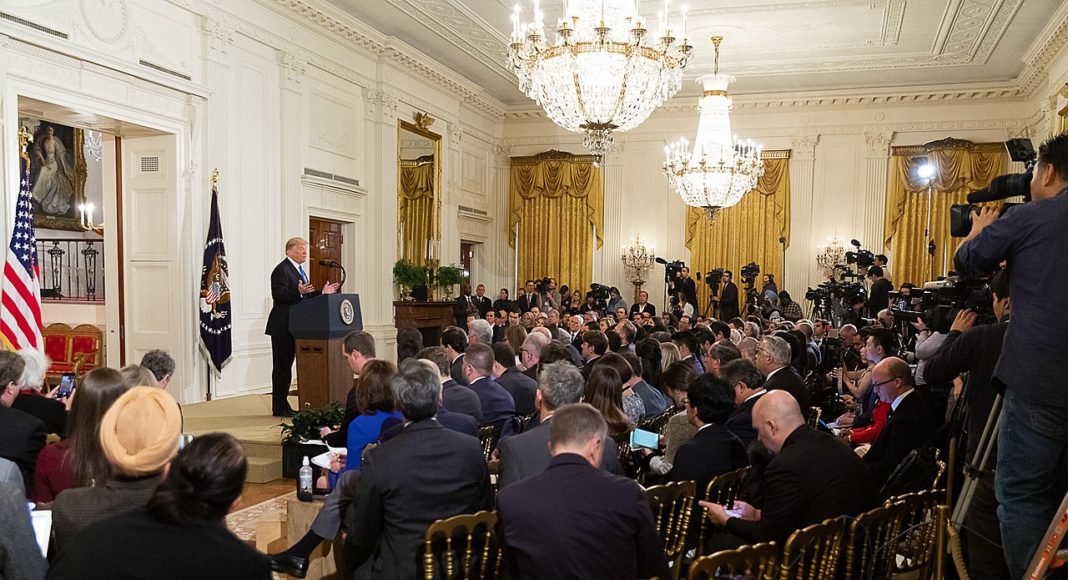 Almost lost in the fire and fury of impeachment this past week was an event that illustrates how deeply the administration of President Donald Trump has undermined the free flow of information in our society.

I’m talking about the hour-plus “news conference” the president held at the United Nations immediately following release of a summary of his phone call with the president of Ukraine. Certainly no news was revealed, as Trump launched a monotone recitation of events real and fictional related to his UN visit. He also used the occasion—and audience of news professionals—to accuse them to their face of being “fake news.”

Trump’s monologue was followed by a “question-and-answer” that also produced no news. The president called on three questioners. First off was a man from the front row—I assume he was probably Associated Press—who attempted without result to get Trump to respond to a relevant and responsible question about the Ukraine affair. Trump refused to respond to the question and launched another rambling description of his greatness.

Second to be recognized was a young woman from Fox News who asked about his trade policy with China, a familiar tactic of turning to a friendly face. The third was a woman from Venezuela—this was the UN after all—another predictable throwaway for the president. End of conference. End of show.

This at a time when the White House has ended the historic practice of holding daily news briefings by the presidential press secretary. In fact, this position has ceased to exist, occupied by a series of political flacks with no experience in media.

In three decades of political reporting, I’ve participated in my share of news conferences, but never anything like this—I found myself shouting at my television set, something I never do. Even under impeachment threat, Richard Nixon and Bill Clinton did meet with reporters, if reluctantly.

Trump’s successor, sooner or later, must address this situation and repair the damage caused by the “fake news” and “enemy of the people” rhetoric or we will slide further down the slippery slope of a controlled media that is typical of authoritarian rulers. It is simply not enough to call shouted questions on an airport tarmac or a motorcade as press access. It humiliates dedicated journalists forced to stand in the rain for a glimpse of the great man and a tweet-like quote. (The White House press corps has always had a pool at takeoffs and landings, a “death watch” of sorts in case of an airplane crash)

In the age of Twitter and other social media, it is still necessary that the leader of the nation confront in person an audience of trained journalists who can ask questions that the ordinary citizen will never be able to ask in person. It requires the president to be prepared, to understand his or her own policies, and to explain their thinking on serious issues. It simply cannot be replaced by softball questions on Fox and Friends or calls with a right-wing radio jock; or even by a rare sit-down with reporters from a “legacy” news organization. The latter has value, and has produced some significant news.

The history of presidential news management can be dated to the presidency of Theodore Roosevelt, the great master of presidential public relations. T.R. made it a practice of inviting a few reporters to question him while he got his morning shave, a regular ritual in the early 20th century. It was a show, with the nimble barber forced to pull his razor back when the president lunged out in an arm-waving outburst. He liked reporters and they liked him, and his remarks pointed them to sources for stories.

The next great media president was his cousin, Franklin D. Roosevelt, who held regular “off the record” conversations with reporters gathered around his desk. They were free to pursue his “off the record” with cabinet officers or other sources, and they did. First Lady Eleanor Roosevelt wrote a newspaper column that had wide readership, and maintained friendships with several female journalists.

President John F. Kennedy introduced the concept of news conference as entertainment, and many were televised with a wide viewing audience. JFK was playful, enjoying the give-and-take and often providing real news. He was the last president to essentially co-opt the national press, however, keeping secret his dalliances with women.

His successor, Lyndon Johnson, was awkward in public news conferences and generally distrustful of the press, particularly as the Vietnam War overcame his progressive domestic agenda. Ronald Reagan was skillful with reporters, although he was not always well versed on his administration’s policies. Reagan had an effective way of questions, “aw shucksing” his way through a tough issue. Generally, it worked well for him, except for the Iran-Contra imbroglio.

It is useful to remember, in the face of Trump’s demonizing of “the failing New York Times” that Bill Clinton had long-running issues with the Times during his two terms. Major American newspapers have scarcely been a lapdog for Democratic presidents, just as reporters for the Wall Street Journal have unearthed material damaging to Republicans.

The presidential news conference may never again return to the prominence it had in the Kennedy Administration or even those of Reagan and Clinton. It’s an imperfect vessel, easily manipulated by the president, as shown by Trump at the United Nations. My own preference is for regular small-group interactions, studiously balanced to be sure news outlets of various political leanings are represented. In large groups, advantage too often goes to the loudest voice, or a patsy singled out by the president; in a small group, competing reporters become colleagues and can pursue an evasive response.

Something must be done to replace news-by-tweet and return the historic mutual respect between media and political leaders. It should not be a Camelot-like relationship, and Kennedy’s easy treatment by the media would not have lasted. Respect does not mean subordination, and a news conference regardless of form does not replace hard-driving investigative journalism. But it is imperative that national leaders move beyond “fake news” and “enemy of the people” and appoint professionals, not political hacks, to serve as the liaison between the president and the news media.

History will judge that just as Richard Nixon was brought to account as much by the investigative work of the Washington Post and the Times, Donald Trump’s fate will be determined by the aggressive teams at the Post, the Times and others as well as by the anonymous whistle-blower and congressional investigators.

Political malfeasance is a poor topic for “legacy” television or electronic journalism; their dependence on optics and action is ill suited to the slow and tedious pursuit of paper trails and anonymous sources cultivated over years. As we learned in Watergate and are learning again with Ukrainegate, that is a role particularly suited to print media.

Talking heads, no matter how useful with analysis, seldom turn up the underlying facts. Broadcast and online can spread and explain these stories, but the roots are likely to be uncovered by “legacy” journalists, in the best sense of that term.

Floyd McKay
Floyd J. McKay, emeritus professor of journalism at Western Washington University, covered Pacific Northwest politics as a reporter and opinion writer for four decades, primarily in Oregon. He was commentator/news analyst at KGW-TV (King Broadcasting) from 1970 to 1987. Previously a print reporter, he returned to print and online reporting and commentary from 2004 to 2017 with the Seattle Times Op-ed page and Crosscut.com. He is the author of Reporting the Oregon Story: How Activists and Visionaries Transformed a State (Oregon State University Press, 2016). He lives in Bellingham.
Previous article
Political Comedy, Ukraine-Style
Next article
Three Major Misgivings About Impeaching Trump