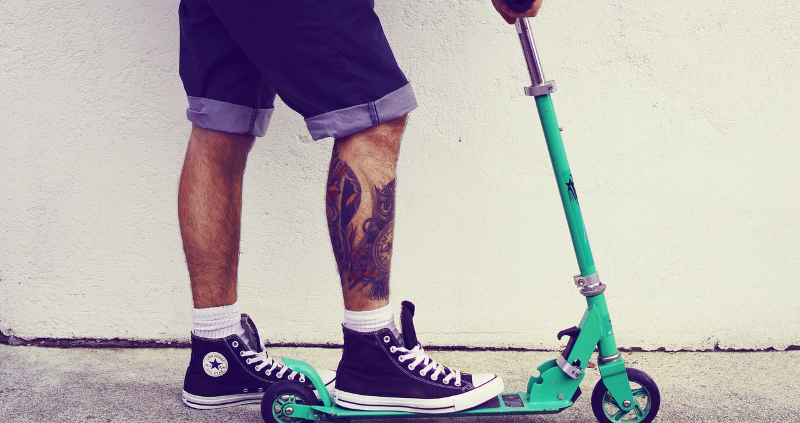 Scootergeddon? Ready or Not, Here They Come

The rush to electric scooters as a solution to urban congestion and traffic woes is hitting town in a very Seattle way: cautiously, processed-to-death—and maybe too late.

Earlier this summer, the City Council authorized a pilot program to scooterize one neighborhood with an e-scooter share program and see how it works out, but that plan’s not likely to see legislative light
until early 2020 at best.

King County is more sanguine: The Stranger reported this week that King County Council member Joe McDermott hopes to have a pilot project up and running in White Center before the end of this year.

But the high promise of using rent-a-scoots for commuters’ last mile to office or coffee-shop has begun to tarnish even in California’s early-adoption heaven: Things seem to be going well in casual, beachfront Santa Monica, but San Diego has laid significant limits on how, when, and where scooters can be used. Relentlessly laid-back Santa Barbara decided against allowing scooter rentals at all. San Francisco’s streets were littered with the things until they were abruptly banned last year until a few rules could be sorted out.

E-scooter companies had glommed on to the share business after initial trials showed some riders preferred them to bike shares. And of course Silicon Valley wasn’t far behind with piles of cash to fuel the next transportation revolution. Though Seattle still has two bike-share companies active, experience in other cities suggests that the scooters could capture a big part of the share market, dooming Lime bikes et al. But are we already too late to be experimenting? By this summer Time magazine cogently questioned whether the autonomous-scooter-rental model would ever pay off for investors.

In theory the Seattle municipal code recognizes the existence of such devices; in practice, it makes no distinction between an essential life-style machine like a powered wheelchair moving a stately 6 mph and a $1800 one-wheeled plaything for the young-well-off-and reckless, capable of speeds in excess of 25 mph.

Council proponents of e-vehicles (mainly the irrepressible and soon to depart Mike O’Brien) asked Department of Transportation planners to look into the matter. The planners in turn opted for the classic Seattle course of trimming sail in a rising gale: They assembled a “focus group” of “stakeholders” to address a strictly pre-defined set of “concerns.”

The result, in April, was a bland 44-page skim through the issues covering all forms of novel e-transport alternatives, including radio-frequency-controlled delivery bots to allow e-commerceers like Amazon and Doordash to cut their response times to mere minutes rather than hours.

It also provided a useful (but already severely dated) precis of other municipalities’ experience with them so far. Beyond that it was devoid of any attempt to suggest an overarching approach to their regulation locally. Not surprising then that a Council already preoccupied with the approaching primary elections could come up with little but a boilerplate request for yet another study, this time for a pilot scooter rental program to be submitted to a more or less brand-new Council in 2020.

And as the days and months slip by, purchasers well- and not-so well off have taken matters into their . . . under their own feet. Around us, like sleek, silent marauders of the deep, privately-owned scooters and other e-alternative modes of transport are showing up on streets and sidewalks, bike-lanes and park paths. Some are little more than training-wheel toys; others are sizzling supersharks of the street: all are essentially unregulated in any way.

Keep an eye out for the devices pictured here as they toddle, saunter, and whoosh around you. You’ll be encountering them anywhere from the paths clogged with class-changing students at the University of Washington to the paved and unpaved routes circling Greenlake and on the pedestrian-heavy sidewalks of the Central Business District.

You’re not likely to hear them coming—bicycle bells are so last century—but the whiff of their passage will remind you, if e-bikes grazing your elbow has so far failed to do that, that being a pedestrian in an age of cheap, powerful, long-lasting lithium-ion batteries is going to be as exciting for pedestrians—though not as much fun—as for the pilots surfing the electron-powered new wave.

Top image by TheDigitalWay from Pixabay

Roger Downey
Born in Canada moved to Peru's altiplano at the age of six; came to the U.S. at 10 to discover that you don't use your feet to dribble the ball. Learned from the git-go that "America" is an idea, not a place.
Previous article
The Seattle Library That Might Have Been
Next article
Poll History: The Dangers of Reviving the Kavanaugh Issue