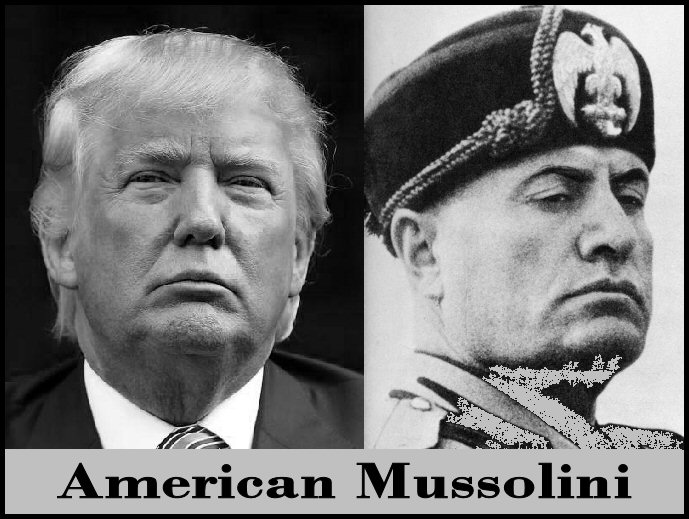 BOOKS: The Donald as Il Duce

“Is there hope for the American Republic after Trump?” Andrew Sullivan asks, in a New York Magazine article that has generated quite a buzz, including this article in Post Alley. Sullivan uses a familiar theme for examining existential challenges: the fall of Rome. That may give the president more credit than he deserves, but one can imagine the pose.

The Roman experience, even more than that of the Greeks or the British Empire, is a handy repository from which one may build a case for any scenario; much like the Bible in that regard. But in many ways, ancient Rome is an irrelevant window through which to examine politics in the 21st century. Particularly the politics of Donald Trump.

Trump is a genuinely unique figure, shaped and powered by forms of media inconceivable to even the most brilliant Romans or the most far-sighted of America’s founders. He has no precedent among American presidents.

Trump is the unsurprising man for this particular time in world history. Support for strongman leaders is on the rise, even in Europe, and new forms of media far surpass those that were available to Joseph Goebbels, Adolph Hitler’s propagandist. Yet at its roots, authoritarianism requires, more than anything else, a man (no woman need apply) willing to bend all the rules, use any tactic and betray any cause or person.

If we are to examine precedents for Trump’s behavior and outlook on life, we must look beyond ancient Rome, to an authoritarian of the 20th century, whose similarities to Donald Trump make it seem Trump modeled himself on those characteristics.

The model would be Benito Mussolini, who created a fascist party in Italy shortly after World War I and within a decade turned it into an absolute dictatorship and joined with Hitler to launch a second world war. It is sobering to remember that both Hitler and Mussolini were elected in a republican form of government. Mussolini’s career ended badly, his desecrated body hung from a rafter by some of the same people who had cheered at his rallies. But while he lived, he built a cult of personality that foreshadowed that of Donald Trump.

Policies and issues have come and gone since Mussolini, and techniques of political communication and media manipulation as well. Despite these epic changes, personality still prevails in politics. Italians thought they needed a Mussolini in 1922; Americans thought we needed a Trump in 2016. Both men dominated their first term in office by personal force alone — dominating the news with bluster and falsehoods, slandering and intimidating opponents and reaching for absolute control. They ruled by personal fiat.

We ignore personal characteristics and moral failings at our peril; policies and doctrine are negotiable, personal weakness is not.

My views are informed by a 2014 book by David I. Kertzer, which won a Pulitzer for biography (NPR’s interview of the author is excellent). The Pope and Mussolini detailed a secret agreement between the dictator and Pope Pius XI to link the Fascist party and the Vatican in common cause against communism and for mutual benefits. Reading Kertzer’s vivid descriptions of Mussolini, I watched the emergence of Donald Trump. The parallels staggered me, and my concerns only deepened after Trump took office.

The young Mussolini, blown out of World War I by an accidental explosion of an artillery piece, changed from strong socialistic views to embrace a violent anti-socialist movement he later patented as fascism. He was known as an organizer, showman and seducer of multiple women. His trademark was “the stare,” a jaw-thrusting, defiant sneer designed to intimidate. Trump’s stony, jaw-thrusting stare mimics Mussolini.

Mussolini founded a newspaper, The People of Italy; it would be his mouthpiece for three decades. Fox News is Trump’s The People of Italy, and “fake news” his regular target. Mussolini was also a violent critic of rival newspapers and as dictator he simply shut them down.

Mussolini had no real religious views but embraced Catholicism because it was the universal Italian religion and a major power; Trump has no religious roots or sentiments, but has made the white, evangelical power structure his own.

The dictator adopted the name Il Duce (the leader) and it became a crowd chant. Trump didn’t even need to change his name. Mussolini regularly used “call and response” to stir a crowd (see “Lock her up” and “Send them back”). Like several other authoritarian leaders, both Mussolini and Trump eschewed alcohol. Unlike Trump, Mussolini was a fitness buff more on the Putin scale. Both had numerous affairs, although in Catholic Italy Mussolini only married once.

As a rising politician, Kertzer writes, Mussolini “exhorted the curious crowds with his mesmerizing harangues. He was becoming a master of mass hypnosis. What he understood, in a way that none of his predecessors had, was that people were ruled most of all by emotion, and that their reality had less to do with the external world than with the symbolic one he could fashion for them.”

Mussolini, Kertzer writes, “stuck by his friends but long nursed grudges against those who slighted him. Unconnected to any particular set of convictions, he readily abandoned old ones and took up the new. Most of all he was extremely ambitious, convinced that it was his destiny to shape Italy’s future.” Even in his early years, Kertzer writes, “Mussolini could abide no competition, and any hint that one of his top ministers was getting too much favorable public attention was likely to lead to reassignment to Africa or the Balkans.”

A close associate of the dictator is quoted by Kertzer: “Guiseppe Bottai, longtime member of the Fascist Grand Council, spoke of two different Mussolinis. One was expansive and spontaneous, guided by his instincts; the other was ‘small, petty, with the little envies and jealousies of common men, quick to lie, to use deception and fraud, dispenser of promises that he had no intention of keeping, disloyal, treacherous, mean, lacking in affect, incapable of loyalty or love, quick to dump his most faithful followers.”

It took Benito Mussolini only four years to become the total dictator of Italy; he was sworn in as prime minister in 1922, and by 1926 totally controlled the nation. After their 1925 pact, the Vatican and the Fascist Party were linked, and in a nation where virtually the entire populace was of the Catholic faith, there was literally no opposition as Mussolini began to eye future conquests and alliances. That drew him to his fateful union with Hitler as well as a massacre in Ethiopia.

Mussolini overreached and attempted to project a small, largely poor nation into a worldwide role that neither he nor Italy was capable of fulfilling. He became a god in his own mind and ultimately lost the trust of his Vatican partners. Fascism still lives in Italy, as it does in other forms in Europe and in the United States. Mussolini’s larger-than-life personality failed the test of governing a free people, but the cost of bringing him down was horrendous, and latter-day imitators even now challenge Italians to maintain a republican state.

Donald Trump is similar in personality to the Italian dictator; the similarity is unsettling. Like Mussolini, he prefers loyalty to integrity and is willing to say anything and do anything to maintain power. Mussolini abolished opposition parties; Trump simply captured a 160-year-old political party, turning it into a personality cult.

Trump cannot close mainstream media as Mussolini did, but his calculated use of the term “fake news” to taint legitimate criticism of his actions and personality is a branch of the fascist tree.

Trump is certainly not a Caesar, and America is not Rome. Trump is much closer in many ways to a 20th century Roman authoritarian who wreaked incredible damage by building a personality cult and disdaining the norms of traditional republican government. Beware not the Ides of March, but the chant of “Il Duce!”  Or perhaps, “Trump, Trump!”

Floyd McKay
Floyd J. McKay, emeritus professor of journalism at Western Washington University, covered Pacific Northwest politics as a reporter and opinion writer for four decades, primarily in Oregon. He was commentator/news analyst at KGW-TV (King Broadcasting) from 1970 to 1987. Previously a print reporter, he returned to print and online reporting and commentary from 2004 to 2017 with the Seattle Times Op-ed page and Crosscut.com. He is the author of Reporting the Oregon Story: How Activists and Visionaries Transformed a State (Oregon State University Press, 2016). He lives in Bellingham.
Previous article
Outrage Fatigue
Next article
Rebound Candidates: Will Past Defeat Help Tammy Morales?