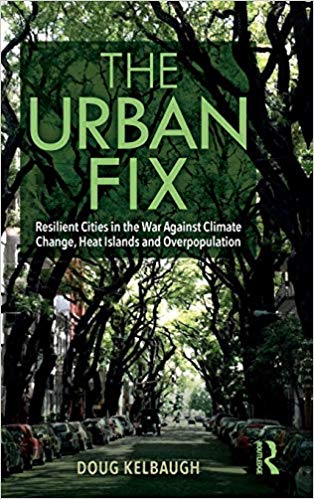 Cities are heat islands, but there’s an urban fix

In his important new book, The Urban Fix: Resilient Cities in the War Against Climate Change, Heat Islands and Overpopulation (Routledge, 2019),Douglas Kelbaugh, formerly chair of the architecture department of the University of Washington, argues for cities as engines for a healthy planet. His book outlines just about all the known ways to make them work against climate change.

Kelbaugh starts with the bad news and a central paradox. Population density is the essence of cities, and this density mitigates sprawl and so is good for environmental health. But cities are hotter than the rest of the country, by measurable amounts, because of their density. They are “heat islands,” especially where they are most dense. Think of the long urban canyons in Manhattan, where the tallest towers stand right up to the sidewalks and there’s no room for trees. Air does not move through easily, and buildings throw off heat because of their mechanical systems.  It gets worse when air conditioning throws off more waste heat.

What the book is not about is sustainable building design and construction—topics to which Kelbaugh and his colleagues have contributed over the years, from site planning to building systems and materials. It’s also not primarily about the latest technologies and strategies for tackling rampant climate change—although he tackles those in an early chapter. The Urban Fix is about what makes cities inherently hotter, and how to cool them so they aren’t, so that people continue to move into them and not out into the woods and mountains. The city Kelbaugh envisions is leafy and cool and breezy, and fully engaged with the sharing economy—such as capturing and sharing waste heat and putting it to work.

An example of coping with the threats of climate change, urban heat islands, and overpopulation is to reduce the overall heat island effect by increasing the ability of horizontal surfaces—roofs, walkways, and pavement—to deflect heat and not absorb it.  This primarily means making them lighter in color, but we are getting more scientific about our materials, too.

The Urban Fix shows that cities are getting caught up in multiple feedback loops in which warming based on one factor (like heat radiating from buildings) will accelerate warming based on another (like loss of plantings). By contrast, couples moving into the city tend to have fewer children, whether they are in the developed world or developing world.

So, what does that mean for Seattle, where Kelbaugh used to live? There’s good news since Seattle is reducing its carbon footprint in big ways, and most have to do with transportation. Our Alaskan Way Viaduct is coming down, and that traffic was a source of heat and carbon emissions. It was also a noisy, ugly barrier between downtown Seattle and the waters of Elliott Bay, which helps to keep us cool. At the same time, we are building out a regional light rail system and encouraging other modes of public transportation that in turn reduce our fuel use and carbon footprint. It’s slow and late to take root, but new multifamily housing is growing around stations. And those new buildings are more efficient and friendly to the environment than many older ones.

But we could do more. Even downtown, tall mass timber structures (up to 18 stories) are now permittable, thanks in part to trails blazed in other cities. Seattle should make room for all manner of lowrise and midrise multifamily structures, along with design guidelines and incentives that encourage shared and open-air spaces in the footprint of the structure. (Check examples designed by b9 Architects, and my personal favorite, Nicholas Court on Capitol Hill, designed by Gordon Walker.)

Seattle should consider abolishing single-family zoning for the city as a whole, just as Minneapolis has done. To preserve character and restrain speculation, we could keep certain areas limited to single family height but raise the densities allowed for accessory dwelling units.

There’s much more we can do within current laws, like ripping out lawns and adding native groundcover. Don’t just allow urban farming but encourage it and reap the cooling effect. We can plant more trees and harness the power of neighborhoods to combat invasive plant species, like ivy, that threaten them. All this will help our city breathe. We should keep air conditioning off most of the year. And we should continue to improve bicycle transportation, bikeshare and rideshare.

Douglas Kelbaugh is professor or architecture and Dean Emeritus at University of Michigan. He began his career in Seattle as an activist architect and a co-founder of the Congress for the New Urbanism, and as dean of the architecture department at the UW. You can buy The Urban Fix and meet Kelbaugh at a book signing event hosted by Peter Miller Books in Pioneer Square, 409 Alaskan Way South, Post Alley, at 5:30 on Wednesday, August 21.

Clair Enlow
Clair Enlow is a freelance journalist writing about architecture, planning and history. She’s a Loeb Fellow and an honorary member of AIASeattle.
Previous article
Remembering Tom Gibbs, a Titan of Seattle Infrastructure
Next article
Why the saga of Chief Joseph still haunts our region