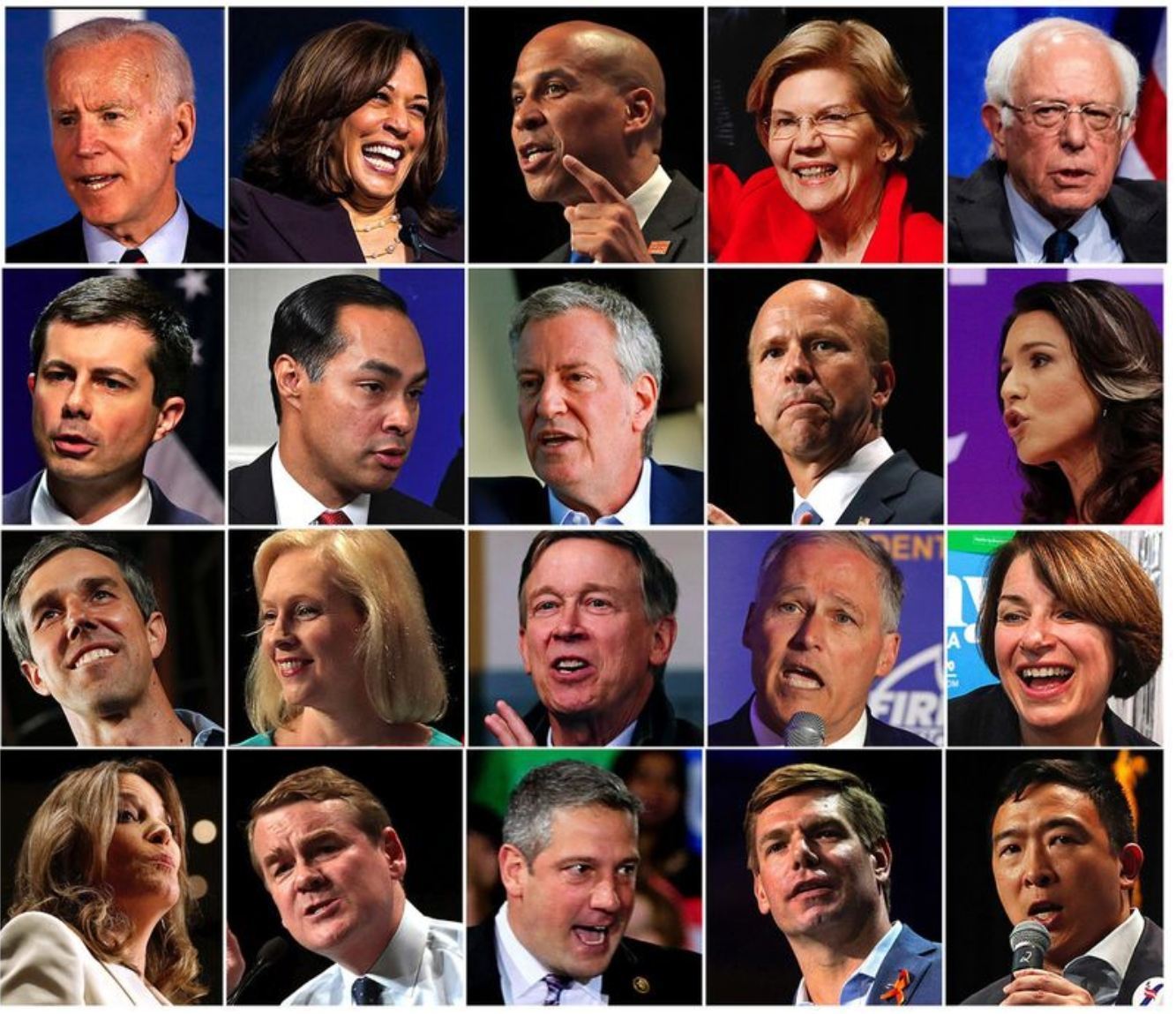 So, the Democratic debates are nearly upon us, and it looks like a wildly uneven set up between the two nights. The first night will include only one of the top five polling candidates, the supposedly surging Elizabeth Warren, while the other four (Biden, Sanders, Harris, Buttigieg) all go head-to-head-to-head-to-head on the second night.

This uneven distribution sets up all sorts of interesting scenarios for how the two nights of back-and-forth play out. Anything can happen (or perhaps not much will happen), so only a fool would try to predict how things will play out. But I long ago cemented my bona fides as a fool, so below, as grist for the cocktail party parlor game mill (how’s that for mixing metaphors?), are three debate scenarios that I think are plausible. Please be kind to me after, as is inevitable, all of them turn out to be wildly off base.

Scenario 1: Liz Warren Has a Plan for How to Appear Cooler than She Actually Is

Expectations for Night 1 are already shaping up to be the fairy tale of Progressive Snow White and the nine dwarfs.  Warren is expected to dominate – the media has pretty much already declared her the winner of this night – and the only concern seems to be whether enough people will turn in to make her triumph meaningful.

The nearly nonexistent expectations for the other nine candidates debating with Warren (including Inslee, Booker, Klobuchar and O’Rourke) creates a fantastic opportunity for them – it’s obvious that the most direct way to win this night is for one of them to challenge, and best, Warren in a head-to-head exchange – but let’s say that (for once) the national media is right, and Warren dominates the kidz table on Night 1.

Here’s how it goes down: During the debate, Warren drops a couple of scripted zingers about Trump, and gets in couple of free shots at Uncle Joe for good measure. “Trump’s ‘good people’ were marching with torches in Charlottesville,” she says, “while Joe Biden’s good people were advocating for white supremacy in the Senate. Well, one thing about me you should know: I don’t think racists are good people!” Mostly, though, she says, “I have a plan for that!” a lot.

In response, the very loud and visible Twitter and Pronouns Hyperpolarized Educated White Progressive Cosmopolitan Activist wing of the Democratic Party, and the media talking heads (who mostly are card-carrying members of that wing), swoon. They declare her a singularly funny, accessible and broadly appealing candidate (none of this is true, but that won’t become apparent until much later, when it’s far too late). Highly favorable “she’s not an elitist stiff like Hillary” comparisons dominate the post-debate cablenet commentary.

None of the other also-ran challengers avail themselves of the low hanging fruit opportunity to challenge her. Inslee continues to be a broken record, turning every question he receives into a call for bold action on climate change; just like before the debate, everybody appreciates his sincerity but no one wants to vote for a presidential candidate who only cares about one issue. Klobuchar tries to claim she’s electable, and talks about the Midwest a lot, but her pitch is awkward and boring. Beto comes across as the substance-less pretty boy hipster that he is.  Booker is compelling but vague, and is completely outshone by Warren’s star power.

On Night 2, Bernie goes on the attack, ripping Biden repeatedly for being a politically impure, status quo appeaser who’s oblivious to the radicalization of the Republican Party and who offers no real solutions to the problems the country is facing. Plus, Bernie points out, Biden cozies up to racists and then refuses to apologize for it. Sanders’ grumpily aggressive attacking style is a turn off to everyone but his partisans, but he also lands some big hits on Uncle Joe. Biden hits back too, not as effectively, and the end result is they both look bad. Kamala, per usual, is boring and overly cautious, fading into the background after a bit of tough talk about Trump. Mayor Pete has some good moments, helping himself, but he looks like a 14 year old midget onstage (he’s a cherubic 5’8”, Bernie and Biden are both 6’0”), and anyway the media coverage that night is entirely dominated by discussion of Bernie’s attacks on Biden.

In the run up to Day 1, expectations soar for Warren, given the perceived weakness of her competition on kidz night. When the debate finally begins, Warren does her thing; she says “I have a plan for that!” a lot, and the Twitter and Pronouns wing experiences the Rapture. For everyone else, though, her down home dropped g’s schtick (“I’m thinkin’ it’s time Mark Zuckerberg does a little explainin’” comes across as more than a little fake and forced, and much of the TV audience, which has never actually seen her speak in person before, decides they really don’t like her voice.

Meanwhile Booker, a smooth and confident orator, makes a big positive impression. He talks about his parents, and how they overcame racism and setbacks to live the American Dream, and how they taught him the promise of America. He gets in the best zinger of the night, saying, “I didn’t need to take a DNA test to convince people I’m a person of color who understands in my bones the struggles of those communities.” Warren is noticeably flummoxed by this, and the media smells blood and begins to pile on Warren for her fakiness.

Then in Day 2, Bernie goes on the attack against Biden, but Uncle Joe laughs it off. He tells the audience, “here we go again with the purity tests and the circular firing squad!” He says, “You what the most important test is? It’s who can beat Trump! Who do you thinks going to do better against Trump, me or Bernie over there?” He zings Warren too: “Look what happened with the DNA test thing. What a mess. Liz tried to take on Trump, and he destroyed her! Are you willing to risk that happening again in the general election? The choice for you is to go with one of these risky candidates or you can go with the guy you know is gonna beat Trump – his own polls say I’m beating him in a landslide.”

And he turns the friendly-with-racists charge on its head: “I may not have said that perfectly but you all know what I meant. If you’re going to get things done in Washington, you have to be willing to work with people you may strongly disagree with. Look, here’s the bottom line: are we going to continue with the politics of hyper-partisanship and paralysis and dysfunction or are we going to at least try to work together to solve problems? My opponents want to maintain the angry, do-nothing status quo in DC. If you elect me, I’m going to work with everyone, even the people I strongly disagree with, and I’m not going to apologize for that.” Biden’s electability pitch, better angels bipartisanship and aw shucks lunch pail humor works; Bernie comes across as a crabby septuagenarian and his hits don’t land.

Coming out of the debates, Warren’s upward momentum is halted, and chunks of her voters start peeling off to Kamala “Reparations!” Harris, Booker and Mayor Pete. A big chunk of Bernie voters move to Biden. Booker is vaulted into the first tier, tied with Bernie, but they’re both now way behind Uncle Joe, and Warren and Harris are stuck behind them in the high single digits.

Kamala Harris is the candidate in the race with the highest ceiling; she has the most potential to unite the uneasily coexisting wings of the Democratic Party. A strong, intelligent, accomplished, confident, multi-racial woman of color, she checks a lot of identity boxes and has obvious appeal for progressives. Her track record as a successful prosecutor and a tough, no nonsense deal maker potentially gives her credibility with more moderate Biden wing Dems.

She’s also my front-runner right now for “candidate running the most disappointing campaign with the dumbest strategy” booby prize. Harris and her advisors seem to believe that her pathway to victory is by running maximally left to win over white progressive activist Warren supporters. That’s completely wrong — her pathway to victory is by straddling the progressive center line of the party, allowing her to peel away Biden supporters and combine them with some support from strong progressives. Instead, by copycatting Warren and running as a Dem divider rather than a Dem unifier she’s in a slow fade right now; her “I’m just like Warren, only safer, less substantive and not white” act seems like what it is – a pale imitation of the real thing. If she actually figured out a play for Biden voters – many of whom are older, unwoke African Americans who would be inclined to support her if she offers the right message – she could be a powerhouse in this nomination battle.

I don’t hold out all that much hope anymore that it’ll happen, but let’s say she does figure it out by debate night. So on Day 1 Warren does fine, but doesn’t shine. On Day 2, Bernie and Biden get into a heated back-and-forth, when Harris unexpectedly jumps into the fray.

In finding her unifying voice, here’s what she says: “You know what you just saw between Joe and Bernie? That’s not the future of the Democratic Party, that’s its past. I think it’s time to move past these tired, old fights. That’s what my candidacy is about. We can be strongly progressive, and be strongly pragmatic. We can be passionate about our principles, and forge compromises that improve the lives of the American people. We can address income inequality, without demonizing businesses that provide jobs and boost our economy. And we can provide steady, experienced leadership, and advocate for bold systemic changes that are long overdue. We can be strong and compassionate, and we can restore stability and dignity to the White House. That is what my campaign is about.”

If she did this successfully, she’d start to eat into both Biden and Sanders’ bases. She’d start to come off favorably in the comparison with Warren, who still arouses significant suspicions from the more moderate wing of the party. She’d make the possibility of electing a woman of color president seem like a historic uplifitng moment, in the way electing Obama in 2008 felt like a historic, uplifting moment.

Because of her potential, she’s still my favorite in this this race. Like I said, I don’t think she’s going to figure it out, and in all likelihood she’ll stick to the usual bromides and too-far-left sacred cows, and in so doing will cede the debate wins to her rivals. But a boy can dream.

Sandeep Kaushik
Sandeep Kaushik is a political and public affairs consultant in Seattle. In a previous life, he was a staff writer and political columnist at the Stranger, and did a stint as a Washington State correspondent for Time Magazine and for the Boston Globe, back in the olden days when such positions still existed.
Previous article
Pols Take On Press
Next article
Transition Without Tears At Benaroya Hall