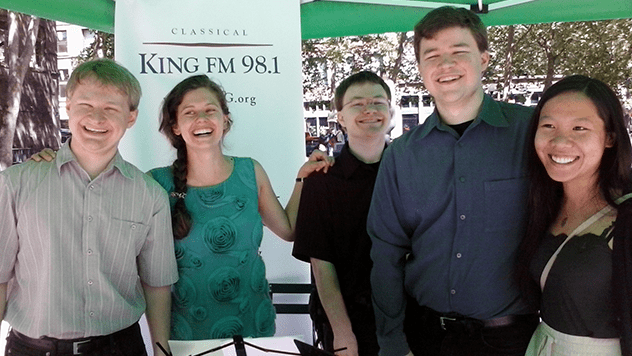 The Once And Future KING

KING-FM, Seattle’s listener-supported classical music station, will be moving early next year to new digs in the new Opera Center (formerly Mercer Arts Arena, formerly hockey rink) adjacent to the McCaw Hall, where the Opera and Ballet perform. Thereby hangs a tale about this revered institution.

The station, founded as a public service by Dorothy Bullitt, has certainly had its ups and downs. Many remember the subsidized early days under Mrs. Bullitt, who loved classical music and considered this part of her broadcast empire to be a gift to the community, a kind of golden age for the station that has not been sustained.

Might the deal to stay at Seattle Center, which from the outside looks like a natural move to be embedded in one of the city’s biggest musical institutions, signal a return to a new Golden Age?

Once one of the strongest commercial classical stations in the country, with enviable ratings consistently among the city’s top ten most-listened-to stations, KING shifted to non-profit status nine years ago as its business model faltered. Over the past two decades numerous classical stations around America have closed as listening habits changed. The shift to non-profit stabilized the business, and the disappearance of annoying ads took care of one of listeners’ chief complaints over the years.

The departure of a longtime station manager 18 months ago led to hiring a new leader, Brenda Barnes, an experienced radio executive with deep musical knowledge, from Los Angeles classical music powerhouse station KUSC, which has thrived and expanded even as classical radio generally has declined. She was widely seen as a catch when KING snagged her.

The move itself had an urgency about it. KING’s longtime landlord, ArtsFund, decided to sell its lower Queen Anne building to an apartment developer (the funds go in part to the ArtsFund endowment), and so Ms. Barnes arrived at her new job to learn that a three-year cushion was only two years. The new location at the Opera Center, just east of the McCaw Hall, where the Opera and Ballet perform, was KING’s initial choice. But that would have meant shrinking from its current 6,000 square feet to 4,000, so they had to go looking elsewhere in this super-heated real estate market.

The new Opera Center lease is still for 4,000 square feet, but the Opera came back with an offer to share some additional space, including station performances in one of the new rehearsal rooms, and so the deal was struck. KING says it has already raised $2.3 million of the $3 million needed to build out the new station, which will be on the second floor of the handsome new Opera Center (rehearsals, offices, shops, storage).

The station has a storied, though bumpy past. When Mrs. Bullitt died, the station passed to her two daughters, Patsy Bullitt Collins and Harriet Bullitt. After her death, Harriett and Patsy decided to sell them, carved out KING FM, and created the structure to ensure the station had the best chance of continuing to operate as a classical station. They discovered that selling the station could not legally bind the new owner to a music format, so they created an elaborate legal structure to own and operate the station.

Part of the previous deal was to have the Symphony, Opera, and ArtsFund have dedicated positions on the board (still the case) and to surplus revenue from the commercial station. (ArtsFund distributed its share to smaller musical organizations, back in the day.) That largess diminished as advertising revenue shrank, and is no longer applicable since Barnes concluded that such a distribution goes against the terms of the non-profit status. Even so, the Symphony and Opera and ArtsFund still benefit by promotions, broadcasts, and the station’s efforts to get more people hooked on classical music. KING has convinced 16,000 listeners to become members, and member donations cover around 80 percent of the station’s budget. Recent fundraising has been strong, says Barnes, exceeding projections.

Indeed, you might say that promoting musical performance is the primary mission of the station, as opposed to just being the best possible classical music station. Barnes notes, for instance, of the 250,000 listeners per week (many just for background music), only 15 percent have ever attended a classical music concert. That’s very low; with the more typical figure being 40 percent, says Barnes. You can see this as an opportunity for growth and a mandate to do more to get patrons in those seats. You can see this a measure of the station’s success in reaching a wide general audience. Or you can see it as an indicator of the modest interest in live classical music in this town, or the way KING, in its eagerness to reach resisters to such music, has dumbed down the product for serious fans.

The station was certainly guilty of this when it was chasing advertisers. Since Barnes arrived, she has instituted some welcome changes. No longer are the announcers pre-recorded, so they now live in the moment with listeners. The ban on vocal music during the daytime has been partially lifted. The old days when announcers got to pick the music they wanted to play are long gone. A music director, Aaron Stoess, picks the music, while announcers meet monthly to make suggestions and review the playlist. More adventurous and longer music is mostly aired in evenings, when audiences are low and “active listening” takes place, or at such times as Sunday morning. Long ago KING decided to have announcers eschew the cultivated, graduate-student-in-musicology tone, but instead have the music be serious but the announcers to be upbeat and friendly and personable. And of course it’s a great relief not to have those jarring advertising jingles.

So KING-FM is gradually improving, and the new home secures the immediate future and suggests new opportunities. But probably (given its constraints and mission) the station isn’t ready for the kind of deep contemporary involvement with the city’s musical life that some other stations (notably Seattle powerhouse KEXP, which functions as a kind of clubhouse for indie music at Seattle Center, or classical station WQXR in New York, with its streetside performance space studio in the Juilliard building at Lincoln Center) are doing.

Call it a Silver Age.