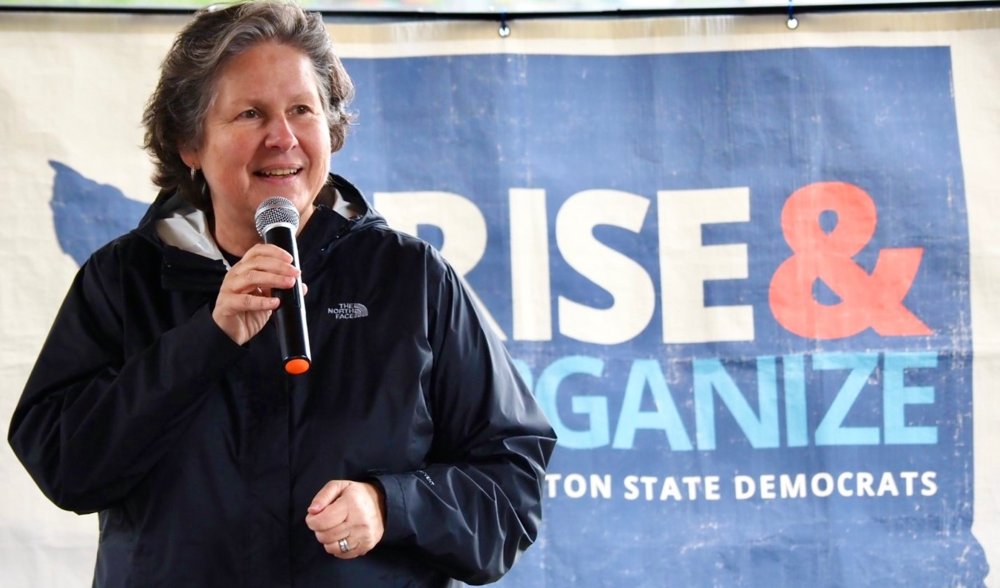 Out on a High Note: How Tina Podlodowski Rode a Blue Wave

During six successful years as Democratic State Chair, Tina Podlodowski has watched, pushed, and organized as Washington has completed its transition from borderline “purple” to being a solidly “blue” Democratic state.

She’s had help, primarily from ex-President Donald Trump, who was skillfully demonized and hung around the necks of Republican nominees in a state that used to elect reformist, moderate GOP politicians to state and federal office.  Podlodowski is going out on a high note, with Democrats in control of every statewide elective office and eight out of ten seats in the U.S. House of Representatives.

Former two-term King County Democratic Chair Shasti Conrad was instantly in the race to succeed Podlodowski. ”No one else is running for state party chair yet,” noted Andrew Villeneuve, executive director of Northwest Progressive Institute and long active in the D’s state central committee.

Conrad is an accomplished young politico, a veteran of the Obama administration and Bernie Sanders presidential campaigns, and one not bashful about her accomplishments. “I am the first woman of color to serve as chair for the King County Democrats and the first chair to be reelected in more than a decade: I took a struggling organization mired in debt and transformed it into a thriving, engaged organization with the funding to produce electoral wins,” she says in a website boosting her candidacy.

Podlodowsi was an executive at Microsoft, served on the Seattle City Council, and later headed the Lifelong AIDS Alliance. She lost a race for Secretary of State in 2016, but then ousted then-chairman Jaxon Ravens after an election in which Democrats won major state offices but suffered numerous defeats down the ballot. She has been the party’s first LGBTQ chair.

Podlodowski is following a model set by the late Democratic chair Karen Marchioro.  Marchioro relinquished reins of the state party in 1993, after Democrats put Patty Murray in the U.S. Senate, captured eight of the state’s nine (at the time) U.S. House seats, flipped two of those House seats, swept the Legislature, and elected liberal Mike Lowry as Governor.

The party went into the tank under successor Charles Rolland.  Republicans took six U.S. House seats from the Democrats in 1994, becoming in Newt Gingrich’s words “ground zero of the Republican revolution.”  The GOP won control of the state House of Representatives, and reelected Sen. Slade Gorton, despite two visits to the state by President Clinton.  Rolland was sent packing by Paul Berendt, who revived the party.

Under Podlodowski, Democrats flipped control of the Washington State Senate in 2017, when Manka Dhingra won a special election after the death of GOP Sen. Andy Hill. They solidified hold on both houses of the Legislature in 2018. That same year Issaquah pediatrician Kim Schrier won a seat in Congress that had been held by Republicans for 36 years, and Sen. Maria Cantwell coasted to reelection.

Last year, in the face of a predicted “red wave,” Washington Democrats expanded their legislative majorities and scored the country’s biggest congressional upset with the victory of Marie Gluesenkamp-Perez in Southwest Washington.  Sen. Patty Murray withstood an onslaught of attack ads to win reelection with 57 percent of the vote. Democrat Steve Hobbs was elected Secretary of State, an office held by Republicans since 1964.

Podlodowski did it with a theme of “Rise & Organize,” staging training for party workers across the state.  She tried to recruit Democrats to run even in the most solidly Republican rural districts of Eastern Washington. The tin can of Trump, along with militia-linked Republican state legislator Matt Shea, was tied to GOP candidates.

The Democrats also hit hard at the abortion issue, in the wake of the Supreme Court decision overturning Roe v. Wade.  Washington has a long pro-choice record, dating from a statewide 1970 vote to legalize abortion.  The 1970 pro-choice campaign was led by liberal Republicans, a political species now verging on extinction in the Evergreen State.

Podlodowski was a “yellow dog Democrat,” unwilling to have truck or trade with any Republican.  She pilloried Seattle City Attorney candidate Anne Davison as “not fit to hold any office of any kind” in 2021. Davison was running for a nonpartisan office against defund-the-police supporter Nicole Thomas Kennedy.  Former Democratic Govs. Christine Gregoire and Gary Locke had endorsed Davison, who was elected.

King County Democrats, especially in Seattle, have veered left of late.  The party backed Lorena Gonzalez for Seattle Mayor in 2021, running against fellow Democrat Bruce Harrell, who won convincingly.  The local party also endorsed Kennedy, despite her record of often-profane Tweets denouncing the Seattle Police.  Both lost, along with leftist City Council candidate Nikkita Oliver. Conrad has raised money for unsuccessful Ohio congressional candidate Nina Turner, a Sanders co-chair who once compared voting for Joe Biden to eating “a bowl of shit.”

Rural, moderately conservative Democrats, once an influential species in state politics, are impossible to find nowadays. The party is now urban, suburban, and exurban.  Suburban King County, once a Republican mainstay, now overwhelmingly sends Democrats to the Legislature and Congress. Dominating margins in three Seattle legislative districts gave Jay Inslee his margin to be narrowly elected Governor in 2012. Seattle bashing has backfired on Republicans who’ve tried it.

Podlodowski’s successor will inherit a Democratic state, in Ben Franklin’s famous phrase, “if you can keep it.”  The long-ago warning of 1994 should remain as a reminder, however, of what happens when a governing party screws up, gets full of itself, or veers into ideological excess.