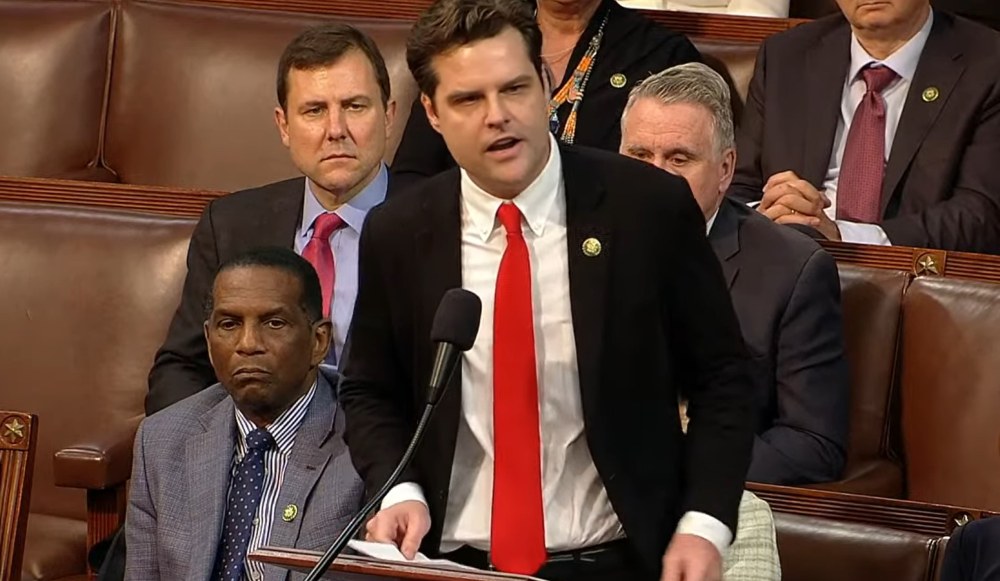 Republicans Melt Down Over Speaker Election

The Republicans’ thin majority in the U.S. House of Representatives was unable to elect a House Speaker as the 118th Congress convened Tuesday. It was a humiliating defeat for GOP leader Kevin McCarthy as votes from 20 far-right GOP members blocked him from being elected to Congress’ top post.

The House adjourned until midday on Wednesday.  The stalemate, preventing organization of the House, left Washington Sen. Patty Murray temporarily second in line for the presidency – a position normally held by the House Speaker.  Murray was unanimously chosen as President Pro Tempore of the U.S. Senate, where Democrats hold sway, the first woman to hold a position hitherto the domain of tough old men.

In all three House ballots for Speaker, McCarthy with 202 votes trailed new House Democratic Leader Hakeem Jeffries, who gained unanimous support from his 212-member caucus.  The Democrats’ appeared in high spirits, cheering their leader’s vote totals on the House floor.

Rep. Suzan DelBene, D-Wash., chair of the Democratic Congressional Campaign Committee, was gleeful in a statement, saying: “The 118th Congress has yet to begin and Americans are already seeing how disastrous GOP control of the House is going to be.  No matter who becomes Speaker of the House or how many votes it takes, the contrast is clear, and in two short years voters will reject the MAGA chaos and confusion.”

The Speaker stalemate put off by a day the swearing in of Rep. Marie Gluesenkamp-Perez, D-Wash., the auto repair shop co-owner elected to represent Southwest Washington in Congress.  With deft understatement, MGP underscored dysfunction on the other side of the aisle.  “We want people who fix things for a living,” she said, adding: “The candidate selection process is fundamentally broken.”

Ex-Rep. Herrera Beutler surfaced on CNN.  “I hate it, I absolutely hate it,” she said of the Speaker stalemate.  “There’s nothing good that comes of it . . . I think extremes right now on both sides of the aisle are wagging the dog.”

The battle over Speaker produced angry divisions even among MAGA Republicans.  Rep. Marjorie Taylor Greene and onetime House Speaker Newt Gingrich backed McCarthy, with Gingrich going on Fox News to denounce caucus dissidents.  On the House floor, however, attention-hungry Rep. Matt Gaetz, R-Florida, sneered at McCarthy’s lengthy pursuit of the Speakership, saying the California congressman has “sold shares of himself for more than a decade to get it.”

Ex-President Trump had given his endorsement to the supine McCarthy, who made a penitential pilgrimage to Mar a Lago shortly after the January 6, 2021, insurrection at the U.S. Capitol.  But Trump backed off when asked later in the day, telling a radio host: “We’ll see what happens.”

After the first ballot the 20 holdouts gave their votes to Rep. Jim Jordan, R-Ohio, a hard-liner and Fox News fixture slated to chair the House Judiciary Committee.  In turn, however, Jordan gave a nominating speech for McCarthy.  Both remaining Republicans in Washington’s delegation, Reps. Cathy McMorris Rodgers and Dan Newhouse, voted for McCarthy.

What is going to happen? McCarthy has kowtowed to the far right, promising multiple investigations of the Biden family and even of the January 6 committee that has been investigating the insurrection.  He has delivered lengthy, hyperbole-laden House floor speeches against such Senate-passed legislation as the Inflation Reduction Act.

Not enough, say the dissidents. In words of Montana Rep. Matt Rosendale, speaking to the Washington Post: “We need a leader who can stand up to a Senate and President Biden, and unfortunately it isn’t Kevin McCarthy.”  Rosendale argued that more rules are needed to empower the GOP rank-and-file.

But concessions have made McCarthy look weak and only fueled the far-right’s demand for more.  “Time to make the change or get out of the way,” they said in a letter to McCarthy late on Monday. To which an angry McCarthy replied, at a caucus meeting, “I earned this job.” He rebuffed demands for by Gaetz and Rep. Scott Perry, R-Pennsylvania, for choice committee assignments

The remaining moderate Republicans in the House have lined up with McCarthy, saying they will stick with the embattled leader come hell or high water.  “Kevin MCCarthy is going to be Speaker: I don’t think there is any question about it; I think the question is how many rounds it takes,” said Rep. Brian Fitzpatrick, R-Pa.”

Sent to the sidelines, ex-Rep. Herrera Beutler urged McCarthy to show backbone.  “The reality, the majority of the Republican caucus is not going to give into these demands,” she told CNN.  “When you put your foot down, you get better results than not.”

The mess on Day One of the new Congress is embellishing the hardass reputation of former Democratic Speaker Nancy Pelosi.  With a narrow, 222-seat majority, Pelosi was able to push through landmark infrastructure legislation, the Inflation Reduction Act, a landmark bill to revive America’s computer chip industry, and federal recognition of same-sex marriage.

Joel Connelly
I worked for Seattle Post-Intelligencer from 1973 until it ceased print publication in 2009, and SeattlePI.com from 2009 to 6/30/2020. During that time, I wrote about 9 presidential races, 11 Canadian and British Columbia elections‎, four doomed WPPSS nuclear plants, six Washington wilderness battles, creation of two national Monuments (Hanford Reach and San Juan Islands), a 104 million acre Alaska Lands Act, plus the Columbia Gorge National Scenic Area.
Previous article
Recipes and Other Trophies from an Investigating Reporter
Next article
2023: Dawning of The Age of Seattle Austerity