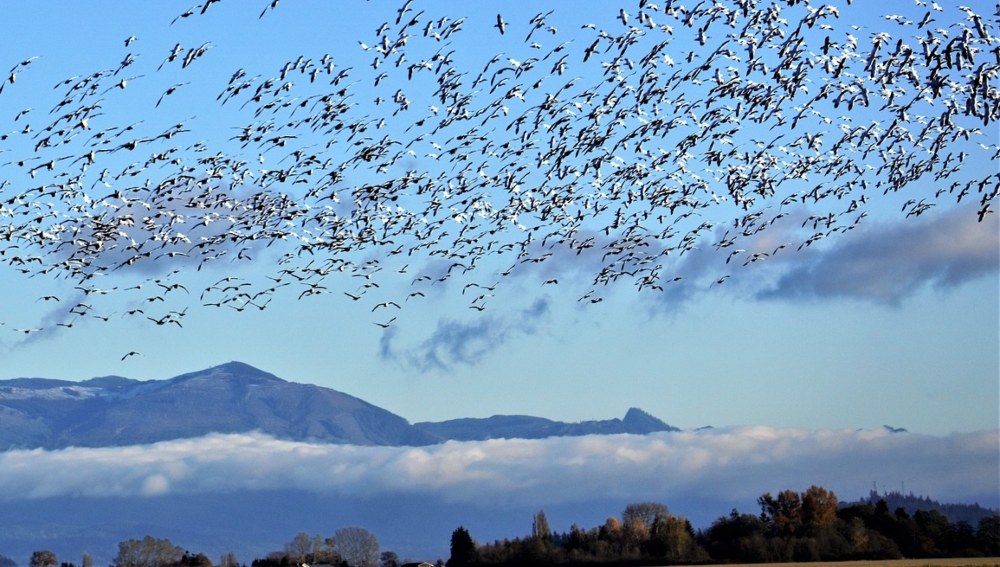 How the Northwest Once Drove National Environmentalism

The big golden oak table, in the dining room of my family’s Bellingham home, recorded the growth of America’s environmental movement, including a marked-up copy of Rachel Carson’s book Silent Spring and reports on the DDT-caused decline of bald eagles which populate the Skagit Valley each winter.

Research by my journalist mother ranged from drafts of her Sunset magazine article on the proposed North Cascades National Park, to pictures she took rafting down Idaho’s Salmon River with Sen. Robert F. Kennedy and his family. She covered a hike by U.S. Supreme Court Justice William O. Douglas protesting Kennecott Copper’s plans for an open pit mine in the Glacier Peak Wilderness, and briefs by Seattle zoning lawyer John Ehrlichman opposing an aluminum plant on Guemes Island.

My father would periodically grumble, “Dolly, for crying out loud!” and she would clear just enough space so the family could eat dinner.  My mother would pass on to me her messy desk habits, and her environmentalism.

The book is compelling history, of big-picture change told by accounts of battles big and small.  It’s full of surprises.  Ehrlichman went on to be a Watergate villain, but as a Nixon aide he helped block a gargantuan airport proposed for the Florida Everglades.  Lyndon Johnson threw a fit when learning that his Interior Secretary, Stewart Udall, had renamed Washington, D.C.’s football stadium after Bobby Kennedy.

America sure needed a conservation movement 60 years ago.  Smog hung over its cities, while lead in gasoline poisoned its people. The Cuyahoga River in Cleveland caught fire.  Life magazine carried a full-page color picture of Bellingham Bay, its waters the color of tobacco spit from pulp mill pollution.  The signature redwoods of California were under assault from chain saws. The U.S. Bureau of Reclamation was pushing for two dams in the Grand Canyon, one of which would have inundated Lava Falls, its greatest rapid.

Rachel Carson, a soft-spoken marine biologist, won JFK’s admiration with her book The Sea Around Us. Later, with Silent Spring, she brought a nation’s attention to the danger posed to the planet by DDT and pesticides. She took enormous abuse from the chemical industry, but in Brinkley’s words, “It was Rachel Carson, full stop, who in an urgent, visceral way, sparked an eco-revolution.”

The 1960s and early 1970s were an era of government activism out of the “other” Washington.  We also had leaders moved by personal experience.  “The trouble is, Jack, you never slept on the ground,” William O. Douglas told his friend President Kennedy.  But JFK was a sailor and loved the water. Brother Bobby rafted rivers. Celebrating creation of the Cape Cod National Seashore, JFK waxed eloquent hoping its “marshes, the seascapes, the sea itself should remain inviolate for all times for all men.”

Lyndon Johnson and wife Lady Bird were products of the Texas Hill Country, although LBJ prowled the ranch in his Cadillac convertible and crossed the Pedernales River in an amphibious vehicle.   Lady Bird Johnson championed the Highway Beautification Act and was a canny strategist during battles over creation of the Redwoods National Park.

Under Kennedy and Johnson, America gained the North Cascades National Park in our “American Alps,” and the Canyonlands National Park in Udall’s beloved Colorado River canyon country. The Redwoods National Park contains a grove of towering trees named after Lady Bird.  With steel mills and industrial ports nearby, Udall achieved creation of the Indiana Dunes National Lakeshore (now National Park), a spring refuge I came to know as a student at the nearby University of Notre Dame.

Richard Nixon was no conservationist.  The Brinkley book contains a famous picture of our 37th president walking on the beach near his San Clemente, Calif., home . . . in wing tips.  However, political animal that he was, Nixon wanted to get a jump on the Democrats’ issue.

Yet Nixon was still vindictive, suspicious, and paranoid.  He vetoed the Clean Water Act, crafted by his presumed 1972 opponent Sen. Ed Muskie.  (The Senate quickly overrode the veto.)  At another point, Nixon summoned EPA Administrator William Ruckelshaus and raged, “You better watch out for those crazy enviros, Bill. They’re a bunch of commie pinko queers.”

Characters from the Northwest populate Brinkley’s book.  Sen. Gaylord Nelson of Wisconsin came up with the idea for Earth Day, but principal organizer of the galvanizing 1970 protest was a Stanford law student named Denis Hayes, long head of the Bullitt Foundation. The rotten egg smell of mills in his native Camas, Washington, would make Hayes a lifelong environmental advocate.  “Wild Bill” Douglas’ conservation zealotry had its birth as a Yakima boy hiking the hills to rebuild his legs from polio.  He later used retreats on the Minam River in Oregon and Goose Prairie east of Chinook Pass to ride his horses and write his books.

“I’m willing to bend the law in favor of the environment and against the corporations,” Douglas famously said, expressing exactly the opposite philosophy as that deployed by today’s conservative majority on the court.

An Indianapolis lawyer/politician, Bill Ruckelshaus twice headed the EPA, later moved to the Northwest and went native, becoming the wise man of our salmon politics.  As chairman of the Senate Interior Committee, Sen. Henry Jackson masterminded passage of NEPA, sponsored the North Cascades Act, and pushed through the Chesapeake & Ohio National Historical Park.

Brinkley tells the stories, celebrating this era of social change and national leaders who drove it.  My quibble: While Brinkley profiles some activists, he doesn’t quite get how they helped drive that change.  In order to climb and move mountains — or undermine such bureaucracies as the Bureau of Reclamation — you need the aid of “Sherpas.”  When North Cascades advocates came to him, “Scoop” Jackson gave them marching orders: Make me do this.  He wanted public support for wild places to which he could respond.

Citizen conservationists supplied it, the Sierra Club published its book North Cascades: Forgotten Parkland.  Sunset travel editor Martin Litton pushed pieces on the North Cascades and Grand Canyon.  Mt. Vernon physician Fred Darvill bought shares in Kennecott stock, showed up at their stockholders meeting in New York, and gained national attention displaying photos of Image Lake and Glacier Peak. It’s unclear to this day what Sen. Jackson said to Kennecott, but the open pit mine was not to be.

Silent Spring Revolution is more than valuable history. It is inspiration to those struggling to inject a sense of public urgency to what has been America’s hesitant response to climate change. It evokes an era when conservation was a bipartisan cause.

“One of these days I’ll move to the Pacific Northwest,” jokes Brinkley, who teaches at Rice University and lives in Austin, Texas, in a note with my copy of his book.   He knows our region well enough to write movingly of how we helped drive a national movement.