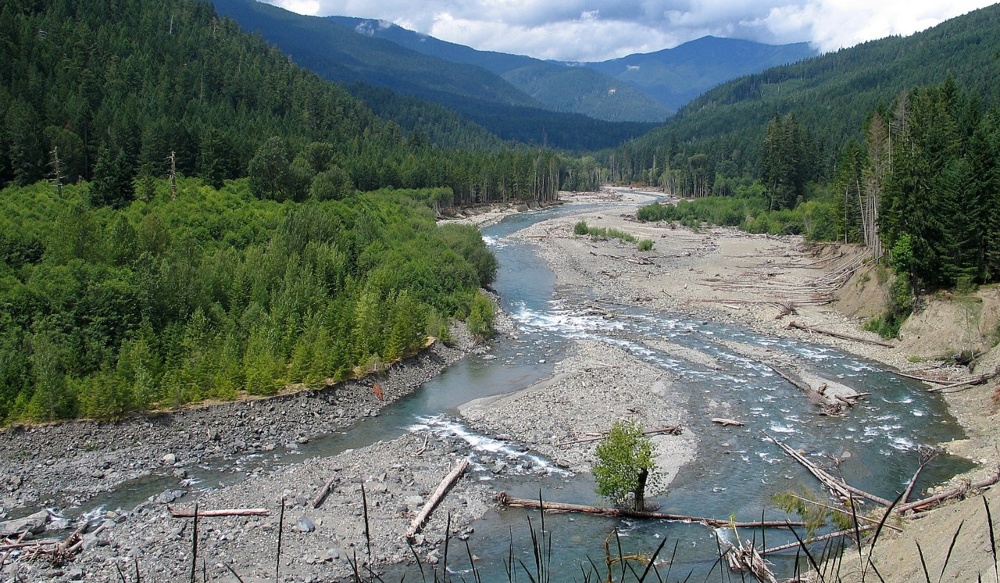 A Tale of Two Treks Across the Olympics

Among the candidates for “the last American untamed wildernesses” are the Florida Everglades, most of Alaska, and our own snowy Olympic Mountains.  Tourists and adventurers now frequently roam these natural wonders, sometimes with the help of professional guides and semi-luxurious accommodations.  The first Euro-American winter investigation of the Olympics was supported by the Seattle Press, forerunner of The Seattle Times.

The idea for this great adventure came from a grizzled Scot and local mountain man named J. H. Christie, who died in 2003.  He threw down the challenge in a letter to the Seattle Press describing his background: plenty of experience as a hunter and explorer, an owner of good health and high spirits.  Perhaps to Christie’s surprise, the newspaper responded positively, paying for his adventure with the assurance that the paper had an exclusive about what many Natives described as the home of the “bird god.”  Former Washington Territorial Gov. Eugene Semple once described the snow-capped peninsula as a “land of mystery, awe-inspiring in its mighty constituents.”

For six months Christie and five other sourdoughs clambered, slid, fell, and hiked through the center of the Olympic Peninsula.  Their journey began along the banks of the Elwha River near Port Angeles, ending at the wild rapids of the Quinault River, north of Grays Harbor.

Two mules and three dogs accompanied the party.  One man turned back, one dog was lost, and the two mules fell to their deaths.  The party suffered frostbite, near drowning, dysentery, and semi-starvation.  When matters appeared desperate, the bounty of the inner peninsula miraculously provided.  Christie later wrote that one night they feasted on “elk tenderloin . . . flanked by Crumback’s bread.”  Later they found a bear, drank its melted grease to relieve their dysentery spells, and gorged on river trout, salmon, fowl, berries, and legumes.

After six months the wild-looking party emerged near the Pacific coast.  Local citizens stared in amazement at the rumpled party, listening intently to their tales of adventure.  Christie wired the Press for $125 return fare from Aberdeen back to Seattle.

The Press had its’ story, and the explorers disappeared into history.  There was a strange coda: almost 50 years after the expedition, Robert L. Wood of the Mountaineers tracked down old man Christie who was living in a log cabin in Vernon, British Columbia.  The octogenarian adventurer, after a lifetime of prowling peaks and valleys throughout western lands, couldn’t remember details of the Olympic crossing – the first by a party of white men.

Christie Peak and Press Valley remain as monuments to the Christie/Press Expedition, alongside Goblins Gate, Flypaper Pass, Lunch Rocks, Pluto’s Gulch, and other lyrical monikers in one of America’s last wildernesses.

In the 1970s, after reading Robert Wood’s book, I suggested to a friend that we hike the Press Expedition trail, using notes and data described by Wood.  My experienced hiking friend, Dave Haley, drew up a day-by-day outline of our proposed trip, including appropriate trail food and equipment.

With the good wishes of friends and family, we entered the Elwha River Valley, emerging ten days later at shimmering Lake Quinault.  Our adventure, based on the raw notes and newspaper descriptions of J. H. Christie’s 1889 trek, remains the most exciting and challenging outdoor adventure of my life.

Junius Rochester
Junius Rochester, whose family has shaped the city for many generations, is an award-winning Northwest historian and author of numerous books about Seattle and other places.
Previous article
Sad Girl Rock: Soccer Mommy’s Moody Blues at the Moore
Next article
Seattle? Fashion Capital?