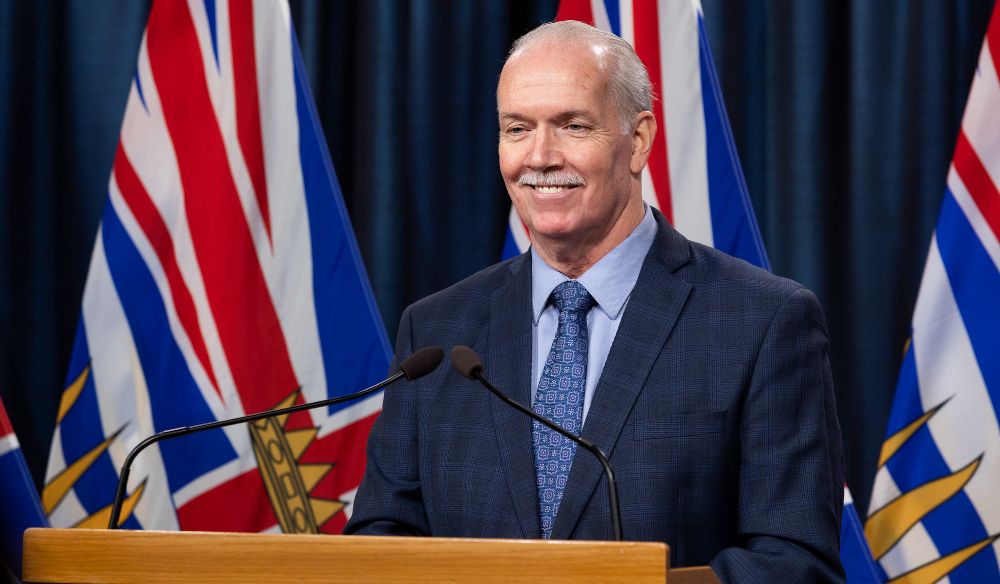 Popular British Columbia Premier John Horgan, 63, who recently underwent a second bout with cancer, announced Tuesday that he will leave office this fall after his governing New Democratic Party picks his successor.

Horgan told a news conference that his health is good “but my energy flags.”  He underwent 33 radiation treatments in the winter and spring.  He will go out after hosting Canada’s provincial premiers in Victoria next month, with a goal of pressuring Canada’s federal government into assuming a greater share of the country’s health care costs.

Horgan has been a member of the B.C. Legislature for 17 years, leader of the New Democrats for eight years, and premier for five years.  He governed with a legislative minority for three years and won a majority government in an election late in 2020.

“I have some time left in me: I feel good enough to keep contributing,” said Horgan.  The premier and his wife Ellie reached a moment of decision on a walk watching otters at play off Otter Point on Vancouver Island.  “There was a moment when we said, ‘Let’s do more of this and less of that,’” he joked.

British Columbia has endured a series of natural calamities since Horgan became premier in the spring of 2017.  Climate change has impacted the province with record forest and range fires, ranging from Telegraph Creek near the Alaska border to Kootenay National Park at the Continental Divide.  B.C. experienced record heat a year ago, with a fire devouring the town of Lytton in the Fraser Canyon.  An atmospheric river last November flooded the Fraser Valley and cut off land access to the Lower Mainland from the rest of Canada.

The province has won applause for its treatment of the COVID-19 pandemic. With daily briefings by Health Officer Dr. Bonnie Henry and B.C. Health Minister Adrian Dix, the government, at one point, restricted travel between regions of the country.  In the spring of 2020, with Puget Sound an early epicenter of coronavirus deaths, B.C. pressed the Canadian government to close the border to nonessential traffic.

Horgan has fielded a strong cabinet.  Its leading lights include Attorney General David Eby, Minister of Jobs Ravi Kahlon (a former Olympic field hockey player), and Health Minister Dix.  Under Dix, however, the New Democrats lost a 2013 provincial election they were expected to win.

The New Democrats are a big tent that includes organized labor, environmentalists, feminists, and Aboriginal First Nations.  Elements of the party are known to feud, as witnessed by sit-ins and arrests at old growth logging operations on Vancouver Island and native blockades of a gas pipeline route in northwest B.C.

The party’s base has expanded under Horgan as it has won suburban-exurban legislative seats in the Fraser River Valley, the Vancouver suburb of Richmond, and on the North Shore above Vancouver. The long-ruling (not very liberal) Liberal Party has been reduced to a largely rural base in interior British Columbia.

Horgan was a temperamental opposition leader but has proven an avuncular head of government.  With 41 seats in the Legislature, the New Democrats teamed with three Green Party lawmakers to oust the long-ruling Liberals and form a 44-member majority in the 87-member legislature.  Horgan became premier.

Horgan has one recent stumble.  The government announced it would spend nearly $800 million (Canadian) to tear down and rebuild the Royal British Columbia Museum in Victoria.  The “megaproject” generated outrage given the province’s housing, health, and education needs.  Horgan backed off, saying, ”I made the wrong call…. I’ve heard the people of British Columbia quite clearly that we were making the wrong decision at the wrong time.”

Horgan has enjoyed excellent relations with Washington Gov. Jay Inslee.  The two have dreamed of future high-speed rail service up and down the I-5 corridor.  Both leaders opposed – but could not stop – the Canadian government from a project to triple capacity of the Trans Mountain Pipeline, which will carry Alberta tar sands oil to a terminal near Burnaby, just east of Vancouver.

The project will triple oil tanker traffic through the San Juan and Gulf Islands out the Strait of Juan de Fuca.  The tanker route passes through some of the world’s most sensitive marine waters including national parks and monuments in both the U.S. and Canada.

Why did Horgan bow out?  “I am not able to make another six-year commitment to this job,” he said, meaning going through another election campaign. Serving as premier, he added, “has been the thrill of my life.”