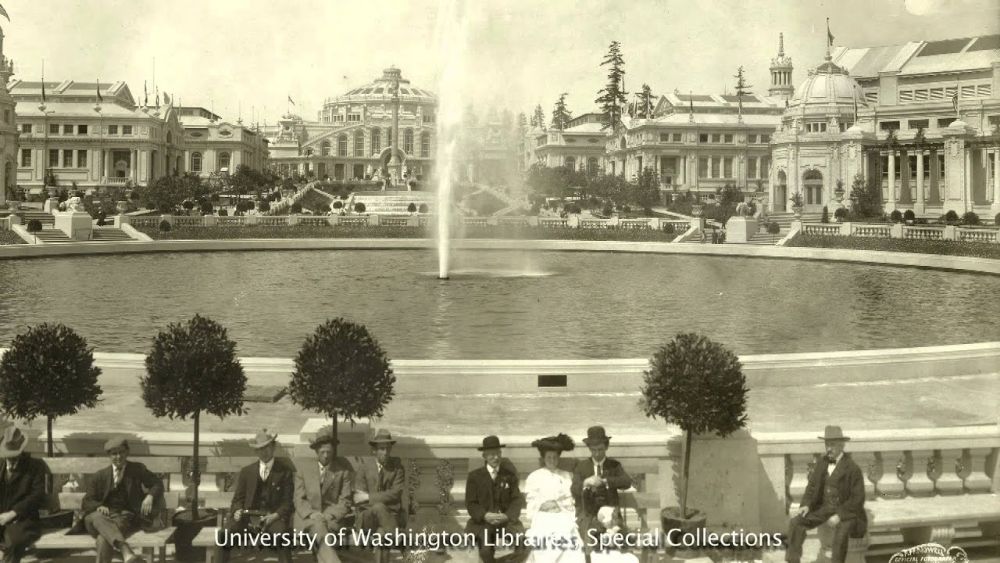 We are approaching the 60th anniversary of Century 21, the 1962 Seattle World’s Fair, so let’s take a look at its model and template, the 1909 Alaska-Yukon-Pacific (AYP) Exposition, held on what became the University of Washington campus.

John Edward “Ed” Chilberg, a prominent Seattle merchant and banker, was among the first to promote the idea of a grand “fair.”  With his handsome profile and as president of The Alaska Club (later The Arctic Club), Chilberg was chosen president of the Alaska-Yukon-Pacific Exposition.

Chilberg’s recollection of the Exposition’s origins includes a conversation he had with Godfrey Chealander, who served as the representative from Alaska at the successful 1905 Lewis & Clark Exposition in Portland, Oregon.  According to Murray Morgan’s official history of Century 21, Chilberg suggested that Chealander promote the idea of another exposition with William M. Sheffield, the Alaska Club secretary.  Apparently James A. Wood, an editor of The Seattle Times, heard about the Chealander-Sheffield conversation and added his own enthusiasm for the idea.  Wood worked for Seattle’s eccentric “Colonel” Alden J. Blethen, publisher of The Times, which signaled that the proposed celebration appeared to have powerful backing, soon joined by the Seattle Star and the rival Seattle Post-Intelligencer.

Originally referred to as the “Jubilee of Gold,” a name saluting Alaska’s key role in Seattle’s turn-of-the-century renaissance, the fair idea moved from the informal surroundings of the Alaska Club to The Seattle Chamber of Commerce’s inner sanctum.

The Chamber suggested expanding the scope to include British Columbia, Oregon, California, Japan, the Philippines, China, and, well, how about the entire Pacific Rim?  The wider focus was abetted by University of Washington Professor Edmond S. Meany, Seattle’s pre-eminent promoter, who was convinced that any celebration should take place on his home campus.  Chilberg was president-to-be of the corporation-to-be.

Chilberg and others were familiar with the role Alaska played in Puget Sound’s economic revival.  The Great Land had been purchased from the Russians in 1866 for $7,200,000 and proved to be a source of natural riches.  Over 40 Alaska “gold rushes” occurred within 50 years of the United States acquiring title, the most important strike occurring in the Klondike. Within 20 years of the Alaska purchase the value of Alaska fish totaled $29 million.  Gold and other hard metals produced a value of $615 million.  Furs came to $4.5 million, while fox farms showed a value of $7 million.  Chilberg and other Chamber boomers were direct beneficiaries of this economic stampede.

Chilberg was once quoted in a Seattle Times story: “Seattle in 1897 was a quiet little place . . . Most people walked because they couldn’t afford a 5-cent streetcar fare.  I went to San Francisco before the report of the Klondike arrived.  Before I left everything was quiet.  When I returned, the streets were crowded with people.  The Seattle I had left was gone.”

Who was Ed Chilberg?  Born in Wappello County, Iowa, January 19, 1867, he arrived in Seattle in the early 1870s as a five-year-old after a youthful stint on his father’s Skagit Valley farm.  His grandfather, C. J. Chilberg, came from Sweden to the United States in the 1840s.  Ed Chilberg briefly attended the Territorial University of Washington and then entered the printing trade as typesetter for early Seattle newspapers.

Following a brief fling as a traveling salesman, he joined members of his family in the grocery trade.  The firm of J. E. Chilberg and Company was described as “dealers in crockery, glassware, lamps” as well as selling grains, but this young businessman lost his companies in the Great Fire of 1889.

Chilberg next got into the transportation business, becoming master of the Transit, a coastal vessel that worked between Seattle and Central America.  After being shipwrecked aboard the steamship Colima on the Panamanian coast, he moved to Alaska.  He was among the first to carry news of the 1899 Nome gold strike to Dawson.

In his role as builder and realtor Chilberg participated in the erection of a Seattle landmark, the New Washington Hotel (later called the Josephinum), as well as the 14-story Alaska Building, designed by the famous St. Louis architecture firm of Eames and Young, who also designed the Josephinum.  It was Seattle’s first steel frame skyscraper.

Recognized as a man-about-town and a joiner, Chilberg served two terms as president of the Seattle Chamber of Commerce.  Chilberg was one of 20 local investors who subscribed $50,000 to enable the photographer Edward S. Curtis to defray expenses of publishing the first volumes of his famous work on North American Indians.

Local historian Archie Binns wrote: “The (A-Y-P) paid its expenses and none of the exhibiting countries withdrew or declared war on one another.  The city was also on its good behavior.  The fair was Seattle’s debut among the cities of earth, and Seattle cleaned house so thoroughly that it was never again the roaring city of gold rush days.”

In 1927 Chilberg and his wife moved to Laguna Beach, California.  He died there in 1954 at the age of 88, the only survivor from the AYP’s original board of trustees. At about this time, Seattle business and political figures were discussing the possibility of another “World’s Fair – the 1962 Century 21 extravaganza — originally meant to commemorate the 50th anniversary of the AYP.

Junius Rochester
Junius Rochester, whose family has shaped the city for many generations, is an award-winning Northwest historian and author of numerous books about Seattle and other places.
Previous article
Too Much of a Good Thing? How Over-consumption is Dulling our Happiness
Next article
Succession: Russia’s Troubled Leadership Transitions