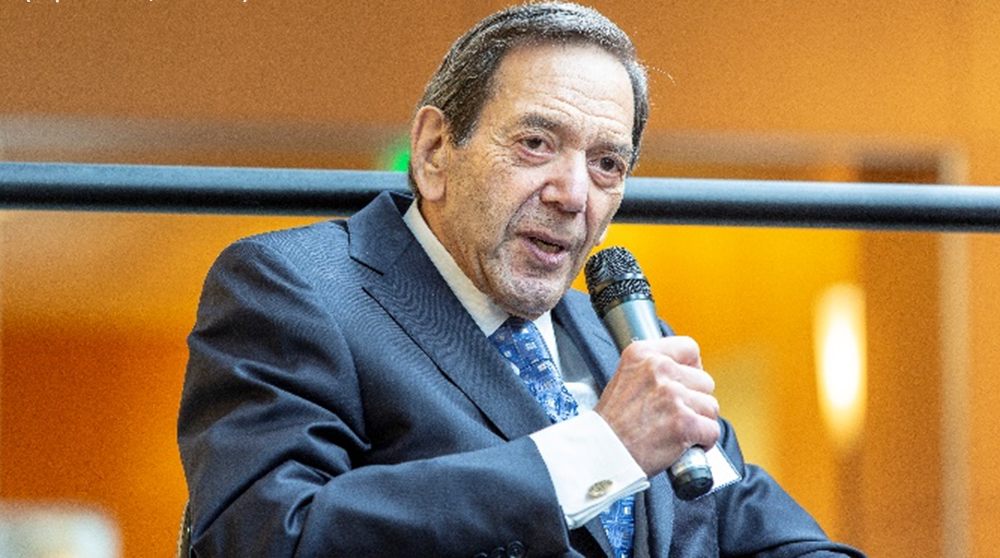 Stan Barer was a Walla Walla boy, a young Magnuson “bumblebee,” a vastly successful businessman, a rebuilder of trade between the U.S. and Peoples’ Republic of China, and benefactor to the University of Washington Law School which launched his career. Barer passed away at 82 earlier this month in the Webster Point-Laurelhurst home where he and wife Alta twice hosted Hillary Clinton, less than a mile from the UW where he served for eight years as a Regent. He fought a decade-long battle with pancreatic cancer.

Barer was a shaper, somebody who wasn’t just present at the creation but a creator, “the essence of what it is to be a public lawyer,” in words of former Washington Supreme Court Justice (and law partner) Bobbe Bridge.

The “bumblebee” was Sen. Warren Magnuson’s nickname for youthful lawyers – e.g. Barer, Jerry Grinstein, and Norm Dicks – who revitalized Maggie’s political career in the 1960s and 1970s. Barer was a counsel to the Senate Commerce Committee when it wrote the public accommodations section of the 1964 Civil Rights Act.  He was Maggie’s chief-of-staff when the committee crafted America’s basic consumer laws.

The bumblebees would go on to pull off deeds onstage and backstage.  As CEO at Delta Airlines, Grinstein would power the troubled carrier out of severe financial distress, and he would help guide REI boss Sally Jewell into the Obama Cabinet as U.S. Interior Secretary. Dicks served in Congress for 36 years, becoming the state’s master provider on the House Appropriations Committee and architect (with Maggie) of the “little amendment” that kept oil supertankers off Puget Sound. Angry oil port booster Gov. Dixy Lee Ray called Magnuson “a dictator” and aborted a handshake with Dicks at the 1978 Rose Bowl.

Barer went global. Back in Seattle as partner in the Garvey, Schubert & Barer law firm, Barer took on as client the China Ocean Shipping Co., the state steamship company, as it sought entry into U.S. markets. COSCO faced an array of legal obstacles. But a seminal 1979 legal opinion reopened U.S. ports to China-flagged ships.  As well, Barer deployed personal diplomacy: young, promising Chinese executives did stints at the law firm.

“He was  the one who really enabled the trade and commerce between the U.S. and China, and especially the Pacific Northwest,” ex-U.S. Ambassador to China (and Gov.) Gary Locke said in a UW Law School tribute to Barer. The connection stuck. It is no accident that China’s “senior leader” Deng Xiaoping began a 1979 U.S. tour in Seattle – enduring a famously awkward hug from Sen. Henry Jackson – or that President Xi with an entourage of top officials with dyed black hair touched down at Paine Field a quarter century later.

I was pressing Barer for details while covering the Deng visit, only to be distracted.  A contingent of local Maoists showed up and began noisily protesting that China’s senior leader had “sold out” the Chinese Communist Party. We started laughing and couldn’t stop: It was an only-in-Seattle experience.

The Barer business experience began in 1982 as one of eight partners setting out to buy Totem Ocean Trailer Express. Out of this purchase has grown Saltchuk, a transportation empire that is the largest privately held corporation in the state, with services ranging from tugboats (Foss Maritime) to oilfield services in Alaska, to barges in Alaska’s Cook Inlet, to shipping in the Caribbean and Bahamas. Rich Berkowitz, vice president of the Transportation Institute, describes a division of talents that grew the company:  “Mike Garvey was the financial whiz.  He would be in such ventures as K2 skis and Ste. Michelle wines. Robert McMillen ran the direct operations.  Stan dealt with policy, regulations, and labor issues.”

Stan Barer had a kindly phrase for big political contributors, “people who invest in their politics.” He was for decades a premier Democratic fundraiser. In 1980, he sought to rescue the political career of 75-year-old, diabetes-stricken Magnuson, featuring a TV spot in which slow-walking Maggie said: “The meeting doesn’t begin ‘till I get there.” He lost to Slade Gorton.

In the wake of President Carter’s “national malaise” speech of 1979, Garvey, Schubert & Barer had acquired a new partner in just-fired U.S. Transportation Secretary Brock Adams.  With Stan’s help, Adams took on and defeated Gorton in 1986. Adams’ Senate career had an ignominious ending, with charges that he sexually harassed and drugged young women. Barer became a supporter/mentor of Sen. Patty Murray, who won the seat in 1992.

Not surprisingly,  Stan Barer was bereft of friends among six new Republican members of Congress from Washington elected in 1994. Saltchuk was exposed to some danger. From Alaska trade to Puerto Rico shipping, its operations depend on the Jones Act, the 1920 law (named for Washington Sen. Wesley Jones) requiring that goods shipped between U.S. ports be transported on ships built, owned, and operated by U.S. citizens or permanent residents.

Barer organized the maritime industry to modify the anachronistic Jones Act. “It all started with Stan saying, ‘We’re behind the eight ball: We have to educate these people,’” Berkowitz recalled.  Barer took the cause for the Jones Act to Slade Gorton, a Republican who returned to the U.S. Senate in 1988. The two men achieved a peace of sorts, and the Jones Act modification was never really threatened. Of course, Barer continued to raise money for Democrats.

The Barers in 2010 underwrote the Barer Institute for Law and Global Human Services at the UW Law School. It expands on an idea first deployed during the reopening of China trade — identifying, welcoming, and mentoring emerging lawyer-leaders from around the developing world who will help set the future course for their countries.

“He would have all these young Chinese scholars over, help them get into the University of Washington, get adjusted, have them over and put them up in his house,” said Berkowitz. Twice in the past decade, Barer was recognized at Beijing’s Great Hall of the People with lifetime achievement awards for furthering U.S.-China relations.  One of his last initiatives was as founding chair of the U.S.-China Clean Energy Forum, nudging cooperation between the world’s two greatest emitters of greenhouse gases.

Stan Barer did much good and did very well.  Much of his work was under the radar, as befits somebody who began as an aide in Congress.  Warren and Jermaine Magnuson made a trip to China in the early 1970s talking of trade and getting a high-profile meeting with Premier Zhou Enlai. Meanwhile, Barer did the intricate legal work of getting China’s ships back in U.S. ports, and began the trans-Pacific networking.

Two final backstage Stan Barer anecdotes further reveal his style and effectiveness. He was sent back home by Magnuson in 1972 to take charge of George McGovern’s presidential campaign, rescuing it from local liberal activists.  Maggie was titular chair of the campaign. Tension ensued, especially when Stan caught young campaign staff (myself included) smoking marijuana on the roof of headquarters. “George McGovern told me I could fire every one of you,” Barer told us.

In another episode that year, Stan with Maggie accomplished a secular miracle.  They somehow persuaded a grumpy Sen. Henry Jackson to introduce his peacenik archrival George McGovern to a Seattle Center Arena rally. Never to be forgotten — the sight of Scoop thrusting Lonesome George’s arm into the air.

Joel Connelly
I worked for Seattle Post-Intelligencer from 1973 until it ceased print publication in 2009, and SeattlePI.com from 2009 to 6/30/2020. During that time, I wrote about 9 presidential races, 11 Canadian and British Columbia elections‎, four doomed WPPSS nuclear plants, six Washington wilderness battles, creation of two national Monuments (Hanford Reach and San Juan Islands), a 104 million acre Alaska Lands Act, plus the Columbia Gorge National Scenic Area.
Previous article
Galvanized: When Seattle’s Civic Institutions Made Us Better
Next article
Hang Tight: The Omicron Tsunami is Here