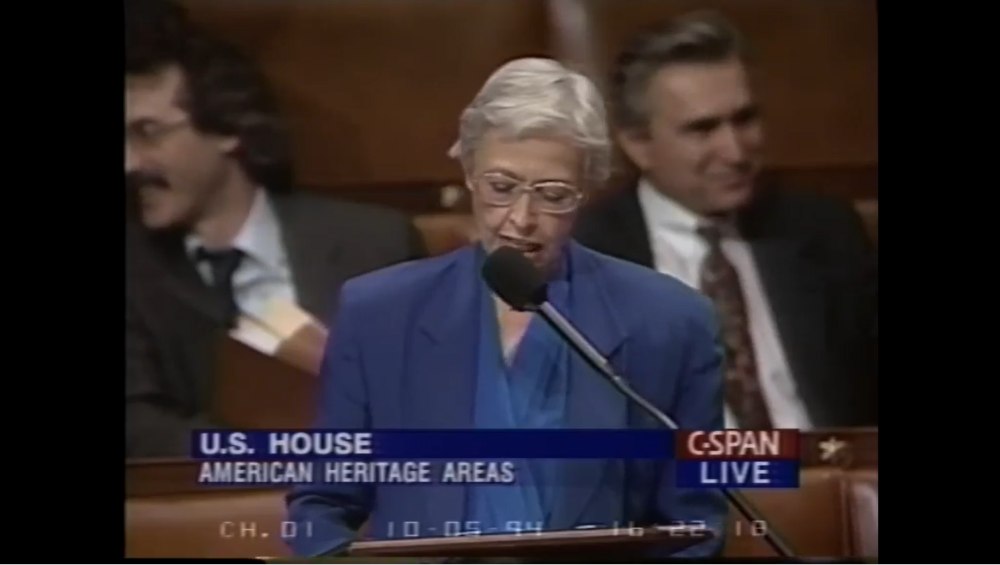 A Tribute to Congresswoman Jolene Unsoeld, Dead at 89, and her ‘Life of Wild Adventure’

Former U.S. Rep. Jolene Unsoeld, who died at home Monday at the age of 89, was an individual of boundless energy and enthusiasm. My visual image, from covering her, was of Unsoeld running down the halls in Congress, usually late for a meeting, with a big bag of working papers slung over her shoulder. A poster in the Unsoeld Olympia home summed up a life forever on the move: “A ship in a harbor is safe. But that’s not what ships are for.”

When young, Jolene was the first woman (with husband Willi) to scale the north face of the Grand Teton in Wyoming.  She would later, as a self-described citizen meddler, help pass the state’s pioneering Public Disclosure Act, still in use by AG Bob Ferguson as a weapon against money laundering by Tim Eyman and the Grocery Manufacturers Assn.

She endured tragedy, the death of daughter Devi high on slopes of Nanda Devi, the 25,643-foot Himalayan peak in northern India for which she was named, and later Willi’s death in an avalanche while leading Evergreen State College students on a climb of Mt. Rainier.

She would serve six years in Congress.  Unsoeld refused to be addressed by her title and insisted on being called Jolene.  She declined to be driven, saying being at the wheel gave her time to think. A common sight, in Southwest Washington’s 3rd District, was Unsoeld driving up to a meeting with her top aide Dan Evans (not the governor) uncomfortable in the passenger seat.

“She was quirky in kind of an appealing way,” said ex-aide Paul Elliott. “Just as we’ve long heard of authors who insisted on using a typewriter, Jolene insisted on using the DOS operating system, which I think was obsolete already when she was in Congress.  She used it to write her autobiography a few years ago.”

Nobody questioned her determination. “A progressive before we used the term, an icon to Democratic women . . .  Lucky to have her as a mentor and role model,” State Democratic Chair Tina Podlodowski Tweeted. “Rest in power, the incomparable Jolene Unsoeld.”

Unsoeld had just been elected to Congress in 1988, by a 618-vote margin, when she arrived in D.C., to set up her office and get committee assignments. I came calling as correspondent with the Seattle Post-Intelligencer, having been asked to pick up a six-pack of beer at a nearby store. Recycling had come to Washington, but not Washington, D.C. I finished a brewski and went to chuck the can in a waste basket. ‘Felt a vise-like grip on my wrist. Rep.-elect Unsoeld confiscated the beer can and set it in a special basket for recycling.

She had her start in the 1970s as a League of Women Voters activist, helping draft the Public Disclosure Act. Using information submitted to the newly created Public Disclosure Commission, Unsoeld published a small book: “Who Gave? Who Got? How Much?” Numerous investigative stories on money in politics came from its pages.

The life of a meddler was disrupted by twin tragedies, laid out in Unsoeld’s autobiography: “Wild Adventures We Have Known: My Life with Willi Unsoeld.” Willi (Bill to Jolene) had come home to teach at Evergreen. He had made mountaineering history in 1963 with Tom Hornbein by climbing the West Ridge of Mt. Everest and traversing the world’s highest peak. He lost nine toes to frostbite after a bivouac at 27,900 feet.

Thirteen years later, at a 23,000-foot camp, Devi Unsoeld told her father: “I think I am going to die.” She was gone in five minutes, her body in Willi’s words “committed to the snows.” Jolene Unsoeld grieved in public as she organized a “Memorable Celebration for Devi” at Evergreen. Three years later, after an avalanche killed Willi and student Jane Diepenbrook – the other students made it down to Camp Muir in a white-out – it was time for another “Memorable Celebration” at Evergreen.

The ship would not stay in harbor: At Willi’s memorial, Jolene spoke to the P-I’s Mike Layton about someday running for office.  She did, was elected to the Legislature, where she championed a tax on hazardous waste that would fund a cleanup plan. She won a battle of dueling state ballot initiatives against a weaker industry-backed plan.

Unsoeld spent her Capitol Hill tenure in harm’s way.  She quickly signed on as sponsor of an LGBTQ civil rights bill. She defied the fishing industry and cut her teeth on the issue of banning driftnet fishing, in which nets as long as 30 miles killed millions of birds and fish.  Serving a timber-dependent district, she refused to demagogue the spotted owl ruling in which U.S. District Judge Bill Dwyer ordered a halt to liquidation of old-growth forests on federal lands.

“Timber workers in her district were mad as hell over set asides to protect the Northern Spotted Owl. Rush Limbaugh branded her a ‘feminazi.’ Gun control advocates called her a flip flopper. It was the spring of 1994 and Congresswoman Jolene Unsoeld of Olympia was girding for the political fight of her life,” Washington’s official historian John Hughes wrote of Unsoeld’s last campaign.

Unsoeld was one of 30 women of the 435-member House when she was elected. She was not a practitioner of identity politics, but fierce in her feminist convictions. She had a memorable set-to on the House floor with Rep. Dick Armey, R-Texas, who would become House Majority Leader. In an anti-abortion speech, he mocked women for “self-indulgent conduct” and being “damned careless with their bodies.”

Unsoeld shot back: “Reproductive health is at the very core of a woman’s existence. If you want to be brutally frank, what it compares with is if you had health care plans that did not cover any illness related to testicles.  I think the women of this country are being tolerant enough to allow you men to vote on this.”

Years later, in the autobiography, she shared an intimate story. Already parents of four, Jolene and Willi discovered she was pregnant.  Abortion was then illegal. She flew to Japan to end her pregnancy. In Tokyo on business, her conservative father drove her to the clinic “and was there for me unconditionally when I needed him.”

Jolene Unsoeld was a famous night owl, at her computer into the wee hours of the morning.   Unsoeld was visibly worn down by her service in Congress. The job involved innumerable early morning breakfasts. She had to fight to defend her seat. Once, a shipment of salmon for a fundraiser arrived late on a Friday, was left outside Unsoeld’s office where it stayed for a long weekend. The Longworth Building needed to be fumigated.

Unsoeld would be buffeted from right and left in the “Gingrich revolution” election of 1994, in which 54 Democrats lost their House seats. A gun control candidate drew off votes: Unsoeld was an unlikely 2nd Amendment defender. The victor was State Rep. Linda Smith, a dynamo of the Republican right and product of Phyllis Schlafly’s Eagle Forum.

Public service for Jolene Unsoeld did not end with the 1994 election. Back home, Gov. Mike Lowry named her to the Washington Fish and Wildlife Commission, to which she was later reappointed by Gov. Gary Locke. She made enemies by calling for restrictions on fishing to restore depleted stocks. Ultimately, a coalition of the State Senate’s Republicans and old-boy Democrats refused to confirm her appointment.

The final act was an autobiography, of life growing up in a conservative Oregon family, meeting and marrying “Bill,” life with babies while he worked as a climbing guide in the Tetons, a sojourn in Nepal when Willi headed the Peace Corps there, and marital tensions surrounding his participation in the 1963 American expedition on Everest.

Unsoeld was unsparing about pains in her life but related an extraordinary moment when the pain went away: “It was several years before some sort of transition took place where that vision of beauty no longer overwhelmed me with grief. And then, one day, I was driving down I-5 and received a blast of beauty from a sunset. There was no more pain. I could feel Bill and Devi in the car with me. We were all together again.”

Each year, on the anniversary of the West Ridge climb, Unsoeld and Tom Hornbein would talk on the phone. Deep in her 80s, she would conclude her autobiography with the words, “I am ready for my next ‘Wild Adventure.’” She died a day short of her 90th birthday.