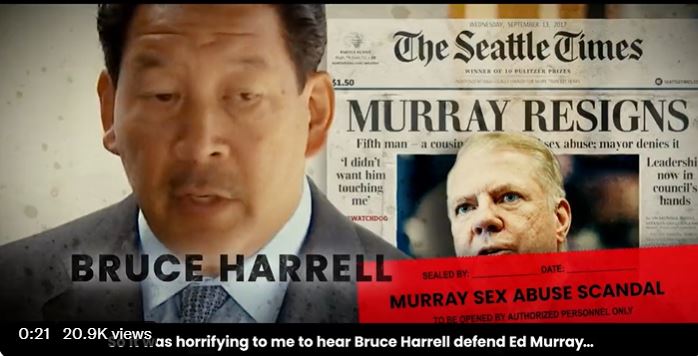 An initial riveting response to Lorena Gonzalez’ attack TV ad, the one accusing Bruce Harrell of defending those accused of sexual assault, was delivered hours after it aired by attorney and longtime NAACP leader James Bible. Bible is a 20-year friend of Gonzalez, went to law school with her, and had given $500 to the Gonzalez campaign.

“Lorena, I want my $500 dollars back: You owe Bruce an apology. Your most recent attack ad is shameful,” Bible said in a Facebook post on Saturday morning.  He decried Gonzalez for making an “absolutely false claim.” The post drew 395 likes, 295 comments, and 89 shares.

The blowback continued as African-American leaders appeared with Harrell on a Zoom press conference, 400 community members signed a letter asking Gonzalez’ campaign to take down the ad, with 200 Asian American supporters of Harrell condemning the commercial as false and racist.

On Monday, the TV spot was withdrawn. In a video to her supporters, Gonzalez pressed the case that Harrell has a “troubling history” of defending those credibly accused of sexual assault. Her evidence? Harrell refused to join initial calls for Seattle Mayor Ed Murray to resign after three-decade-old assault accusations surfaced in The Seattle Times.

Gonzalez is a ballerina when it comes to dancing around accountability. The only regret to which she fessed up was the TV ad using a white sexual assault survivor to denounce Harrell, who is of African American and Japanese American lineage.  Said Gonzalez: “I am sorry we did not work harder to center the voice of a sexual assault survivor from our community of color who was also willing to tell their story.”

When a campaign grows desperate, the inclination is to get dirty.  Sometimes it works. The legendary image (evoked by Bible) is the glowering black face of Willie Horton, the Massachusetts murderer whose crime spree while on furlough was used to erase Democrat Gov. Michael Dukakis’ double-digit lead and send George H.W. Bush on a path to the presidency. In this state, Sen. Slade Gorton lost in his 1986 reelection bid in part due to an ad that he wanted to turn a mothballed Hanford nuclear power plant into a “bomb factory.”

Often, however, the “bomb plays” in politics explode in the bomb thrower’s face. The hit pieces often aren’t believable and reflect adversely on a candidate’s judgement.  Our last Republican governor, John Spellman, tried to depict opponent Booth Gardner as a crony/tool of “big labor bosses.” The state laughed, since Booth was a gentle Weyerhaeuser heir with a voice that sounded like Elmer Fudd on helium. Besides, the Teamsters Union had endorsed Spellman.

Or there are racial implications. Endangered King County Council incumbent Kathy Lambert sent out a mailer in September showing challenger Sarah Perry as a “socialist puppet” on a string controlled by colleague Girmay Zahilay, the lone African American on the King County Council.  It said Perry would answer to “Seattle socialist leaders.” Gazing on and grinning were Vice President Kamala Harris and Sen. Bernie Sanders.

The reaction followed a pattern.  The Lambert campaign initially stood by its mailer.  Almost immediately, however, The Times rescinded its Lambert endorsement and announced its support for Perry. The Seattle-King County Board of Realtors also bailed on the incumbent. Zahilay responded with cool understatement, telling KING 5 News: “It’s not a new strategy to point to the only Black elected official with a foreign sounding name to fear monger.”

Lambert was apologizing within a couple of days, with her own understatement: “This message is certainly not what was intended.” In a variation of the old “some of my best friends” line, Lambert added: “I do a lot of work in Africa, so if I had something against him [Zahilay] because of his color, I wouldn’t be doing the work I do in Africa.” Lambert also fired her campaign consultant.

Attempting to define Bruce Harrell negatively has been a daunting task for the Gonzalez campaign and the $996,000 “independent” PAC funded by her labor supporters. They’ve polled copiously but stumbled repeatedly.

If you missed the movie Twister, you can get the same pleasure by following the twists of the anti-Harrell campaign.  An initial PAC-funded TV spot tried to link Harrell, a Democrat, to a big Trump contributor and the January 6 insurrection at the U.S. Capitol.  The PAC’s second spot depicted him as “a corporate lawyer” overcharging consumers.  The campaign’s hit piece on sexual assault will be replaced by a TV spot blaming Seattle’s crisis of homelessness on “large corporations” who support Harrell and have “refused to pay their fair share in taxes.”

The difficulties suggest the insularity of Seattle’s activist left, which reinforces itself on Twitter.  The Gonzalez campaign seems to believe the public agrees with its edgy bash-business themes. Nor does it seem to fathom the unpopularity of a left-activist Seattle City Council, of which Gonzalez is the president.

The Harrell campaign has played on their candidate’s likeable nature, depicting him as salt-of-the-earth Seattle, the product of Garfield High School, the Husky linebacker who opted for law school instead of the National Football League, an avuncular and popular community figure.  As Bible noted – he endorsed Harrell only last Saturday – “Bruce has been a tremendous mentor, role model, and friend for life. He has set the example for so many people.”

Which is not to say Bruce Harrell is without flaws.  But salvoes from Gonzalez’ campaign, its supporting PAC, and its surrogates have bounced off him.  The petty stuff also hasn’t made much impression. It’s unlikely many folks will vote against him because Harrell was spotted mask-less at a China City fundraiser, or when his campaign vetoed Gonzalez’s endorser/apologist Erica C. Barnett as moderator at a Queen Anne candidate forum.

Of course, you can’t forecast the future, and there are still a lot of undecided voters.  Still, if Bruce Harrell is elected Mayor next Tuesday, and Sarah Perry becomes the seventh Democrat on our officially non-partisan King County Council, one aspect of their electoral excess will be the waywardness of the mud thrown at them.

Joel Connelly
I worked for Seattle Post-Intelligencer from 1973 until it ceased print publication in 2009, and SeattlePI.com from 2009 to 6/30/2020. During that time, I wrote about 9 presidential races, 11 Canadian and British Columbia elections‎, four doomed WPPSS nuclear plants, six Washington wilderness battles, creation of two national Monuments (Hanford Reach and San Juan Islands), a 104 million acre Alaska Lands Act, plus the Columbia Gorge National Scenic Area.
Previous article
The Billionaire Tax: Good Idea? Could It Happen?
Next article
Could Nick Kristof Be Oregon’s Next Governor?