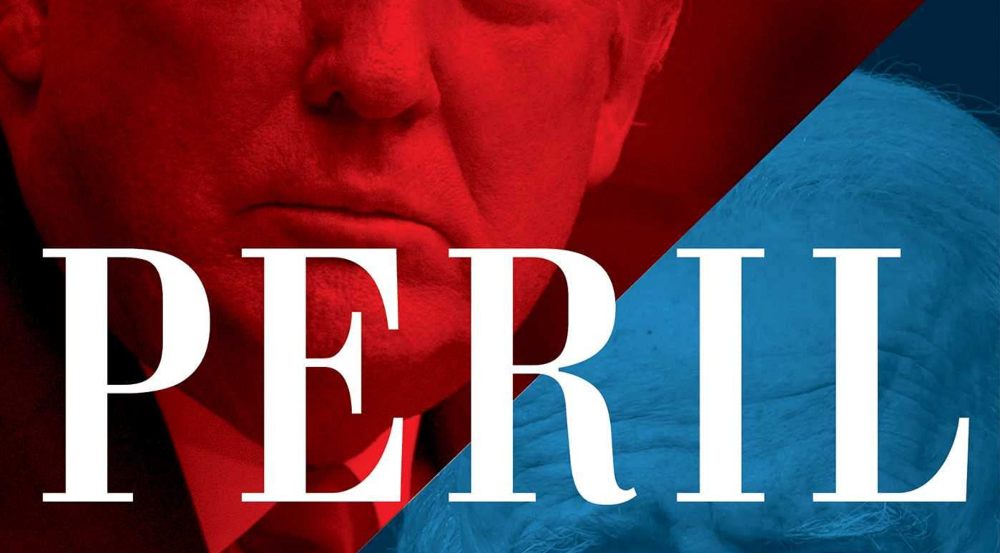 How America Survived the ‘Peril’ of an Enraged Donald Trump

One measure of the strength of America is that our nation has endured and survived awful Presidents. Bob Woodward has been describing these scary episodes up close since “The Final Days” depicted a drunken, distraught Richard Nixon roaming the White House and conversing with portraits of his predecessors.

The latest tome is “Peril,” written with Washington Post colleague Robert Costa. Its subject is a maladroit coup attempt to stay in power by a POTUS who lost his reelection bid by the margin of seven million votes.  The book moves on to describe a Donald Trump bent on vengeance, with its title “Peril” summing up the prospect of an unhinged man returning to power.

As with all of Woodward’s authored and co-authored books, “Peril” is not history.  It is material for history. The book is episodic, focused on key moments, and featuring deep-background, anonymous interviews to serve up direct quotes – many using the “f” word – ranging from Oval Office meetings to Trump-retaliation talk on the golf course.

A central figure, and obvious deep background source, was Joint Chiefs of Staff Chairman Gen. Mark Milley. While our Supreme Court justices seem driven by the doctrine of “Original Intent,” our country’s founders could not have understood the war-making powers of a 21st century President.  Under Nixon, White House Chief-of-Staff Alexander Haig acted to block irrational orders by the 37th President.  After all, Nixon was spending hours listening to the soundtrack of “Victory at Sea.” Milley also stepped up, even making a reassurance phone call to his counterpart in Beijing. He has been bitterly attacked by Republicans in Congress for backstopping the Republic.

With narcissist Trump, everything is about Trump. When VP Mike Pence refused to block certification of electoral votes, Trump tells his loyal Vice President, “I don’t want to be your friend anymore if you don’t do this.”  He has since raged at Pence in post-election speeches. To then-House Speaker Paul Ryan, who guided the Trump tax cut through Congress, Trump shouts: “You’re not in the foxhole with me.”

With his office vandalized and its windows broken, House Republican Leader Kevin McCarthy reaches Trump on January 6, calling on him to stop the U.S. Capitol insurrection. Trump tells him: “Well, Kevin, I guess these people (rioters) are more upset about the election than  you are.” Of Senate GOP Leader Mitch McConnell, Trump declares: “I know McConnell hates me.” After the election, when McCarthy pays him a visit at Mar-a-lago, Trump sneers, “Kevin came down to kiss my ass and wants my help to win the House back.”

In a wider sense, Trump represents the darker side of the American dream. One revealing episode from “Peril” has gone little noticed. Rep. Adam Smith, D-Wash., chair of the House Armed Services Committee, was on a flight home to Seattle after 1/06.  He went unnoticed by about 100 Trump supporters. They were deeply angry that the riot had not overturned the election result. In words from “Peril”: “Ugly talk about conspiracies to steal the election from Trump filled the plane.  So did chatter about the QAnon group, which passengers said with confidence was a bulwark against a cabal of cannibalistic, anti-Trump pedophiles who worship Satan and run a global child-sex-trafficking ring.”

Rep. Smith learned the phrase “6MWE,” explained to him as “6 million weren’t enough,” a reference to Nazi extermination of Europe’s Jews. Anti-Semitic talk on the plane “continued unabated.” The experience was jarring, like the riot itself. Smith was convinced many on this flight, and at the Capitol, “absolutely tried to overturn the election of a legitimately elected President. No doubt.”

“Peril” also discusses an early perilous call by Joe Biden, the decision for a total pullout of U.S. forces from Afghanistan.  The 46th president, in national politics for half-a-century, has a long memory and grudges of his own.  As Vice President, he reviewed Barack Obama’s 2010 decision for a “surge” in which 30,000 additional troops were sent to Kabul. Biden became convinced that the rookie President was “rolled” by entrenched national security leaders, including Afghanistan commander Gen. Stanley McChrystal, who warned of “mission failure” if Obama didn’t give him tens of thousands more troops.

The Veep opposed the buildup. As Woodward and Costa report: “Biden told Obama that the military was selling him ‘bullshit’ on the war. Biden knew from his years in the Senate the military was burying Obama in jargon.” Biden developed an abiding anger at what he called “five blocks of granite” urging the surge:  They included Secretary of State Hillary Clinton, Secretary of Defense Robert Gates, JCS Chairman Gen. Michael Mullen, McChrystal, and Gen. David Petraeus.

Biden had enough a decade later when military advisers urged a continued presence in Afghanistan. Once again, Woodward delivers a scene: “Biden was standing by the Resolute Desk. [Secretary of State] Blinken could see the president was still carrying the burden of the decision. Presidents lived in the world of the suboptimal. Standing here alone, the President lightly tapped the desk. ‘Yeah,’ said Biden, ‘the buck really does stop here.’”

Fascinating stuff, but “Peril” also shows the downside of its journalistic techniques. The rule around D.C. has been that you can spin Woodward’s books by talking to him and look awful bad if you keep your counsel.  A pair of ogres from the Trump presidency – Attorney General William Barr and South Carolina Sen. Lindsey Graham – have used the book to rehabilitate themselves.

Once a bitter critic turned Trump friend, Graham is depicted as talking truth to power: “You got caught up in losing the election you thought you won,” he tells Trump. “I get that. But you asked more of Mike Pence than he could deliver. You said things about him that were unfair.” This, mind you, from a man who was making phone calls to the Georgia Secretary of State’s office as part of Trump’s bid to overturn Biden’s victory in the Peachtree State.”

AG Barr worked tirelessly to justify and expand Trump’s use of presidential powers, and used a dishonest summary to defuse findings of Robert Mueller’s investigation into Russian interference in the 2016 election and Trump’s obstruction of the probe.  Yet, “Peril” allows Barr to come across as a truth-teller who resisted Trump’s bid to use the Justice Department to bolster the Big Lie of election fraud.

Barr tells Trump that Justice has found “so far, nothing” to back the President’s claims. Trump explodes, “You must have said that because you hate Trump, you must really hate Trump.”

Barr is the picture of a calm mandarin. “No, Mr. President, I don’t hate you. I think you know that at some significant personal sacrifice to myself, I came in to help this administration and I’ve tried to serve it honorably.”  He goes on to say of Trump’s legal team, “Every self-respecting lawyer in the country has run for the hills. Your team is a bunch of clowns.”

The Woodward-Costa book is meant to scare. The Republic was in peril as Trump and his minions deployed pressure tactics to overturn very close election results.  The coup was foiled by the ineptitude of its plotters, by honest judges across the country, and by the integrity of a relative few in the corridors of power.

The truly scary part is that so many Republicans buy into the Big Lie, and that such GOP leaders as Lindsey Graham and Kevin McCarthy continue pandering to Trump. “I think he’s redeemable,” says Graham. “I think he’s got magic and I think he’s got darkness.” Besides, “Trump was fun. His enemies just did not see the fun.”

What fun, in what country – given what our country has been through over the past five years? Trump wants back in, mainly to get even. The Democrats must govern competently.  If they follow tradition and form another circular firing squad, America will be the casualty.