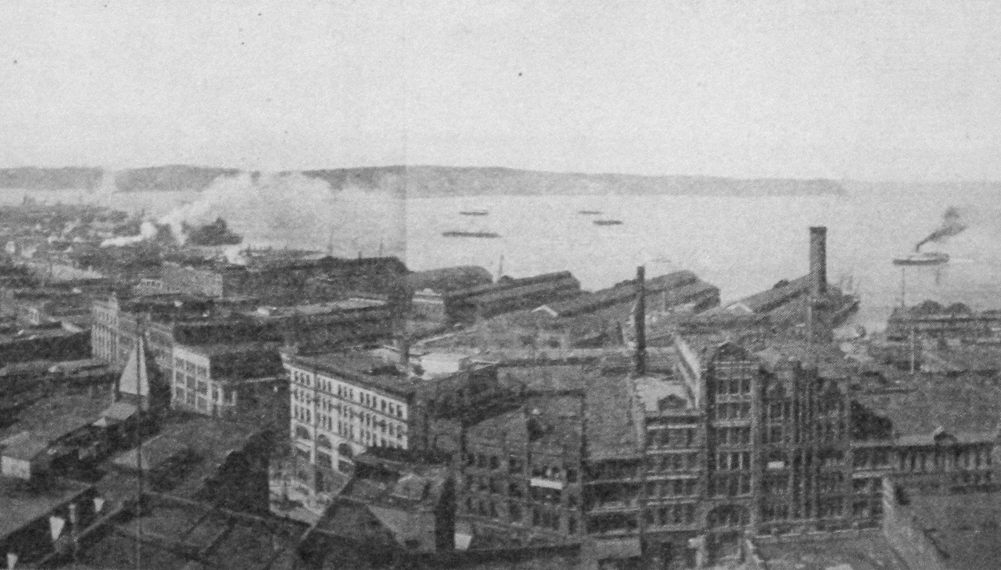 Henry Broderick, a leading figure in Seattle’s boom-town real estate, was an emblematic person in the era when Seattle was a bursting land-of-plenty. As the son of an Irish immigrant, Broderick took full advantage of his adopted town, eventually heading the city’s largest commercial real estate company.

HB, as he was known, grew up in Minneapolis, where his father worked construction after arriving from Ireland in the 1860s. He was the youngest of 10 children, growing up in a home without plumbing or electricity and heated by a single kitchen stove. As he wrote, he grew up “in an atmosphere of discipline with little chance of self-indulgence.” He hung out in the public library, where he read about a boomtown named Seattle.

Intrigued, he wrote a letter to Alden J. Blethen, owner/publisher of The Seattle Times, asking about work in the city. Blethen was not encouraging, but HB packed up anyway and arrived in 1901 to find a town with cable cars (none in flat Minneapolis), a buzzing waterfront, lots of dance halls, and gambling on a large scale. He decided to get into real estate, fueled by the funds pouring in from the Alaska Gold Rush and the arrival of railroads.

The Union Pacific, led by E.H. Harriman, and the Milwaukee Road, led by James J. Hill, were in heavy competition to build trackage into the busy port city. That meant lands near Fourth and Fifth Avenues and Jackson and King Streets were in robust play. HB, an inveterate “joiner,” knew the properties, the owners, and the market, so he was soon a key figure in the real estate boom.

The city was then gilded with “entertainments” and impresarios such as Alexander Pantages, who was building a national vaudeville chain, and John Considine, assembling the Orpheum circuit. Sarah Bernhardt came to town as did Mrs. Patrick Campbell, Billie Burke, John Barrymore, and George M. Cohan. The Grand Opera House on Cherry Street offered performances almost nightly. Henry and “Mrs. B” rarely missed a show, and he grew into an arts patron and a lifetime sponsor of musical groups and artists.

Before Prohibition, colorful characters, saloons, and eateries formed social centers for a largely male population. Among HB’s favorites: Jensen’s Grove on Eastlake Ave., Billy Sutherland’s in the Alaska Building, Billy the Mug’s on Second Ave and Washington St. (a den for loggers), The Palace (offering the innovation of pool tables and jars of garter snakes), and a meeting place for lawyers and business executives called the Horseshoe Saloon at First and Cherry.

In his later years, HB authored tracts and brief Seattle histories, including a Christmas book each year (now collector’s items). He became active in the Catholic Church, a donor to Seattle University, and remained a master of the Chinook jargon. His home in the Denny-Blaine neighborhood (1717 39th Ave.) had a ballroom on the second floor and a large library he shared with all kinds of readers. He hosted musicals and meetings at his home, became a talented harmonica player, provided scholarships to talented young artists, and served as a (very young) board member for the 1909 Alaska-Yukon-Pacific Exposition and the 1962 Century 21 World’s Fair.

HB died at the age of 94 in 1975. This immigrant story had produced a civic pillar of the young city, one who took pride in “neighborliness” as a distinctively Seattle way of life.

Junius Rochester
Junius Rochester, whose family has shaped the city for many generations, is an award-winning Northwest historian and author of numerous books about Seattle and other places.
Previous article
Am I suffering from “Biden Bias”?
Next article
Coffee Bean Prices have Doubled. They may Double Again – What Gives?