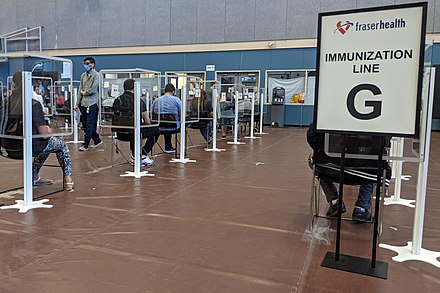 British Columbia Mandates Proof Of Vaccination for Most Indoor Activities

Starting Sept. 13, residents of British Columbia must show “B.C. Vaccine cards,” if they want to attend a movie or indoor activity, work out at a fitness center, eat indoors or on the patio of a restaurant, live in student housing, go to dance or the symphony, or gamble away Loonies at a casino.

As Gov. Inslee’s indoor mask requirement took effect in Washington, the British Columbia government responded to a COVID-19 upsurge by requiring proof of vaccination for a wide range of optional activities. One other Canadian province, Quebec, has a similar requirement to take effect on Sept. 1.

“Vaccines are our ticket to putting this pandemic behind us. So I call on all eligible British Columbians to roll up their sleeves to stop the spread, and help protect themselves, people they love and the community,” said B.C. Premier John Horgan.

British Columbia has made strides in vaccinating its citizenry: 83 percent of those over the age of 12 have received at least one dose, with 74 percent fully vaccinated.  But 776,000 people in the province have yet to get a needle in the arm.

In turn, the un-vaccinated account for 90 percent of new COVID-19 cases, and 93 percent of those requiring hospitalization.  The rate of infection in B.C. is 28 per 100,000 for the un-vaccinated, just two per 100,000 for those who have received at least one shot. “Your risk (of catching or spreading COVID-19) is 10 times higher if you have not been vaccinated,” said Dr. Bonnie Henry, B.C. Health Officer. “These numbers are a stark reminder of why vaccines are important,” Horgan added.

British Columbia was suffering early this year, with more than 1,000 new cases each day.  The provincial government restricted travel within the province to geographic zones in order to curtail the spread.  Vaccination caused a dramatic drop, to just 74 daily cases a month ago.

Since then, the Delta variant has brought a new surge. The province reported Monday a total of 1,711 new cases since Friday, with 133 COVID-19 victims hospitalized and 80 in intensive care.  There were 16 deaths from COVID-19 over the weekend. Health officials predict a return to 1,000 new cases per day, although serious effects are far less among those who have been vaccinated.

Dr. Henry described the vaccine requirements as “a temporary measure that is getting us through a risky period.” Visitors from outside British Columbia will fall under the requirement, and as of Oct. 13, two doses of vaccine will be required.

The vaccine requirement will not apply to grocery stores, retail shopping centers, and places of worship in the province. Nor will it apply to children under 12 if they are accompanied by a vaccinated adult. The province will not recognize exemptions claimed on religious grounds.

In a country established on the principle of “peace, order, and good government,” Canada has seen a limited number of anti-vaccine protests.  Being vaccinated has generally been treated as a civic duty.  In Canada’s current election campaign, Conservative Party leader Erin O’Toole has been challenged to say whether all of his parliamentary candidates have been vaccinated.

One town that has seen conflict is Nelson in southern British Columbia, which has a relatively low (72 percent) vaccination rate.  Mayor John Dooley, in a CBC interview, pointed a finger at those who haven’t received the needle saying, “I honestly believe that the [vaccine] passport is the way forward because it’s unfair and disrespectful for people who are not vaccinated – that have no intention of being vaccinated – to hold the rest of the community at ransom.”

The vaccine mandate will be reviewed later this year.

Joel Connelly
I worked for Seattle Post-Intelligencer from 1973 until it ceased print publication in 2009, and SeattlePI.com from 2009 to 6/30/2020. During that time, I wrote about 9 presidential races, 11 Canadian and British Columbia elections‎, four doomed WPPSS nuclear plants, six Washington wilderness battles, creation of two national Monuments (Hanford Reach and San Juan Islands), a 104 million acre Alaska Lands Act, plus the Columbia Gorge National Scenic Area.
Previous article
Everything You Need to Know About Schools, Students and COVID Right Now
Next article
Wealth Disparity is a Growing (and Dangerous) Threat to Democracy