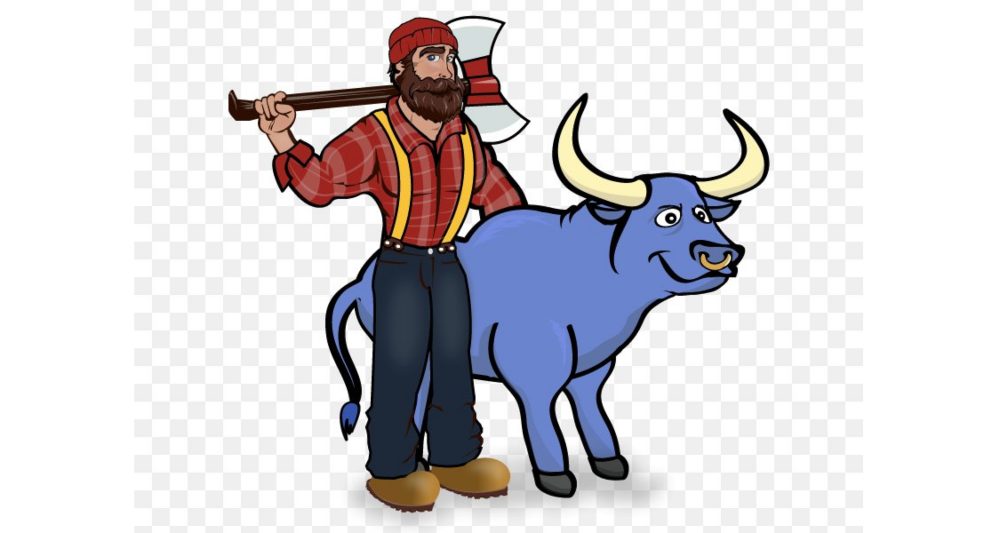 The Pacific Northwest Through the Eyes of Paul Bunyan

James Stevens scanned the natural wonders of the Pacific Northwest and saw every dramatic contour against the sky through the eyes of a mythical giant lumberman named Paul Bunyan.

Stevens’ last years were spent in a home on Randolph Place in Seattle’s Madrona neighborhood.  His lair overlooked Mt. Rainier, Lake Washington, the Cascade Mountain Range, and forests undulating across Medina (now broken up by upscale homes).  These monuments fit the adventures and travels of Paul Bunyan and his companions Babe the Blue Ox, the Big Swede, Johnny Inkslinger, Hot Biscuit Slim and Cream Puff Fatty.

Washington’s James Stevens and Oregon’s H.L. Davis were outstanding interpreters of our Far Corner, among a talented local contingent of historians and novelists such as Stewart Holbrook, Nard Jones, James G. Swan, Murray Morgan, Ruby El Hult, and more.  But Stevens was a leader in catching the whimsy, humor and folklore of the Pacific Northwest, and Paul Bunyan was his muse.

Iowa-born Stevens moved with his family to Idaho where he learned to wrangle horses and work in the woods. After serving in the Army during the Great War, he worked in Oregon and Washington logging camps.  During those youthful outdoor years, he listened to wild bunkhouse tales, and began to write a few stories, several of which were published in H.L. Mencken’s “American Mercury” magazine.  In 1925, his first book, “Paul Bunyan,” caused a stir and set him on a course of describing and defending men and women who lived in or near the nation’s great stands of timber.

Dating to Homeric days, an oral tradition marked stories, fables and heroes.  Paul Bunyan, of Franco-Canadian roots, emerged from that tradition.  As the forests were depleted in Eastern Canada and state of Maine, loggers – and their story-telling – moved westward.  James Stevens was receptive to this change, and saw Paul Bunyan as his own.

Great fables arose from Paul Bunyan’s exploits, such as creation of the Grand Canyon by Paul pulling his ax behind him, and the creation of Mount Hood by Bunyan placing stones on his campfire.  Other stories depicted Babe the Blue imbibing a vat of Epsom salts in “seven gulps,” along with “barrels of pills” and “cartons of powders” while recovering from illness.  Another tall tale described the thousands of whales that used to frolic in the Columbia River, later replaced by smaller fish known as our migrating salmon (Stevens also referred to Oregon’s Coos Bay as a “whale corral”).  According to Paul Bunyan even our region’s meandering, wild Snake River was inadvertently created by Babe the Blue Ox staggering through the mountains and deserts of the eastern landscape.

James Stevens playfully ignored science’s description of the great Vashon Glacier receding 14,000 years ago, leaving behind boulders, silt, ponds and lakes, including the Salish Sea that washes around our precious San Juan Islands.  Instead, he turned the story over to Paul Bunyan and the strange illness of Babe the Blue Ox:

“ . . . Babe’s unfinished grave became the islands and waters of Puget
Sound.  The Cascade Mountains of Washington were made from the
dirt thrown by the loggers and Paul Bunyan when they began to dig
the grave, and a bitter dispute still rages regarding the name for the
loftiest peak.  The loggers and the people of Seattle call it Mt. Bunyan,
the people of Tacoma and the Indians call it Mt. Tacoma, and the
geographers and tourists have named it Mt. Rainier, after the weather,
which is rainier there than in any other part of the country.
So say the old loggers.
And loggers are truthful men.”

Junius Rochester
Junius Rochester, whose family has shaped the city for many generations, is an award-winning Northwest historian and author of numerous books about Seattle and other places.
Previous article
Ho-Hum: Undercounting the ‘Insurgent Status Quo’
Next article
Primary takeaways: Vouchers not Votes, Endorsements and Money Dominate