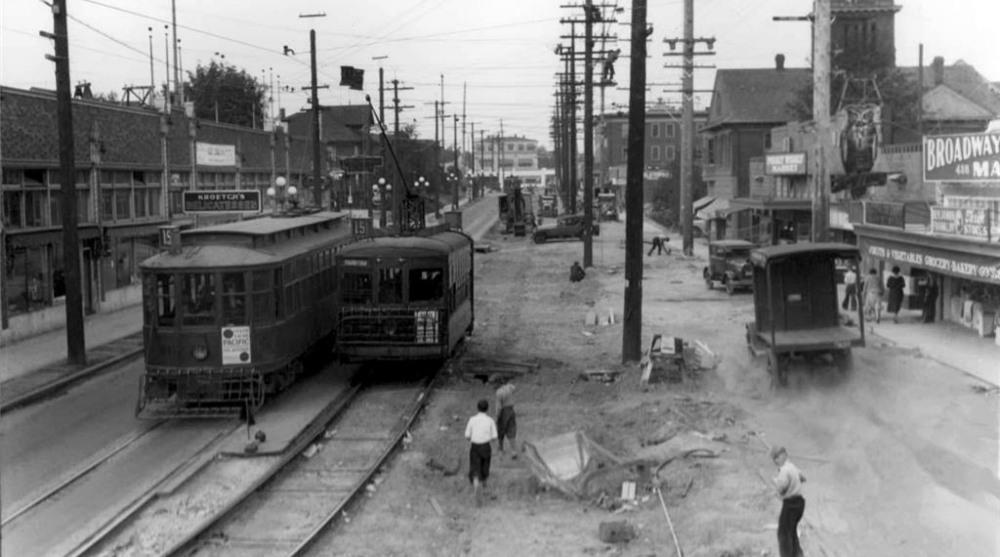 Part 2 of the author’s history of Seattle’s Broadway and the neighborhoods it
created and connected. Part 1 depicts the early history of the street. –Ed.

In the 1960s, federal funds and bold dreams resulted in a city sliced in half, cutting off Capitol Hill and First Hill from Seattle’s downtown.  Construction of the Seattle Freeway (Interstate-5) tore up hillside communities and invaded the downtown with ramps, traffic lights, dark storage spaces under the roads, and transit lanes.

The eastern border of the First Hill ridge, at an elevation of 344 feet, might be busy, is colorful 12th Avenue in the midst of Seattle University’s expanding campus.  To the north, Pike or Pine provide a saddle between Capitol Hill and First Hill. Looking southward, city planners sometimes cite busy Dearborn at the bottom of the cut (once chosen to be the city’s never-completed salt-to-fresh-water channel) but historical Yesler Way, the old Skid Road, is a more logical boundary.

Tying all this together is Seattle’s urbanist corridor, Broadway. The name derives from New York City under Dutch rule which created a “brede weg,” or “Broadway.”  There is a “Broadway” in virtually every American city.

Seattle has its own story. The first appearance of “Broadway” shows up on a plat filed in 1858 by A.A. Denny and William Bell. These founders’ Broadway was 80 feet wide and stretched from the Seattle waterfront at Front Street (today’s First Avenue) to Depot Street (now Denny Way).  It later assumed a new name: Broad Street. Subsequent plats in 1872, 1880, 1883, and 1890 used “Broadway” to describe a road from Mill Street (Yesler Way) northward across First Hill to Capitol Hill.

By the 1870s Capitol Hill and Broadway were rapidly changing.  The arrival of Klondike gold aboard the steamer “Portland” started a mad rush to Alaska and the Yukon.  Suddenly, buildings were rising by the week.  One consequential structure in 1902 was Seattle High School at the northwest corner of Broadway and Pine Street.  In 1908, the School Board adopted Broadway High School as the new name.

Across the street from the new Broadway High Nellie Cornish began her school of Music and Allied Arts, later moving up Broadway to Harvard Avenue and Roy Street.

Seattle University remains a major presence on Seattle’s “brede weg.” It  began inauspiciously in 1891 as an adjunct to a small parish church at Broadway and Madison.  Adrian Sweere, S.J., established a school named Seattle College.  The first bachelor’s degrees were granted in 1918.  In 1948, a dynamo named Father Albert A. Leimieux, S.J. came aboard and today’s Seattle University took off.  The new school was founded and taught by Jesuit priests.  Seattle realtor/philanthropist/historian Henry Broderick became a lifetime benefactor of the school.

Today Seattle U. occupies a 50-acre campus and is the largest independent university in the Pacific Northwest (7,000 students). In 1998, The campus Chapel of St. Ignatius, designed by the Seattle-nurtured Steven Holl won national honors from the American Institute of Architects.  The other big educational facility on Broadway’s Rue des Ecoles is Seattle Central College, serving about 16,000 students.

During the Depression a need for low-income housing became obvious.  The Federal Government initiated programs, including work and construction projects for roads, parks, bridges and national monuments.  The athletic field across from Broadway High School was a recipient of this help, including the installation of athletic fields, a running track, and a fountain in the middle of everything (now Cal Anderson Park).

Another name in this neighborhood is  The Watson C. Squire community, which more or less covers the holdings of Seattle University and surrounding streets.  Squire, a lawyer and Civil War veteran, was Washington State’s first U.S. Senator.  In one of his reports to Washington, D.C. Squire characterized our Far Corner as “Great and Growing.”

Broadway as the city’s central hilltop spine helps Seattle to deserve the ongoing reputation as “Great and Growing.”

Junius Rochester
Junius Rochester, whose family has shaped the city for many generations, is an award-winning Northwest historian and author of numerous books about Seattle and other places.
Previous article
Two Thrillers About Reinventing Yourself
Next article
Let’s All Pile on Rudy! (Except…)