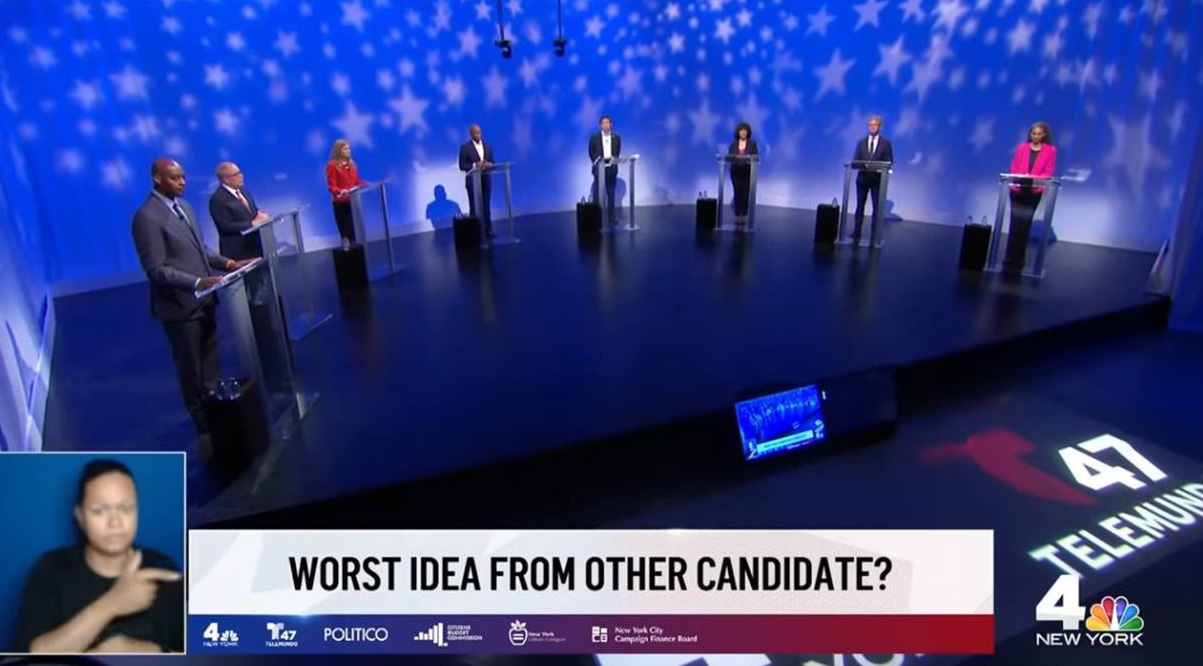 Soundness Versus Sound-Bites: Lessons for Seattle From NYC’s Mayoral Primary?

The winner of the Democratic primary and all-but-certain next Mayor of New York City will not finally be known until next month, although ex-cop Eric Adams emerged Tuesday with a healthy lead. Already clear are the definite losers in Tuesday’s primary — the loudly assertive activists on the party left. There may be a lesson here for Seattle politics.

Voters in the five New York City boroughs arrested growth of the party’s self-styled progressives, who have ousted veteran Congressmen and had their sights poised on City Hall. Instead, the frontrunner in ranked voting was a Brooklyn borough president and former police captain who delivered a relentless anti-crime message.

The message resonated, since NYC has experienced an upsurge in shootings, exemplified by weekend video of a gunman in the Bronx targeting a woman as two young children ducked in terror.  Hate crimes against Asian-Americans and the LGBTQ community have also surged.  Robbery and grand larceny crimes were way up this May over a year ago.

“If Mr. Adams wins in the coming weeks after absentee ballots and ranked choices are tabulated, his victory could stall the progressive movement’s momentum in New York and reinforce the idea that rising crime and public safety drove voters to the polls,” the New York Times reported.

Noisy Twitter liberals were not Adams’ favored constituency. Instead, he put together a coalition quite reminiscent to the constituencies who carried Joe Biden in South Carolina and on Super Tuesday  – older African American voters, Latinos, union members, blue-collar workers, and moderate voters in the outer boroughs of the city. “Adams used his approach on policing of saying we need justice and safety simultaneously to fuse together that traditional coalition,” Bruce Gyory, a Democratic strategist, told the Times.

The left’s champion, Maya Wiley, former counsel to Mayor Bill DeBlasio, ran on a platform of cutting $1 billion out of the NYPD’s budget.  She trails Adams by more than 9 percentage points, a margin she is unlikely to make up with absentees and second-choice votes. A trio of left candidates – Wiley, City Comptroller Scott Stringer, and nonprofit leader Diane Morales – took less than 30 percent of the vote.

The coalescing of New York City voters around crime and public safety concerns suggests a model for other cities set to elect new mayors this year. What about Seattle? The Emerald City’s murder rate for 2020 was at a 26-year high.  This week, The Seattle Times carries two headlines: “Man shot and killed at bus stop in Seattle’s Mount Baker neighborhood” and “Man found dead on Aurora Avenue North in Seattle.” President Biden has also got the message about the need to both reform and better fund police.

So far, the Seattle mayor’s race has been dominated by forums in front of left-activist groups. We hear recitation of progressive bromides, with identity politics thrown in.  The folks who “work hard and play by the rules,” using Bill Clinton’s phrase, get little courtship. Only occasionally does a candidate display impatience, as Bruce Harrell promising to get the tents off Third Avenue and boards off storefronts, or Casey Sixkiller criticizing (without names) the “homeless-industrial complex.”

Seattle’s culture is different from NYC’s. We do not have a concentrated constituency of conservative voters, like Staten Island where lots of police live.  Growth and attention have centered on younger technology folk: Older African American voters are not such a sizeable constituency and many are moving out of Seattle. Organized labor counts and is moving leftward, but is split. The business community is hesitant after Amazon’s $1.45 million investment in 2019 Council races triggered a reaction.

Of course, there are those who tell horror stories about radical Seattle on Fox News, e.g. radio host Jason Rantz and documentary maker Christopher Rufo. They deliver hyperbolic talking points for Republican candidates, burnish their right-wing media credentials, but have little following locally. Rufo has left his association with the local Discovery Institute and now hangs his hat at the Manhattan Institute.

So far, Seattle campaigns feature radical talk and extreme agendas. Consider this Facebook post from “(they/them) genderfluid femme” Council candidate Nikkita Oliver: “To fully support our Black Trans community members, we need to decriminalize sex work, poverty and drug crimes.”  Or this Tweet from Oliver: “Today we remember Charleena Lyles, who was murdered by the Seattle Police Department.” Seattle City Council member Kshama Sawant, facing a recall campaign, has taken up the Palestinian cause and tried to keep an Israeli ship from loading its cargo here.  She has lectured New York Rep. Alexandria Ocasio-Cortez on deficiencies in democratic socialism.

In a piece published by The Stranger on Tuesday, Seattle City Council president and mayoral candidate Lorena Gonzalez made a big deal out of refusing to respond to a candidate questionnaire by the Downtown Seattle Association, “given my strong differences with DSA’s downtown-only approach to economic recovery.”  She then demonized DSA as a major financial backer of the Compassion Seattle charter amendment on homelessness.

Critical questions need to be posed. How will these people govern? Can they govern? Will they entrench an echo chamber of interest groups? Would a qualified police chief dare come here if City Council members accuse his/her department of being murderers?  How would a Mayor Gonzalez deal with the urgent task of restoring downtown Seattle when she gives the back of her hand to downtown business? How would we move drug dealers off the streets if we decriminalize their work?

Looking at Adams’ showing in New York – and the late surge for former city sanitation manager Kathryn Garcia – brings to mind a long-ago candidate motto in Seattle: “Always Sound, Always Progressive.” It was the theme of City Council member Myrtle Edwards, one of the first liberals to break up what was a musty, crusty, reactionary council.

Progressive voters in NYC were looking for “soundness” more than sound-bites  In the race for Manhattan District Attorney, they turned to former deputy state attorney general and federal prosecutor Alvin Bragg. Bragg led another former prosecutor Tali Farhadian Weinstein in a contest that did not feature ranked voting. Far behind were three contenders from the left, one of them endorsed by Sen. Bernie Sanders.

As a teenager, Eric Adams was beaten by police. Within the force, he was an outspoken critic of excessive use of force. “I don’t hate police departments — I hate abusive policing, and that’s what people mix up,” he told the Times. Bragg, an African American, talked about being stopped and frisked at gunpoint by the NYPD, yet he resisted left-activist candidates’ demands that the DA’s staff be slashed in half.

Still, progressive-but-sturdy appears to have been the route to victory in NYC, with public safety and quality of life uppermost on the minds of voters.  Will any candidate in Seattle brave the Tweets and take this path? Not so far.