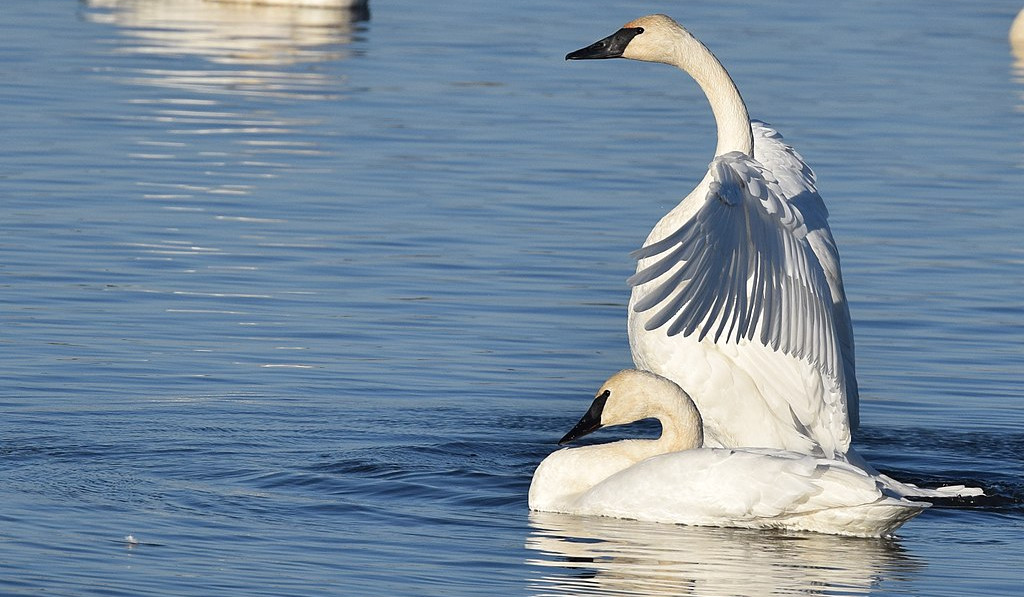 Black-and-white photos of regal Trumpeter swans and of a woman with close-cropped hair tossing grain to the birds, covered a golden oak table where the Connelly family normally took its meals. My mother was just back from Lonesome Lake, deep in British Columbia’s Coast Range, enthused with a species-survival story she was writing for Life magazine.

The wilderness homesteading family of Ralph Edwards, celebrated by a book author as  “Crusoe of Lonesome Lake,” preserved the swans in an isolated valley that was a last refuge. Hunted ruthlessly for their plumage, only an estimated 100 Trumpeters remained in North America.  About 30 of them wintered at Lonesome Lake.

The Edwards family, backed by the Canadian Wildlife Service, took to feeding them and did so for more than four decades.  Recovery of the species began in this remote locale. The wintering flock grew to 600 birds by the 1960s. In words of Ric Careless, vice chair of the B.C. Parks Foundation, “Lonesome Lake is where Trumpeter swans were saved from extinction.”

The Edwards clan is long gone from Lonesome Lake, its farm buildings destroyed by a long-ago forest fire.  A “re-wilding” has taken place at the lake, surrounded by the wilderness of Tweedsmuir Provincial Park.  What a wild place it is! The Atnarko River runs red with spawning sockeye salmon in the fall, and a large population of grizzly bears comes up from the Bella Coola River to feast off the fish. An estimated 140 species of migratory birds find refuge in waters of the Atlarko-Kliniklini Trench, flanked by peaks and icefields of the Coast Range.

Canada does not have the equivalent of our federal Land and Water Conservation Fund, which steps in to buy up endangered inholdings in national parks and wilderness areas (and helped finance our Lake Union Park.) The Nature Conservancy has moved north, but home grown preservation is still finding its feet. Enter the B.C. Parks Foundation, which steps in to do good deeds with private donations.  It bought up inholdings at Princess Louisa Inlet, a fabled fjord on the B.C. Coast.  It protected Ballernas Island in the Gulf Islands, a refuge of rare plant life rivaling Nature-Conservancy-protected Yellow Island in our San Juans.

The Foundation’s project this year is purchase of lands of the old homestead from Edwards’ descendants, who have moved out of the valley. Trudy (Edwards) Turner, the central grain-tossing figure in my mother’s pictures, became a lifelong correspondence friend. Under a purchase and sale agreement, the campaign must raise $695,000 (Canadian) by May 1.  It intends to incorporate the 153 acres of the old Edwards’ homestead into Tweedsmuir Park. If the campaign does not succeed, the land will be sold commercially.

Mountains, fjords and lakes of the British Columbia Coast are amazing.  Princess Louisa Inlet is a renowned destination for Seattle-area boaters. Knight Inlet and the Khutzameen Sanctuary north of Price Rupert, reached by float plane, are renowned grizzly-watching eco-tourist destinations.  (A surprisingly good-natured Prince Phillip was flown in to dedicate the Sanctuary in 1994.) The highest peak in the range, 13,188-foot Mt. Waddington, remains a world-class climbing challenge:  At age 19, famed Northwest climber Fred Beckey (with brother Helmey) made second ascent of the peak.

I’ve explored the Alplands, a plateau 2,000 vertical feet above Lonesome Lake.  John Edwards, Ralph Edwards’ son, for years ran a canoe rental business and camp on a miles-long chain of tarns.  We hiked across miles of meadows to the great escarpment of the Talchako River, with a view south to 11,862-foot Monarch Mountain and its icefield. We also stood atop Hunlen Falls, one of the world’s highest cataracts, which drains down into the Atnarko and Lonesome Lake.

I am hoping Canada lets us back into these wildlands. The COVID-19 pandemic must ebb but is showing a resurgence in British Columbia.  During the past summer and fall, with their southern border closed, British Columbians in large numbers discovered and rediscovered natural beauty in a province that exceeds Texas in size. The B.C. government limited camping in provincial parks to residents during the pandemic summer of 2020.

Until the Great White North reopens, readers can help save a wild place to which a float plane may someday take you. (Bring bear spray and mosquito repellant.)  For information on the Lonesome Lake campaign, call 604-343-3975 (Extension 1), or gifts@bcparksfoundation.ca. That way, you can do your part for an historic place in the great nearby.