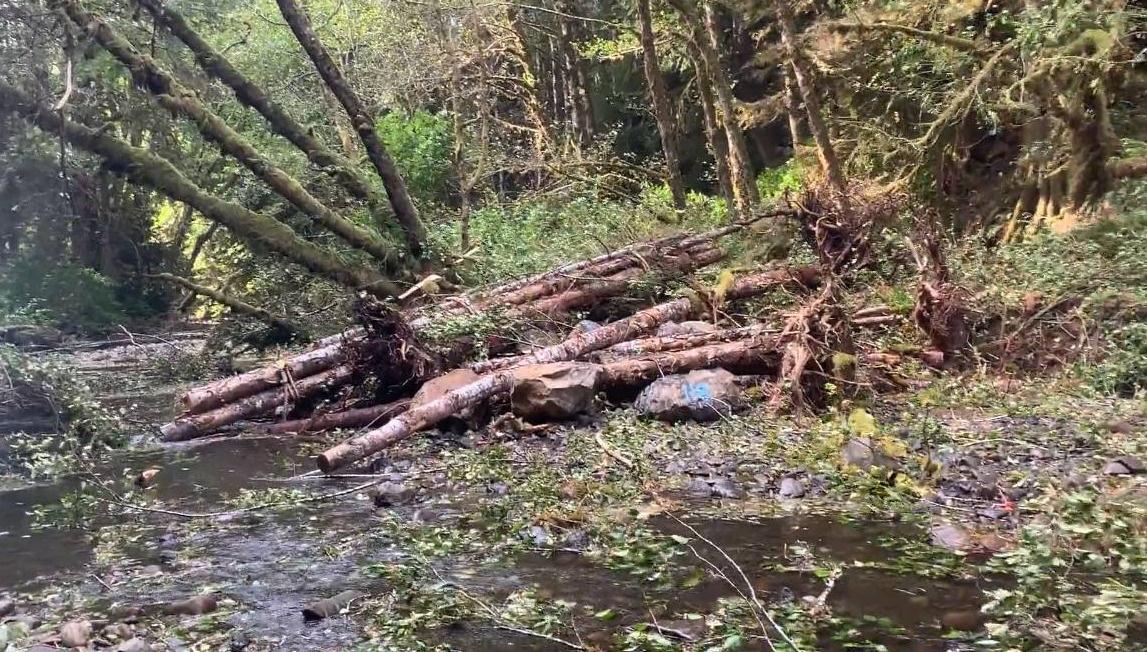 Several times on raw, cold fall and winter weekends, my friends Jason Bausher and Michael Bray head out to fish in Olympic coastal rivers.  I’ve long felt that the intensity of winter fishing enthusiasts surpasses any religious grouping in our state.

They encounter a variety of watersheds, from the protected rainforests of the narrow Queets Corridor in Olympic National Park to the once clear-cut Clearwater River, which gave the state Department of Natural Resources (DNR), in the Bert Cole era, its richly deserved nickname, the Department of Nothing Remaining.

“We can’t just let nature run wild,” the late Alaska Gov. Walter Hickel once declared.  Wally to the contrary, however, it’s possible to let nature run wild again. The Nature Conservancy is trying to do just that  on the Clearwater and tributaries. In 2014, TNC acquired 2,538 acres of overworked “working forest” in the Clearwater, with the goal of eventually creating a “mature old-growth forest” in a century or so,  on a river corridor that can again become “an incredibly productive salmon stream.”

In pursuit of these worthy goals, the Conservancy is currently installing wood logjams on Shale Creek, a tributary to the Clearwater and Queets Rivers.  With help from Columbia Helicopter, they are “building homes for salmon” in words of James Bass, TNC’s Olympic Field Forester. “Our goal today is to build, via placement of root wad, slash, and boulder, 8 to 10 woody debris jams in Shale Creek,” Bass wrote in a blog.  “We’ll go until we run out of materials or run out of money for operating the helicopter, whichever comes first.” (Salmon Recovery state grants are paying for the log jams.)

Large logs with big rootwads are chained together to create log jams that will add complexity (TNC’s word) to the riverbed, creating places for salmon to “rest, hide, and feed.” Bass describes what he is building as “Lincoln-log houses for salmon.” Bass adds, “The beauty of our forest reserve is not only can we grow trees to generate diverse habitat or timber resources, but we can grow the materials we need to restore the streams on our property.” Seedlings planted along Shale Creek will provide future forest canopy.

The Olympic Peninsula has become a living laboratory of efforts to restore and reestablish fish runs.  TNC has acquired an old-growth corridor along Ellsworth Creek near Willapa Bay, filled with contentious spawning salmon in the fall, and is restoring the surrounding 8,000-acre watershed.  Two salmon-destroying dams are gone from the Elwha River, opening 70 miles of spawning habitat.

Nature ought to be able to run wild.

Joel Connelly
I worked for Seattle Post-Intelligencer from 1973 until it ceased print publication in 2009, and SeattlePI.com from 2009 to 6/30/2020. During that time, I wrote about 9 presidential races, 11 Canadian and British Columbia elections‎, four doomed WPPSS nuclear plants, six Washington wilderness battles, creation of two national Monuments (Hanford Reach and San Juan Islands), a 104 million acre Alaska Lands Act, plus the Columbia Gorge National Scenic Area.
Previous article
Christianity Is Not a Religion. So what is it?
Next article
Pandemic Wallops Women: Behind a Persistent Gender Pay Gap