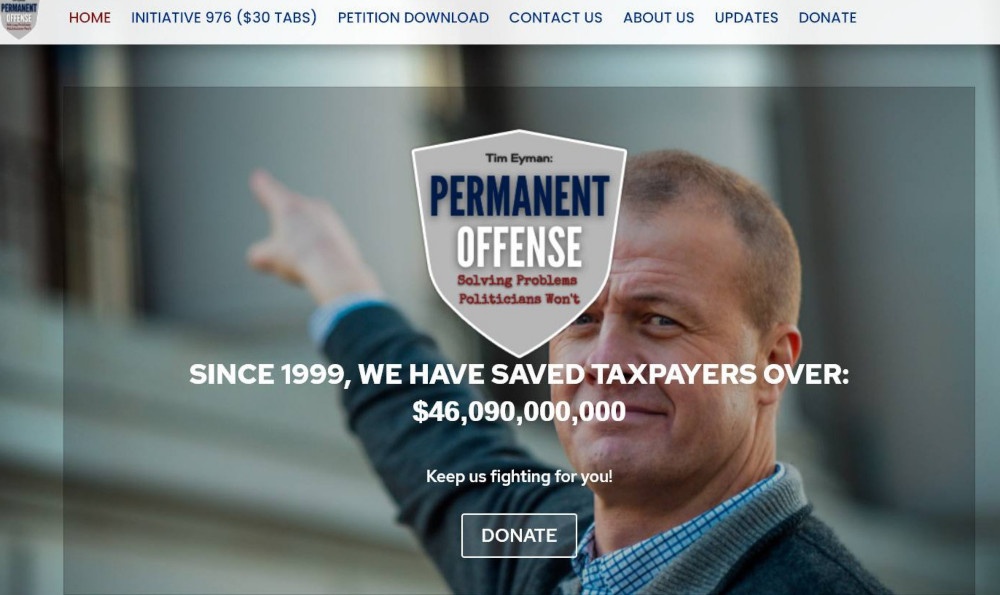 Judge to Tim Eyman: Do Something Else with the rest of your Life!

Attorney General Bob Ferguson has hit Tim Eyman with the “nuclear option” in a long-running civil suit, earning a judge’s ruling that hits the initiative promoter with a $2.6 million fine coupled with a ban on “managing, controlling, negotiating, or directing” financial transactions of any political committee.

More than 20 years after his initial 1999 $30 car tabs initiative, Eyman has in effect been told to do something else with the rest of his life. The $2.6 million fine is the largest in state history for a person’s campaign finance violations.  Ferguson has won an even larger judgment against the Grocery Manufacturers Assn. for laundering money to fight a 2013 initiative that would have required labeling of genetically modified foods.

Ferguson had sought treble penalties against Eyman — $7.8 million — but was celebrating victory in a Verdun-like legal siege begun in 2017.  “After 20 years of violating campaign finance laws, including two previous judgments against him, Eyman’s day of reckoning has arrived,” Fergy said in a statement.

“On multiple occasions, the state caught him illegally and intentionally concealing hundreds of thousands of dollars in campaign contributions that ended up in his personal bank account . . . This will not prevent Eyman from conceiving, drafting and promoting initiatives. It will, however, stop his practice of directing financial kickbacks into his personal bank account.”

Eyman was in court Wednesday to hear Judge Dixon read his ruling from the bench. The initiative promoter is also a relentless self-promoter.  Eyman has, however, been on a losing streak of late.  The courts have struck down his 2019 car tabs measure, aimed at Sound Transit.  He has had to pay more than $300,000 in contempt-of-court fines, for dragging his feet on turning over documents requested by the AG’s office.  He ran for Governor last year and fared no better than an also-ran in the August primary.

The AG’s case against Eyman initially centered on a $308,000 kickback from a signature gathering firm, and Eyman’s taking money donated to one initiative campaign and spending it on another.  The AG later got hold of emails in which Eyman and Citizen Solutions, his signature firm, discussed means of self-enrichment.

Separating Eyman from any role in campaign finance decisions is the heart of Judge Dixon’s ruling. “Mr. Eyman’s violations had a significant and material impact on the public,” the judge ruled.  “Mr. Eyman has personally benefitted economically from these allegations.”

“While Eyman tries to make it sound in his email missives that lots of other people are involved in his initiative factory, the reality is that he occupies every single key role,” Andrew Villeneuve of the Northwest Progressive Institute, longtime Eyman nemesis, said in an email. “Eyman is the CEO, the president, the chairman, the CMO, the CDO, the CFO, and so on.  He is the one and only decisionmaker.  Everyone else is subordinate, including his treasurers, who serve in a ministerial capacity.” (Under a previous agreement, Eyman cannot serve as a campaign treasurer.)

The state’s business community used and financed Eyman in his salad days. The Washington Legislature in 2010 came close to passing a per-barrel tax on oil, to pay for spill cleanup and better storm sewers.  The state’s oil refiners promptly underwrote an Eyman “supermajority” initiative campaign, requiring a two-thirds vote of each house of the Legislature for any revenue measure.

The Washington Food Industry Assn. was supporting Eyman’s I-1185 in 2012, a “supermajority” measure. But Eyman diverted money into I-517, which guaranteed initiative signature gatherers access to public facilities and entrances to stores.  Signature mercenaries at the Mukilteo ferry dock circulated petitions for both I-1185 and I-517. The food industry found itself unwittingly underwriting an initiative which restricted private property rights.  (I-517 made the ballot and was rejected.)

Newspapers have long featured pictures of a morose Eyman extending his lower lip, whether on nights when voters nixed his initiatives, or when Eyman cried when first admitting that he had lied and that he was taking money for his initiative efforts. “I have been working towards this day for 19 years, as of next Monday,” Villeneuve, who started tracking Eyman as a teenager, wrote on Monday.

Still, Eyman has enjoyed a Trump-like life of shaking off setbacks and revelations.  He filed for bankruptcy in the fall of 2018, citing financial burdens of AG Ferguson’s relentless discovery motions.  He was cited in February of 2019 for walking out of the Office Depot in Lacey with a chair he had not paid for. Yet, in November, voters approved another Eyman car-tabs measure, with a substantial indirect boost from a politically tin-eared Sound Transit.

Eyman did tell the Seattle Times he intends to remain politically active, despite the new restrictions. Of the fine, he said “Why not make it $26 million? They’ve already taken, the entire process has already taken, everything I’ve got.” (Eyman sent out a missive early Wednesday, predicting Judge Dixon would “rubber stamp the AG.” An emotional post-decision appeal for sympathy and money is expected shortly.)

Bob Ferguson was a champion chess player before entering politics.  He has applied skills to the political  game, outworking and out-thinking two underachieving King County Council incumbents, and then blunting TV thrusts from the Republican AG’s association in his 2012 campaign to head the state’s largest law firm.

He has been unrelenting in pursuit of Eyman’s initiative empire, brushing off ceaseless hyperbole, self-pity, and baseless attacks from the initiative promoter. Eyman has run into an iron law of state politics:  Nobody outworks Bob Ferguson.

Joel Connelly
I worked for Seattle Post-Intelligencer from 1973 until it ceased print publication in 2009, and SeattlePI.com from 2009 to 6/30/2020. During that time, I wrote about 9 presidential races, 11 Canadian and British Columbia elections‎, four doomed WPPSS nuclear plants, six Washington wilderness battles, creation of two national Monuments (Hanford Reach and San Juan Islands), a 104 million acre Alaska Lands Act, plus the Columbia Gorge National Scenic Area.
Previous article
How you could end up Paying a State Billionaire Wealth Tax (uh-oh!)
Next article
Impeachment 2.0: Of the Mob, By the Mob, For the Mob