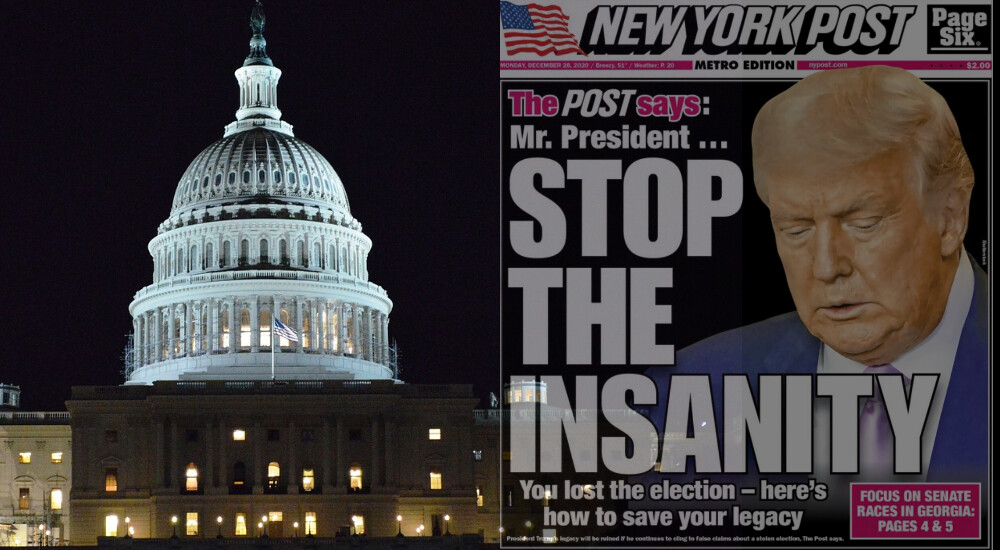 At some point as we rush toward a January 6 congressional donnybrook, we seem to be crossing over from “very angry, enraged” to “mentally disturbed, deranged.” This is patently true of the president of the United States. His hour-long harangue and threats in a Saturday phone call to Georgia’s secretary of state certainly points to the latter description. His total refusal to accept defeat in a race that is clearly lost becomes more psychotic by the day.

It is without precedent, as nearly everything Donald J. Trump does, but his mental state is only one of the dangers in sight. The greatest danger is from his enablers, who seem willing to participate in a bloodless coup, only slightly more dignified than that of Latin American dictatorships.

Skip over the Ted Cruzes, the Josh Hawleys and others who are simply whoring for the Trump base. They are not “mad” by either definition. They are posturing for 2024. The concern of thoughtful Americans should be the minions who will descend on Washington D.C. and state capitals on Tuesday; many will carry weapons, all will be mad in the “angry” sense, some may be mad in the “mentally disturbed” sense. The period from January 6 to January 20 will be one of the most fraught in the last century of our political journey.

We have seen close presidential elections before: John F. Kennedy in 1960, Richard Nixon in 1968, George W. Bush in 2000, even Trump himself in 2016. In all cases, the loser accepted his or her fate, often with dignity and grace. Trump has thrown all this precedent to the winds.

Back in the days when bipartisan solutions to serious problems were still possible, Congress passed and the nation approved in 1967 the 25th Amendment to the Constitution, which provided a process in which a president could be declared physically or mentally incapacitated by declaration of the vice president and a majority of the cabinet officers. The vice president would take over until the president recovered; the president would not be removed from office. Most discussions of the process centered on physical disability, such as heart attack or stroke (presidents Wilson and Eisenhower) or grievous injury (Reagan). But both Democratic and Republican sponsors made it clear that mental debility was also covered.

Language of the amendment also allows Congress to set up a body that could recommend to Congress that the president is “unable to discharge the powers and duties of his office,” and Congress could then place the vice president in charge until the president recovered. In October, House Speaker Nancy Pelosi floated the idea of such a process after Trump was hospitalized for Covid-19 treatment, but the move was short-lived. Clearly, both because of timing and makeup of Trump’s cabinet, a 25th Amendment remedy was never on the table.

What should be clear, however, is that Trump’s frontal attack on American elections and the threat of a bloodless coup must call forth a vigorous response from leaders of both parties. What should be obvious is that Trump’s mental struggles will not cease when he leaves office, nor will his cult-like hold on millions of Americans. There is no instant fix, only a long, hard slog to return sanity to American political life.

An enormous burden has been placed on the shoulders of President-elect Joe Biden, but an equally important burden is on those Republican senators and members of Congress who have rejected the Trump Kool-aid and will vote to ratify Biden’s victory on Wednesday. The handful who have spoken out and warned constituents not to buy Trump’s fantasies must be joined by others before a once-proud Republican Party becomes a reality show with guns.

It starts with voters—and media—calling out names of Senate and House members who supported this sham and sided with Donald Trump over the audited and certified votes of American citizens, including their own constituents. All House members run again in 2022 and a third of the Senate; the pushback shouldn’t wait until then.

As of January 4, 2020, these Republican US Senators say they’ll object to Joe Biden’s certification.

As of January 4, 2020, at least 140 Republican members of Congress say they’ll vote against certification.

Floyd McKay
Floyd J. McKay, emeritus professor of journalism at Western Washington University, covered Pacific Northwest politics as a reporter and opinion writer for four decades, primarily in Oregon. He was commentator/news analyst at KGW-TV (King Broadcasting) from 1970 to 1987. Previously a print reporter, he returned to print and online reporting and commentary from 2004 to 2017 with the Seattle Times Op-ed page and Crosscut.com. He is the author of Reporting the Oregon Story: How Activists and Visionaries Transformed a State (Oregon State University Press, 2016). He lives in Bellingham.
Previous article
The Big Lie and the Weaponizing of American Politics
Next article
The Psychology of Losing: Why Republicans Cry Foul Over Election