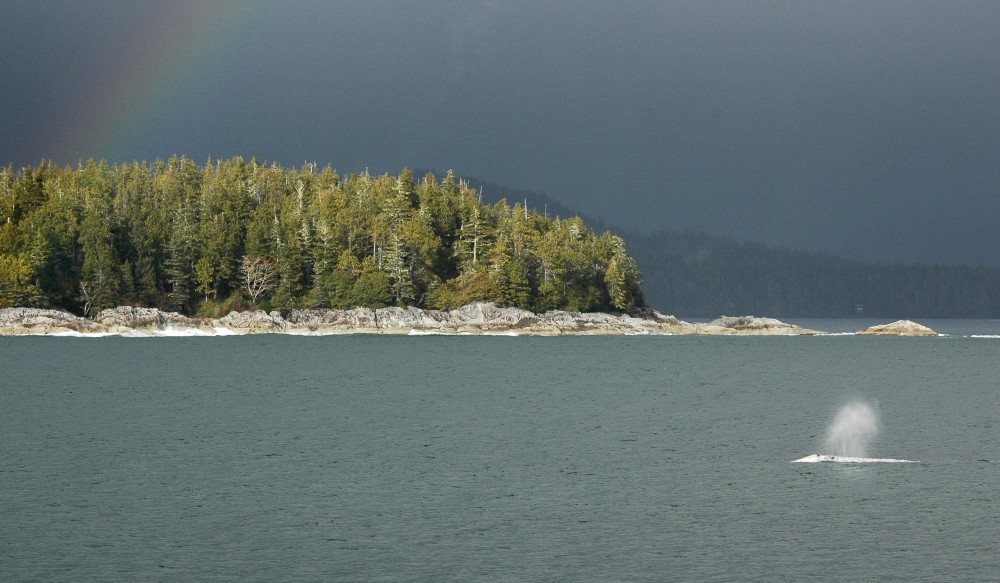 Clayoquot Sound, on Vancouver Island, was ground zero of large environmental protest in Canada, and has drawn international attention as the last stand for intact coastal rain forests of “Beautiful British Columbia.”

This writer has fond memories of its inlets, breaching whales, and bird life. We traveled by Zodiac boat up Bedwell Sound, flanked by cathedral forests.  We inspected the furthest thrust of logging roads, and were buzzed by a helicopter with the insignia of forestry giant MacMillan Bloedel.

The great fjordland has just acquired a new and unlikely benefactor in the person of Jeff Bezos.  The Amazon CEO has committed $10 billion to a Bezos Earth Fund, which has just let out $791 million to 16 groups.  The Nature Conservancy (TNC) has received $100 million, with plans to target a chunk of the money to Clayoquot Sound.

TNC and its Canadian affiliate, Nature United, plan to work with Aboriginal First Nations on preservation of 250-300,000 acres of ancient forests, which enjoy varying degrees of protection, and to give natives a greater stake in the area’s flourishing tourism economy. The British Columbia government recently announced a new old-growth policy with deferrals of logging in Clayoquot Sound and elsewhere in the province.

“Clayoquot Sound continues to be critical,” said Tyson Atleo, a leader of the Ahousaht First Nation, and The Nature Conservancy’s economic development lead for the region.  It is, he adds, “a catalyst to change how we do things” away from the longstanding practice of the province granting tree farm licenses to timber companies.

TNC and Nature United are also planning similar projects centering Indigenous authority and stewardship through what it calls the Emerald Edge region — coastal temperate rainforests from Washington, along the B.C. Coast and into Southeast Alaska. “Nature United is thrilled to scale our support of Indigenous leadership, expand the deployment of First Nations’ sustainable land use vision for Clayoquot Sound, and advance nature-based climate solutions across the Emerald Edge,” said Hadley Archer, executive director of the Canadian affiliate.

Back in the 1980s and 1990s, clearcuts in places like Kyuquot Sound, further up the coast of Vancouver Island, drew international attention.  They stretched from shore to summit -– some coastal islands were completely scalped -– giving British Columbia an unwanted nickname:  The Brazil of North America. The first successful protest came when the province gave MacMillan Bloedel a green light to clear cut Meares Island, directly across from the tourism center of Tofino and home to the native village of Opitsaht.

Anti-logging protests drew grade B American celebrities.  Activist Tom Hayden took his third bride (post Jane Fonda) to the shores of Meares Island.  Robert F. Kennedy, Jr., was carried ashore in a canoe.  The British Columbia press was soon filled with speculation that protesters from “the States” were secretly in cahoots with American forest firms. Ultimately, it was locals -– chiefs of the Ahousaht and Tia-o-qui-aht First Nations -– who persuaded British Columbia courts to halt logging on crown land.  Aboriginal land claims, raised on behalf of 800-year-old cedars, had legal standing. So did threats of international boycotts of B.C. forest products.

Vacationing Canadians would head for a protest camp, located beside a hideous clearcut nicknamed the “black hole.”  They would head for a bridge over the Kennedy River, major access for logging trucks.  The protesters would block the road, sing “O Canada” while being hauled away by the RCMP.  Then, many would go on to enjoy ocean beaches of Pacific Rim National Park.

The British Columbia government backed down.  It scaled back logging plans, expanded Strathcona Provincial Park to include the Megin River valley, and saw designation of a Clayoquot Sound Biosphere Reserve by UNESCO. The remaining logging tenures in Clayoquot Sound are now controlled by Aboriginal First Nations logging companies.

Clayoquot Sound encompasses 800,000 acres, a big laboratory for forest preservation, retooling an economy once based on plunder, and giving Aboriginal First Nations a cut of it. Heading out of Tofino on a water taxi or Zodiac boat is one of life’s exhilarating experiences.  Where to go?  Flores Island holds a big protected tract of ancient forest, popular hot springs, an ecotourism lodge, and a Native reserve for the fast-growing Ahousaht First Nation.

Jeff Bezos has served as demon and target for Seattle’s militant left, notably Trotskyite City Council member Kshama Sawant.  Amazon has transformed the urban environment of Seattle.  It has stumbled in that political environment, spending $1.4 million on 2019 City Council races, only to see five of its candidates cut down.

The Bezos Earth Fund appears to stand on firmer ground.  Other familiar environmental groups -– the Natural Resources Defense Council, Environmental Defense Fund, and World Wildlife Fund -– are getting a financial boost as are less established groups.

Clayoquot Sound is a gorgeous and wild corner of God’s earth, its cathedral forests quite able to sequester much carbon, its Aboriginal First Nations stewards and defenders of the place for some 4,000 years. Well worth a visit, when the Canadians let us back in.

Joel Connelly
I worked for Seattle Post-Intelligencer from 1973 until it ceased print publication in 2009, and SeattlePI.com from 2009 to 6/30/2020. During that time, I wrote about 9 presidential races, 11 Canadian and British Columbia elections‎, four doomed WPPSS nuclear plants, six Washington wilderness battles, creation of two national Monuments (Hanford Reach and San Juan Islands), a 104 million acre Alaska Lands Act, plus the Columbia Gorge National Scenic Area.
Previous article
More Coronavirus Victims: Women in the Workplace
Next article
Blinded by the Light: How Washington State Signed on to Year-round Daylight Saving