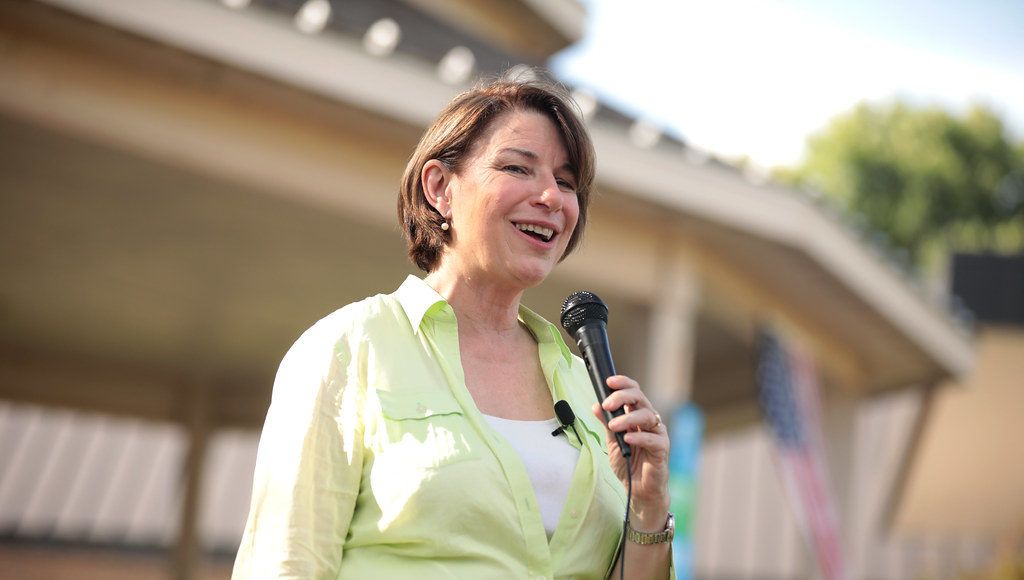 Democratic Voters Swing Left, But Moderates Still Have an Edge

I urgently hope William Saletan is right in saying in a Slate article that centrist candidates are winning the Democratic presidential primary race this year. He implies that the party will nominate a moderate to head the ticket, and I think that’s vital if Donald Trump is to be beaten. The stakes could not be higher. I think our democracy depends on it.

At the moment signs look favorable. In national polling, the moderates–Joe Biden (with 28 percent in RealClearPolitics.com’s averages), Pete Buttigieg (7.2) Michael Bloomberg (7) and Amy Klobuchar (3)–are running ahead of the left progressives Bernie Sanders and Elizabeth Warren (both 20), for a net lead of five points.

In Iowa, the moderates also are running a net 13 points ahead of the progressives. In New Hampshire, though, it’s just five.  In Nevada, the race is within the margin of error. In South Carolina, the moderates lead by 14.

But the voting hasn’t begun and the Democrats could still blow it. If Socialist Sanders or Wealth-Tax Warren ends up the nominee—with platforms well outside mainstream American opinion—Trump could be re-elected. If he is, he’ll feel validated and empowered  to act like a king (beyond the law) and, with Attorney Gen. Barr doing his bidding, investigate or prosecute his political foes.

At the moment, Biden leads Trump nationally by just four points, Sanders by 3. Bloomberg, Warren, and Buttigieg all are basically tied with Trump in head-to-head matchups. In swing states, Biden, Sanders, and Warren have narrow leads in Michigan, Pennsylvania, and Ohio. Florida is basically tied and so is Wisconsin.

As to the second of Saletan’s theses—that progressives have “won the decade”—he’s only partially right. The Democratic base certainly identifies itself as more liberal—from 27 percent in 2000 to 47 percent in 2019, according to the Pew Research Center.

Saletan is right about the respect and importance with which Democratic candidates treat minorities and women. They have to, because those groups make up a larger portion of those who identify as Democrats.

On social issues, Democrats definitely are more liberal than they used to be. The percentage of Democrats who say that immigrants make America stronger has risen from 52 in 2009 to 83 percent in 2019. In 2009, 55 percent favored gay marriage. Now, 75 percent do. And the percent believing that the nation must do more to foster black equality has risen from 57 to 83.

On some other issues, Democrats also are overwhelmingly liberal. Seventy-seven percent say they support Sanders’s Medicare for All proposal—though 88 percent support a public option’s being added to Obamacare, the position of Biden, Buttigieg and Klobuchar.

However, Saletan is simply wrong when he says that the public option was deemed “unacceptably left wing” in 2009. In fact, the Democratic House’s Obamacare bill that year contained a public option and President Obama favored it. It was killed by the Senate Finance Committee because even Democrats who favored it thought the whole bill would go down in the Senate if it was included.

The party would do better nominating a candidate who favors the public option than Medicare for All. Among all voters, 53 percent say they support MFA (though the number goes down when they are told private insurance plans would go away), but 65 percent support the public option.

According to a Quinnipiac poll in April, by 60-34 percent voters said they supported Warren’s 2 percent annual tax on wealth over $50 million. But there’s reason to think the number would go down when voters understand the complexity of collecting the tax, its possible unconstitutionality, and the probability that it can’t pass Congress. The same poll found that by 59 percent to 36 percent, voters oppose Sanders’s idea of raising the top income tax rate to 70 percent.

On climate change, Democratic candidates are more likely than in years past to say it’s an “existential issue” requiring drastic measures, but they are not far out of mainstream opinion. Fifty-six percent of all voters think climate change is an emergency, including 63 percent of Independents.

Saletan doesn’t directly address this question, but his logic more or less implies he thinks that the moderate advantage in 2020  is not the wave of the party’s future and progressivism is. The media’s lionization of the four-member left-wing “squad” in the House would suggest that’s right.

But the fact is that the moderate New Democrat Caucus chaired by Washington Rep. Derek Kilmer is larger than the House Progressive Caucus. And Democrats’ 2018 takeover of the House was made possible by moderate candidates’ winning seats formerly held by Republicans.

Moreover, House Speaker Nancy Pelosi, a canny politician if there ever was one, has switched from being a “San Francisco liberal” in 2009 to now being a relative moderate who shows disdain for the “squad.”

Whether left-progressivism or relative moderation ends up being the party’s ultimate identity obviously is yet to be determined. But for 2020—and hopes of beating Trump—I desperately hope Saletan is right about moderates’ now being dominant.